Gov. Andrew Cuomo dismissed the suggestion last week that the introduction of a Women’s Equality Party pledge was aimed at his Republican rival, but campaign surrogates ensured today that Rob Astorino would be directly in their crosshairs.

Former Council Speaker Christine Quinn, a leader of the WEQ–an effort created at least in part as a Cuomo campaign tactic to highlight the Westchester county executive’s socially conservative views–said she would be delivering the pledge to Mr. Astorino this afternoon, putting him in the position of likely rejecting a promise to pass legislation that would strengthen pay equity and abortion laws.

“I want to know: why does Rob Astorino think that I am and all the women up here less than he is,” Ms. Quinn said at press conference in Grand Central Station, where she was joined by women’s rights groups and several elected officials. “Why does he think we’re only nine tenths people? Why does he think we don’t deserve equal pay–trust me, when I was speaker I bet I worked harder than Rob Astorino has ever worked as county executive, or equally as hard. I dare him to tell me I deserve less.”

Ms. Quinn, who has emerged as a leading surrogate for Mr. Cuomo, promised to deliver the pledge–which asks lawmakers across the state to support the passage of all 10 points of the controversial Women’s Equality Act, which has died in two consecutive sessions–to Mr. Astorino in Midtown, where he is fund-raising with retired business executive Carly Fiorina. Ms. Quinn blasted Mr. Astorino for associating with Ms. Fiorina, a former Republican candidate for U.S. Senate in California who opposed same-sex marriage and abortion.

When Mr. Cuomo unveiled the pledge last Thursday in Manhattan, he explained that it was created to force state legislators to declare on the record whether or not they would support all 10 points of the Women’s Equality Act. When the Observer asked Mr. Cuomo if the pledge was intended for Mr. Astorino, Mr. Cuomo was blunt.

He added, “The legislature is now running for re-election and what we’re saying is we want a legislature that will pass the Women’s Equality Act and we have a right to know who’s going to pass it, who’s not going to pass it before we vote.” (Ms. Quinn said today she was speaking for herself, not Mr. Cuomo, and that the governor said he was targeting “all people running at the state level.”)

The act ran into several obstacles in past sessions. Some conservative lawmakers were uncomfortable with backing the legislation because of a provision that would codify the Roe vs. Wade Supreme Court decision on abortion into state law. Others–Mr. Astorino included–backed nine out of the ten points but questioned a plank that would allow women to get abortions within 24 weeks of pregnancy and provided new protections for doctors performing abortions.

“It’s sad to see Christine Quinn playing politics with women’s rights,” stated Jessica Proud, a spokeswoman for Mr. Astorino. “Rob has repeatedly called for passage of 9 of the 10 points, but like the majority of pro-choice New Yorkers, he is opposed to abortion in the 9th month performed by non-doctors.”

In response, a spokesman for Mr. Cuomo, Matt Wing, slammed Ms. Proud for misrepresenting the legislation in her statement to the Observer. 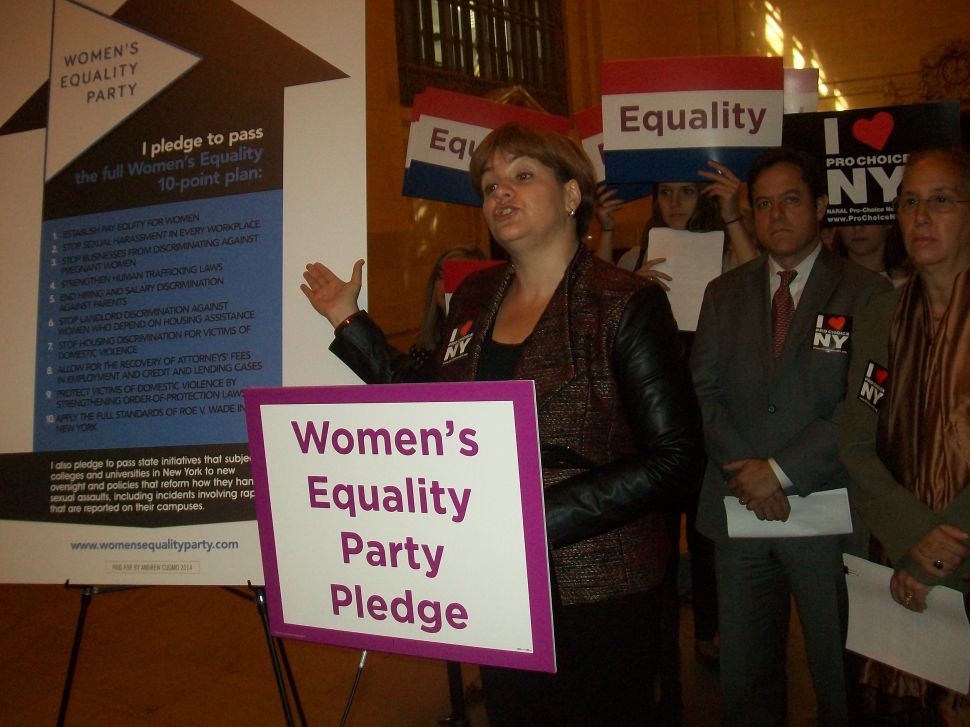