Everyone from professional photographers to Martha Stewart is using little quadcopter drones to take stunning landscape videos and aerial photographs. But if you’re a glass-half-empty type — or maybe just a shoot-that-drone-out-of-the-air type — there’s now a handy tech toy to defend you from unwanted surveillance.

An upcoming device called Cyborg Unplug will allow you to disrupt the connections of drones, Google glass, wireless microphones, and other devices to your WiFi connection. The project is led by Glasshole-hater Julian Oliver, and lists the dystopian ‘Stop the Cyborgs’ campaign as an inspiration and “conspirator.”

“Whether business office, restaurant, school or nightclub: it’s your territory and your rules, so make it harder for those that seek to abuse it,” the Cyborg Unplug site says.

The small device “sniffs the air” for the WiFi signatures of unwanted surveillance devices and automatically disconnects them from the network it’s assigned to protect. Cyborg Unplug will be up for sale in the $50 – $100 range on September 30. So far, it can’t interrupt Bluetooth connections, but they’re working on that.

Besides protecting your own network, the device also has an “All Out Mode” that can disconnect unwanted devices in range from every network they’re connected to, including tethered cellphones.

The trouble is, this is totally illegal in America. In the FCC’s own, unambiguous words:

We remind and warn consumers that it is a violation of federal law to use a cell jammer or similar devices that intentionally block, jam, or interfere with authorized radio communications such as cell phones, police radar, GPS, and Wi-Fi.

On the Cyborg Unplug site, they absolve themselves of all responsibility should you run into trouble with the law.

“We take no responsibility for the trouble you get yourself into if you choose to deploy your Cyborg Unplug in this mode,” the site says.

Drones? They’ve got your back. But when it comes to the Feds, you’re on your own. 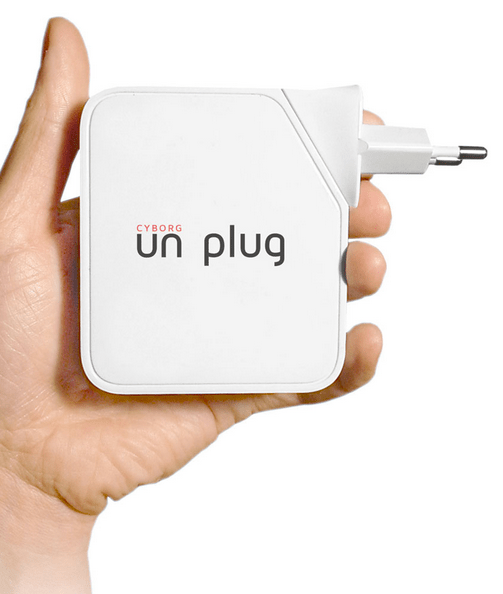