National Democrats have launched their second television ad attacking Congressman Michael Grimm over his indictment — reprising the tagline “Can you believe this guy?”

The advertisement will begin airing today, the DCCC told the Observer.

The national Democrats are cautiously optimistic they can take the the state’s 11th congressional district, spanning all of Staten Island and part of Brooklyn, where Democratic challenger and former Councilman Domenic Recchia is trying to unseat Mr. Grimm, a Republican, as he battles his legal woes and campaigns on a shoestring budget.

Last week, Congressman Steve Israel, chair of the DCCC, told the Observer they’d launch an “unprecedented” field operation in the race, and the Associated Press reported the DCCC would spend $950,000 on television ads in the race between August 12 and October 13.

Like the first advertisement, the 30-second spot focuses Mr. Grimm’s indictment on mail and wire fraud and tax charges related to a restaurant he owned before taking office. It splices footage of Mr. Grimm with footage of U.S. Attorney Loretta Lynch — complete with her name on the screen for anyone who might not recognize her — as she speaks about the charges. While the ad maintains the same style as the first, it’s a tad less visually busy.

“Conspiracy to defraud the United States. Mail fraud. Wire fraud. Perjury. All was part of his scheme to evade taxes,” Ms. Lynch says in the footage shown in the ad. “Michael Grimm made the choice to go from upholding the law to breaking it.”

The ad also makes use of excerpts from newspapers like the Staten Island Advance and the New York Post — some of them the same phrases as used in the first ad, including the Advance’s use of “cringe-worthy” to describe the congressman.

The spot also includes footage of Mr. Grimm standing next to his political mentor and the former occupant of the congressional seat, Guy Molinari, at a 2012 campaign event before he was indicted.

“I’m very proud of who I am and what I’ve done,” Mr. Grimm says in that clip.

It ends on another line from Mr. Grimm, this time uttered the day of his indictment: “I will not abandon my post. I have an election to win.”

Layered over Mr. Grimm are the words: “Can you believe this guy?”

Mr. Grimm has been unable to respond with television advertisements of his own, after his indictments ended the flow of cash to his campaign from national Republicans. He has few paid campaign staffers — though Mr. Molinari, 85, who helped launch Mr. Grimm’s first campaign, has said they meet regularly to discuss the race. In the last monthly filing period that campaign contributions were available to the public, Mr. Recchia raised 11 times more than Mr. Grimm, who had pulled in just $23,430, most of it from just 18 donors.

Still, the congressman is a skilled retail politician who has been shaking hands and taking selfies a slew of local events all summer long, and he remains popular with many in his district. He has dismissed the charges against him as a plot by Democrats and President Barack Obama to rid the city of its lone Republican in Congress, and has offered a refrain in his social media messages to his supporters: “I’ve got your back.” That could resonate in a district that often feels at worst targeted for unfair policies like high tolls, and at best forgotten by government.

Mr. Israel noted last week that many people haven’t been paying attention to the “fairly amorphous” indictments against Mr. Grimm — but the DCCC’s ad campaign is certainly looking to change that. In addition to the television ads, the DCCC is also using the “Can you believe this guy?” tagline in paid promoted messages on Twitter targeting Mr. Grimm’s legal woes.

The two DCCC ads stand in stark contrast to the first television ad released last month by Mr. Recchia’s campaign, “Saturday,” which makes no mention of Mr. Grimm. Instead, it seeks to introduce Mr. Recchia–who lives in the Brooklyn part of the district, long thought to make winning very difficult–to Staten Islanders by showing a “typical” Saturday driving back and forth between Brooklyn and Staten Island.

The feel-good ad boasts Mr. Recchia’s Staten Island ties — his mother lives there — and shows him as a family man, attending barbecues and dropping off his daughters at dance class. (Mr. Grimm is a bachelor.) It also says Mr. Recchia will fight to lower the toll on the Verrazano-Narrows Bridge connecting the two boroughs he so often has to traverse — a popular policy on both sides of the bridge.

You can watch the new DCCC ad below: 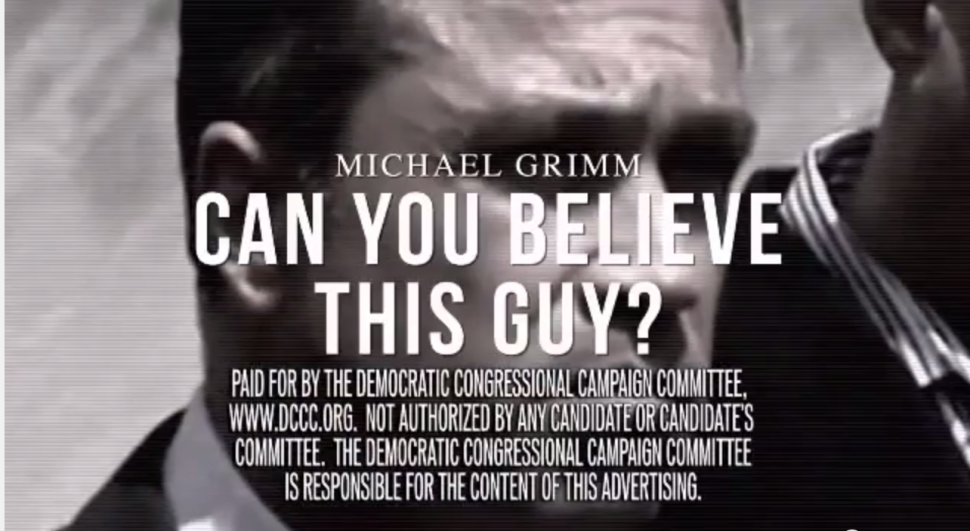