Mayor Bill de Blasio said today legislation with the eventual goal of banning the city’s horse carriage industry — a campaign promise he said he’d get to on “day one” — will be introduced soon.

“We’re about to see legislation introduced that I think will start us rapidly down the road to the changes we have to make,” Mr. de Blasio told the Observer in Manhattan after an unrelated press conference. “Of course, there will be a full legislative process, and we’ll work closely with the City Council. But that legislative debate is about to begin.”

Pressed by the Observer on whether that bill would be an outright ban on the industry or a compromise to keep the horses in Central Park, Mr. de Blasio was opaque.

“When the legislation is presented, you’ll see it. I think the notion is to go as far as we can go in the terms of the pathway to an ultimate ban,” he said.

The mayor’s campaign promise to ban horse carriages won him support from animal rights groups including NYCLASS, which ran a massive independent expenditure against his primary opponent Christine Quinn that helped Mr. de Blasio. But it has put him in opposition to several groups that are normally allies of the mayor — including the politically powerful and influential Teamsters and the Working Families Party, which have backed the horse carriage drivers.

Just this week, Councilman Rafael Espinal, who chairs the Consumer Affairs Committee that regulates the industry, was joined by the Teamsters when he announced he would oppose efforts to ban the industry — which means advocates in the Council will likely need to find a  new committee through which to introduce the bill.

The mayor characterized his “day one” goal as an “aspiration” today.

“Why it’s taking so long is it is a very complicated issue, and I expressed my aspiration and like many, many issues you talk to everyone involved, and you talk to the legislators, and it turns out there’s a lot of details that have to be addressed,” Mr. de Blasio said.

NYCLASS — which has grown frustrated with the pace of getting a ban passed — praised the mayor’s comments Friday.

Christina Hansen, a spokeswoman for the horse carriage drivers, in turn accused NYCLASS and other groups of lying about carriage horses — but said that as people learn more about the carriage horse industry through continued coverage of the issue, New Yorkers are showing carriage drivers “more support than ever.”

“He’s been saying that this was going to happen ‘soon’ since January, and ever since January we’ve had four consecutive Quinnipiac Polls showing overwhelming support from New Yorkers” for keeping horse carriages in New York, Ms. Hansen said. 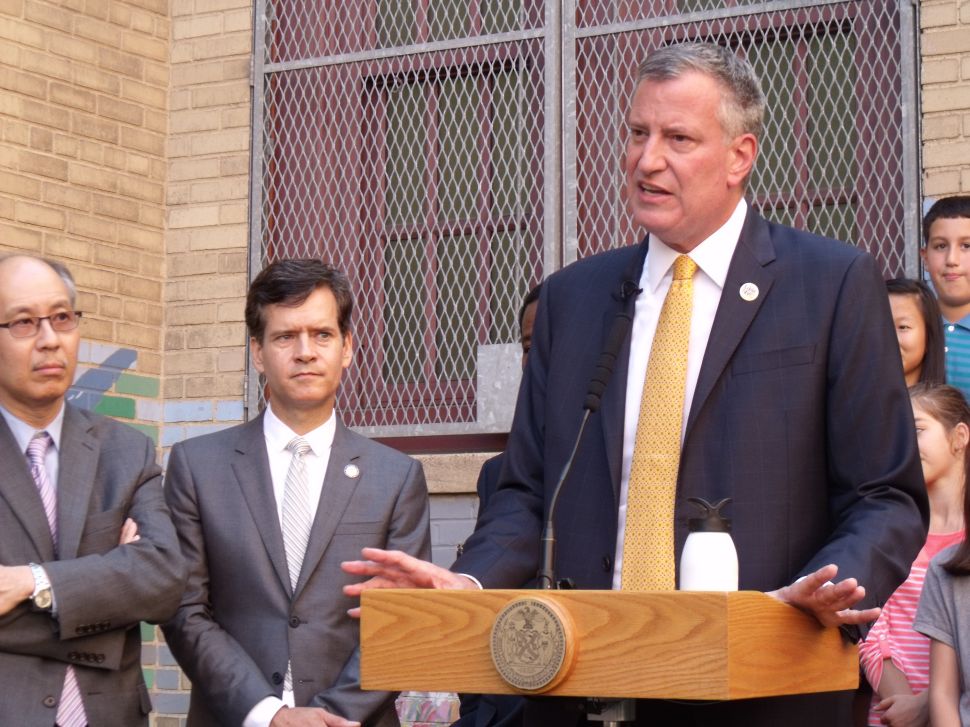