Mr. de Blasio said that he chose to bypass the largely compliant, progressive-dominated City Council in raising the “living wage” payment bar so that the new standard could apply to city-subsidized projects already underway, such as the Hudson Yards development. The mayor estimated the order would increase the income of roughly 18,000 New Yorkers and improve quality-of-life in low-income neighborhoods like the Mott Haven section of the Bronx, where the press conference and signing took place.

“People are struggling. They’re working harder and harder, and they’re not getting by. The median income right where we’re standing, the median income is just $20,000,” Mr. de Blasio said. “You do not need to be a math major to know that $20,000 a year doesn’t cut it in New York City, and people have to do better.”

The measure, which Mr. de Blasio promised to sign in his State of the City address, applies to any company receiving at least $1 million in city subsidies, and will now cover tenants renting space within subsidized buildings — meaning it will reach retail and food service employees in addition to construction workers and contractors.

Mr. Perez noted Congressional Republican resistance to President Barack Obama’s proposal to boost the national minimum wage to $10.10–and argued Mr. de Blasio’s executive order, though it is less broad than a minimum wage hike, was a natural response to a lack of action on the federal level.

“What do you do when that happens? Well, you do exactly what the mayor, and the speaker, and the borough president and everybody around here is doing. You take matters into your own hands,” Mr. Perez said. “That’s what you’re doing. Because people can’t afford to be patient, when they’re making choices, unconscionable choices between a gallon of milk and a gallon of gas.”

Ms. Mark-Viverito–who represents Mott Haven as well as East Harlem in Manhattan–said she had no objection to the mayor’s decision to circumvent the Council, instead arguing that the executive order builds upon wage-raising legislation the Council voted on in past years. She said argued that fast action was needed to combat wealth disparities both nationally and locally.

“Of all the industrialized nations, we have the third lowest minimum wage, and then you bring it down at a granular level where we have in New York City the greatest income inequality in this nation,” Ms. Mark-Viverito said. “We’re in the Bronx today, my district, to send a very simple and direct message: that New York City will take care of its workers. We are a city that is dedicated to lifting people up, we are a city that is forward-thinking.”

Mr. de Blasio said that his executive order would create momentum for the fight to increase the state’s minimum wage to $10.10 an hour, and to allow municipalities to raise their local pay rates even higher.

“Increasing the minimum wage nationally would be the best possible solution. We need to act everywhere we can,” said Mr. de Blasio. “And we’re going to work for that not just downstate but in the capital of our state, Albany, where the time is ripe for the change in the minimum wage.”

Mr. de Blasio told reporters he believed Gov. Andrew Cuomo–who has historically been cool to the entire notion of local minimum wage control–would hold true to a commitment made earlier this year to permit cities to raise their minimum wage by up to 30 percent.

“I’m going to take the governor at his word,” Mr. de Blasio said. 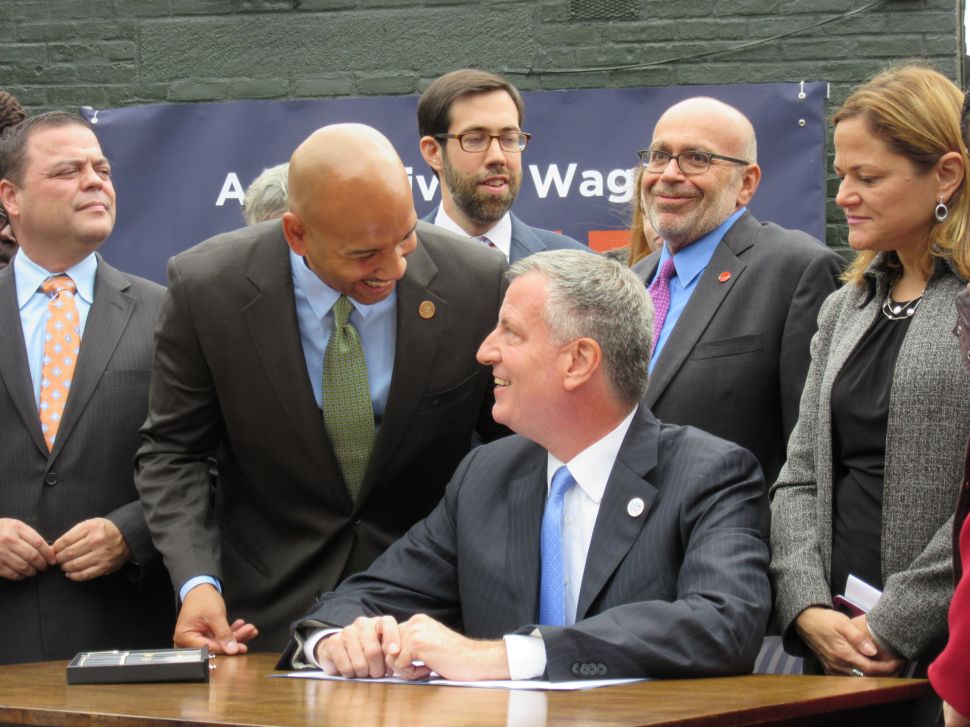