On the heels of a lengthy New York Times story detailing the stumbles of the Bloomberg administration’s Hurricane Sandy recovery efforts, Mayor Bill de Blasio said today his predecessor did not have a “good formula” for how to help people after the storm struck in 2012.

“I have respect for everyone in the previous administration. I am sure they were trying their best but the formula was not a good formula,” Mr. de Blasio told reporters at the Coney Island Houses, where he announced that $108 million in Federal Emergency Management Agency funds were being dispensed to the housing project to gird it against future storms.

“This team,” Mr. de Blasio continued, referring to key players in his own administration, “They knew they had to produce. One of the things they did, which I really want to give them credit for, is that they went out into each neighborhood, they sat with residents and they took all the complaints because they wanted to understand how to be most effective most quickly.”

Mr. de Blasio extolled himself for setting public rebuilding goals, including proclaiming that the city’s beleaguered Built It Back program would start the construction of 500 new homes by the end of summer.

“I want to remind you: when we set the goal of 500 and 500 months ago, at the beginning of the summer, a lot of people said that sounded like a very tall mountain to climb. It was. But because we publicly set the goals, they moved heaven and Earth. We’re going to be setting new goals soon because we want to do even better,” the mayor said.

The Times report faulted Mr. de Blasio’s administration for not prioritizing Sandy recovery when he immediately took office, but mostly took aim at Mr. Bloomberg for creating too much bureaucratic red tape for Sandy-ravaged homeowners, relying on expensive outside consultants and focusing excessively on long-term resiliency over the immediate needs of residents.

When Mr. de Blasio ran for mayor, he knocked Mr. Bloomberg for ignoring Sandy-ravaged outer borough neighborhoods. But a former deputy mayor in the Bloomberg administration, Howard Wolfson, defended the work of Mr. Bloomberg’s Rapid Repairs program–immediately fixing homes so people could live in them–in the aftermath of Sandy.

“We didn’t have trailers or ship people with damaged homes to other cities and states, which is what has occurred in many other locations of devastating natural disasters. Instead, the 20,000 homes touched by our immediate Rapid Repair program construction work allowed families affected by the storm to do what they so desperately wanted most – to return home,” Mr. Wolfson said in a statement today. “The de Blasio administration is continuing the difficult work of long-term rebuilding, and their announcement today represents important progress.” 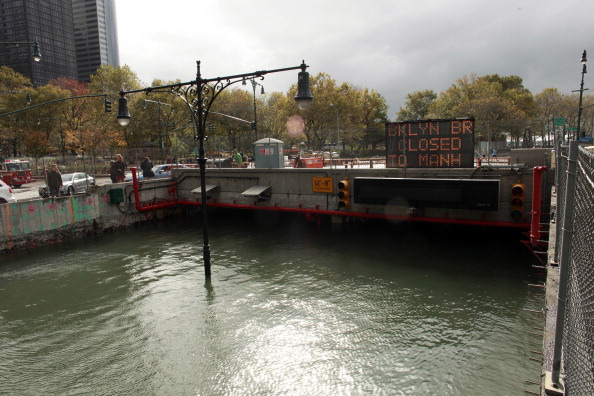