Police Commissioner Bill Bratton said yesterday it was “quite clear” the NYPD would need around 1,000 new police officers next year — but his boss Mayor Bill de Blasio will take some convincing..

“I think he was expressing an aspiration — that’s a very different thing than what we’re going to decide,” Mr. de Blasio told reporters in Brooklyn after voting in today’s primary election.

Mr. Bratton broke ranks with Mr. de Blasio’s previous position — and with his own — Monday at a City Council hearing when he said he expected to request “in excess” of 1,000 new police officers in the next city budget. That comes just months after the de Blasio administration turned down the City Council’s offer of 1,000 new cops this year.

“How many cops do we actually need, I can be very comfortable in saying to you we need more, that’s quite clear,” Mr. Bratton said yesterday.

But Mr. de Blasio was taking a wait-and-see approach today, saying Mr. Bratton — who told reporters he’d spent the last eight months analyzing what the size of the department should be and had determined it would need to be larger, especially given new training initiatives — had not made a formal request yet.

“We’re certainly going to have a full process aournd the city budget. You know, when he finishes his review, which is still in progress, we’ve talked about it for a long time — there will be a very formal proposal that coms out of the NYPD into our budget process,” Mr. de Blaiso said.

The mayor said he didn’t feel lonely in not embracing the idea of new officers — something both the Council and Mr. Bratton are now behind.

“My job is to figure out what’s in the best interest of the city and come up with a budget that reflects all of our needs and is fiscally prudent — again, not surprising to me when elected officials want a number of things. Not surprising any head of any city agency wants more resources or personnel,” Mr. de Blasio said. “These are kind of traditional realities. A mayor’s job is to make sense of all that and come up with a final proposal and submit it to the Council in the spring.”

The mayor said Mr. Bratton’s analysis was a “work in progress.”

“He’s offered ideas and thoughts, but the real process begins when he submits his formal evaluation and his formal proposal,” Mr. de Blasio told the Observer.

It’s a rare area where Mr. de Blasio and Mr. Bratton have disagreed publicly, but Mr. de Blasio fell back on a line Mr. Bratton has often used himself — police chiefs always want more police. Still, in the past, Mr. Bratton had followed that up by saying he could do without, a qualification that was absent in his remarks yesterday.

“This is such a common reality of a commissioner expressing their wish list, it never surprises me. But there’s been a constant dialogue with the commissioner about the fact that when we get to a formal proposal, then that will be entered into our budget process and then we will make formal decisions,” Mr. de Blasio said.

The mayor did strongly back Mr. Bratton on one of his positions from yesterday’s council hearing — that chokeholds, prohibited by the NYPD, do not need to be made illegal.

“The every day policing that happens in this city will not include chokeholds. That’s departmental policy, it has been for decades. We will enforce that policy. There will be consequences for anyone who violates that policy. The retraining is going to make that very very clear, and i think that’s sufficient,” Mr. de Blasio said.

He pointed out that in extraordinary circumstances, an officer may need to use the maneuver to save his own life.

“We have to be a little careful in terms of the legal front, where there are some very exceptional situations where the life of the officer could truly be in danger — and that’s where there has to be some flexibility,” Mr. de Blasio said.

The issue could put Mr. de Blasio at odds with the council, another frequent ally.

Councilman Rory Lancman indicated yesterday on Twitter that he intended to introduce legislation to make the practice illegal, and Council Speaker Melissa Mark-Viverito seemed open to the bill — saying she did not understand Mr. Bratton’s opposition. 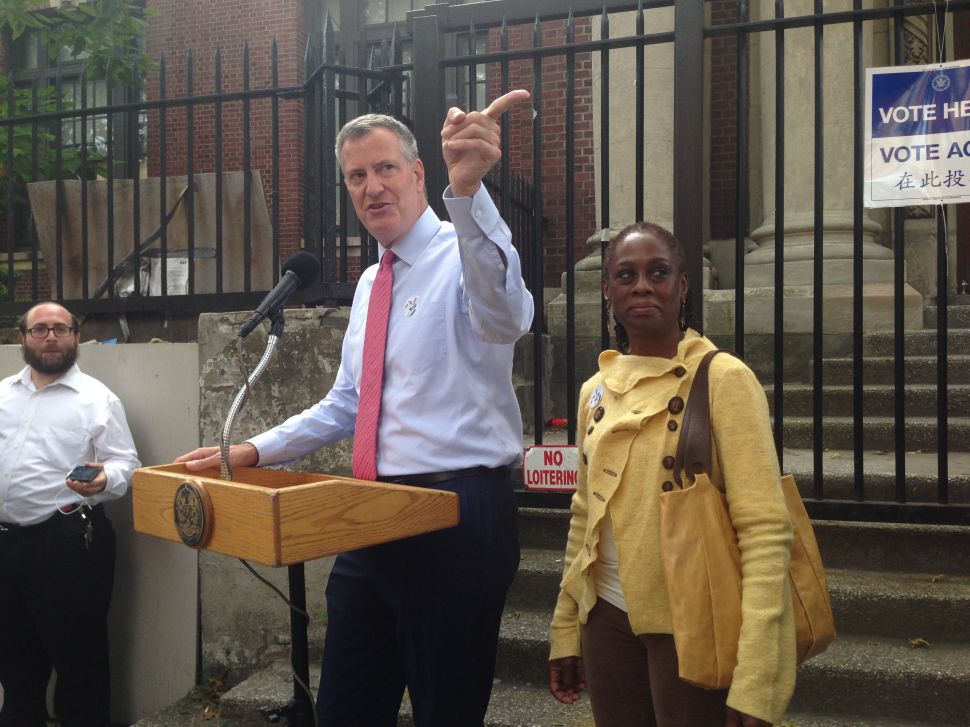