Assembly Speaker Sheldon Silver called a press conference this afternoon to denounce Zephyr Teachout’s “unacceptable” views on the Israel Gaza conflict, signaling that local Democrats are increasingly concerned that Ms. Teachout or her running mate could overachieve in the gubernatorial primary next week.

Mr. Silver insisted that Gov. Andrew Cuomo, who is running with former Congresswoman Kathy Hochul against Ms. Teachout and Tim Wu, a law professor, did not ask him to come to City Hall to address Ms. Teachout’s comments. But the hastily staged press conference had the trappings of a campaign event, with Democrats like Congresswoman Carolyn Maloney, Queens Borough President Melinda Katz and Councilman Mark Weprin taking turns attacking Ms. Teachout.

“Their failure to stand strong with Israel speaks volumes about their true feelings when it comes to protecting and defending the Jewish state,” Mr. Silver continued. “We as New Yorkers cannot accept this. We as New Yorkers have a strong and profound connection to Israel.”

Ms. Teachout, a first-time candidate and a serious long-shot to knock off Mr. Cuomo, declined to take a position on Israel’s ongoing conflict with Gaza until this week, when she told reporters that she would maintain New York’s “special relationship with Israel” if elected. Though a governor, unlike a president or member of Congress, has virtually no influence on foreign affairs, the state’s political class with near unanimity supports Israel in its armed conflicts. Mr. Cuomo recently traveled with Mr. Silver to Israel to underscore the point.

Mr. Weprin, a member of the City Council’s Jewish caucus, insisted it was “outrageous” and “offensive” that Ms. Teachout once argued that Israel’s fate was beyond the purview of a New York State governor.

“I know the professors running for governor, lieutenant governor, like to be snarky in some of their comments and be cute in a lot of their answers. But for someone who is running for governor of the State of New York to say that the state of Israel is not an issue for New York State and our governor is outrageous and offensive to me,” Mr. Weprin said, explaining that New York is a crucial economic partner with Israel.

Israel this summer traded rocket fire with Gaza, a Palestinian territory dominated by the political group Hamas, which the United States and other countries deem a terrorist organization. More than 2,000 Palestinian civilians died, leading to some international condemnation of Israel, but Mr. Silver and other Democrats claimed again today the blame lay totally with Hamas.

What was also made clear is that establishment Democrats are taking Ms. Teachout and Ms. Wu seriously. Though Mr. Silver said Mr. Cuomo’s campaign is “anything but desperate,” pointing to the governor’s strong poll numbers, his running mate Ms. Hochul– the candidate for lieutenant governor–is on a separate ballot opposing Mr. Wu.

A relative unknown outside of her Buffalo base, Ms. Hochul’s victory is not assured against Mr. Wu, a celebrity in the tech and collegiate worlds. Just yesterday, Mayor Bill de Blasio offered a ringing endorsement of Ms. Hochul as a way to introduce her to downstate voters.

Ms. Teachout’s campaign did not immediately return a request for comment. 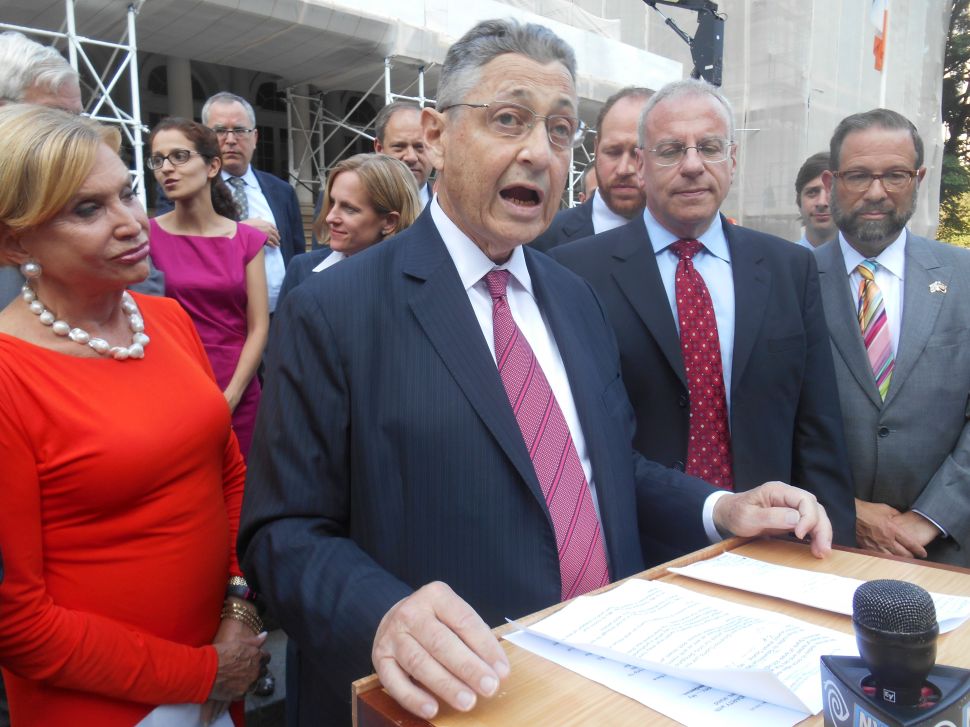