TRENTON – The Assembly this afternoon could not summon the necessary votes to override Gov. Chris Christie’s veto of A961, as Assembly Minority Leader Jon Bramnick (R-21) prevented Democrats – some of them outraged – from peeling away an adequate number of his caucus members.

The bill received 45 votes in the affirmative, five in the negative, and 23 abstentions.

In a floor debate prior to the vote, Bramnick labored to offset the embarrassment of Republicans, whose caucus members would have to overturn an earlier vote on the issue to please Christie.

An original staunch backer of the bill, Assemblyman Declan O’Scanlon (R-13) backed up the leader on a change of course after the treasury department notified Republicans that it would be inappropriate for the state, the issuer of the debt, to also issue an affordability analysis.

“I strongly urge that we pull this back,” O’Scanlon argued, citing new information. “If there is another we to work this, then that’s the way we ought to go.”

“We deal with issues all the time,” he said. “When there are issues of controversy. The easy ones pass 80-0. The ones in the weeds [prompt] comments from both sides of the aisle.”

That didn’t happen in this case.

“I think it’s outlandish,” he said.

The bill requires the state to include a State debt affordability analysis in the annual State Debt Report that is submitted to the Commission on Capital Budgeting and Planning to provide a “clear, data-driven framework for the Executive and the Legislature to evaluate and establish priorities for legislation that may impact the amount of State debt during future fiscal years,” according to the Assembly Majority Office.

The state faces $40 billion in debt – and more to come.

Democrats pushed to get this debt report bill done now.

“Regardless of your political leanings, we came together to put partnership above partisanship,” Assemblyman Troy Singleton (D-7) (pictured) said of the original 77-0 vote on A961, which he co-sponsored.

Singleton then moved to override the governor’s veto.

But Bramnick spoke out against it.

“Would the prime sponsor yield for some questions?” he asked Singleton, who answered in the affirmative.

Bramnick said he wants more time to get information.

“Once you find out what the facts are and this type of issuance of a report,” lawmakers will agree on a delay, the Republican leader insisted. “We run the risk of running afoul of the SEC.”

Bramnick noted that the votes are not there, why not delay to get a better bill?

“There was no mention of bond covenance at all in the governor’s statement,” Singleton said. “What concerns me is not only is what we are trying to do consistent with corporate America, but eleven other states.”

The one public document made no mention of the point Bramnick made.

But “I think we missed something,” the Republican said. “I’m sinply asking for some time that reflects all the information. EVen Democrats… would agree with me. I’m not defending the administration. Let’s give it some review.”

Co-sponsor of the bill, Assemblyman Jay Webber (R-26) rose next.

He supports the bill.

“You give me an up or down vote toay, Mr. Speaker, I will vote,” said Webber.

But he prefers a more informed vote.

“And everyone would benefit from that,” he said. “Isn’t it crazy to vote on the TTF without knowing whether we can afford it?”

Webber was clear in his support for the bill. But challenged Speaker Vincent Prieto (D-32).

“I am standing with you and against my governor and against my party,” said the 26th District Republican lawmaker. “Will you stand up to the forces in your party [on spending issues] to make changes?”

Singleton said he had been in the building since this morning and had heard nothing from the treasurer’s office.

Bramnick apologized that “the information was not brought to the assembly before.”

“It would have helped to know where treasury stood on this prior to voting on it,” said Assemblyman Michael Patrick Carroll (R-25), who fretted about the appearance of Republican indecision. 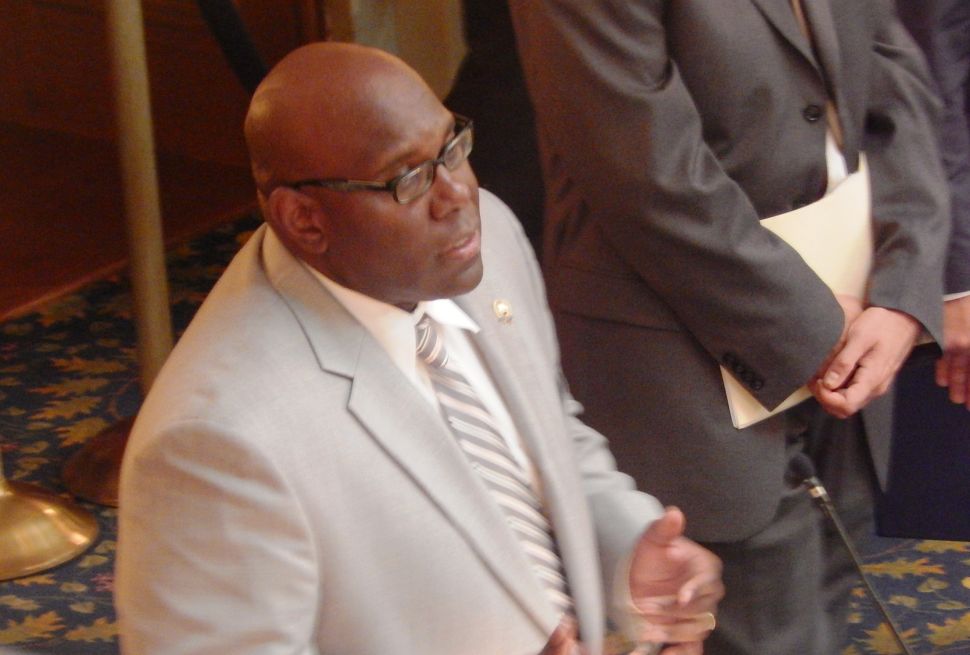