Doctor Who you gonna call?

Clara’s been living a double life—having fabulous adventures with the Doctor, then coming home to continue her blossoming romance with new boyfriend and fellow teacher Danny Pink. But she’s been keeping them in the dark about one another, and something’s gotta give.

Of course, when the entire plot of an episode is based on keeping the characters unaware of each other, you run the risk of dipping into sitcom territory—and here we definitely get some of that: dumb, flustered excuses, comic misunderstandings, a bit of slapsticky running around, etc.

On the other hand, this sitcom-plot reaps the benefits of a real doozy of a sci-fi premise: what if, one day, your sort-of-boyfriend was suddenly transformed into your sort-of-dad? What happens when you fall in love with someone new?

Between this clever twist, some truly excellent writing and stellar performances from all three leads, and a rather unnerving theme of racial and class conflict that runs beneath the whole thing, what could have been extremely silly—and is, in places—coheres into a clever and moving character-driven episode.

The plot, such as it is, revolves around a war machine called a Skovox Blitzer, an unstoppable (if totally goofy-looking) soldier robot with enough firepower to destroy the planet, finds itself stranded in East London, right near the Coal Hill School where Clara and Danny teach.

The Doctor wants to lure the robot to the school, where he can trap it in a temporal vortex that sends it a billion years in the future. But knowing that Clara would, sensibly, object to any plan that involves bringing a killer robot into a school full of children, he keeps it a secret from her. He goes undercover as the school’s groundskeeper/handyman and places the devices that control the temporal vortex in strategic places all over the grounds, while Clara and Danny both separately run around wondering what he is up to.

The Doctor eventually lets Clara in on the plan. But still in the dark is Danny, whom the Doctor consistently mistakes for a PE teacher, ostensibly owing to the fact that he is an ex-soldier and soldiers always become gym teachers, not math teachers. (He also decides that Clara’s boyfriend must be the bowtie-wearing, floppy-haired, slightly Eleven-resembling English teacher, rather than him.) So the suspicious Danny goes and finds the vortex devices and removes two of them, just in time to ruin the plan.

So when the Doctor, using a watch that renders him invisible, entices the Skovox Blitzer into the school auditorium, the vortex doesn’t work. Danny comes in to confront the Doctor about leaving weird machines all over the place, which activates the devices—but not in the right places, so it only sends the robot a few days into the future, not a few billion.

Now Clara’s got some ’splaining to do, which she stumbles through, eventually admitting that the Doctor is an alien, that they travel together, and that she’s been hiding it from Danny. He feels betrayed and lied to—fearing that he doesn’t really know her. So she steals the invisibility watch for him so he can spy on Clara and the Doctor together, to see that she’s not a different person in her two different worlds.

The Doctor sees through the ruse, literally, and Danny responds with some startlingly insightful barbs about how the Doctor may hate soldiers, but he sure acts like a commanding officer all the time. Particularly given the way he ordered Clara around in “Listen,” this hits home.

The Skovox makes its return during the middle of Coal Hill’s parents evening. The Doctor uses Clara as bait while he prepares his new plan: a device that will make the robot think he is its (you guessed it) commanding officer. But it doesn’t quite work, and so Danny, using the invisibility watch to get right behind the robot, does a totally ludicrous flip over its head, giving the Doctor enough time to figure out how to order the thing to shut itself down.

So the Doctor gains a small, grudging amount of respect for Danny, who has begun to prove that he is good enough for the Doctor’s almost-daughter. Later, Danny makes Clara promise that she’ll always let him in, always tell him the truth, from now on, and then tacks on a kind of gross, “so I can be there to protect you.”

The Doctor’s soldier-aversion, once a sort of dumb character note, has begun to pay off in small ways like this. Yes, there is something flawed and dangerous about military culture, which leads to this sort of masculinist posturing. Danny’s first reaction on hearing about the Skovox is “Let’s call the army!” which the Doctor points out would lead inexorably to the destruction of the whole planet. (And note that both of his plans for its eradication were nonviolent.)

At the same time, the show lets us see that Danny is not wrong. Not only does his military training allow him to save Clara when she did, in fact, need saving, but he also gets right at the real flaw in the Doctor’s logic. He explicitly notes that, in a sense, nonviolence is a luxury. As we saw in “A Good Man Goes to War,” the Doctor doesn’t have to pick up a gun himself only because he has others who will do it for him. Saying “I’m above it all, so I hate soldiers,” is a classist hypocrisy when you depend on those who have no choice to do the fighting.

But what “The Caretaker” really deserves kudos for is its willingness to expose the racial elements of its imbalances. Danny is a person of color, and so the whole “hiding him from daddy” plotline, followed inevitably by the “now he has to prove himself worthy” theme, has an unavoidable Guess Who’s Coming to Dinner feel to it all.

Much as I loved the Russell T. Davies years of Doctor Who, I was always slightly uncomfortable with the way the show dealt with Rose and Mickey’s relationship, in which the white man swooped in and stole the girl’s attentions from her black boyfriend. (And this was compounded when Mickey ended up being paired up with black companion Martha Jones.) But the love-triangle-with-an-alien aspect of that sequence consistently served to justify and obscure such concerns. Here, on the other hand, with the Doctor firmly in a parental role, Who seems finally to be taking an unflinching (or at least less-flinching) look at such complex problems—a promising, and refreshing, development. 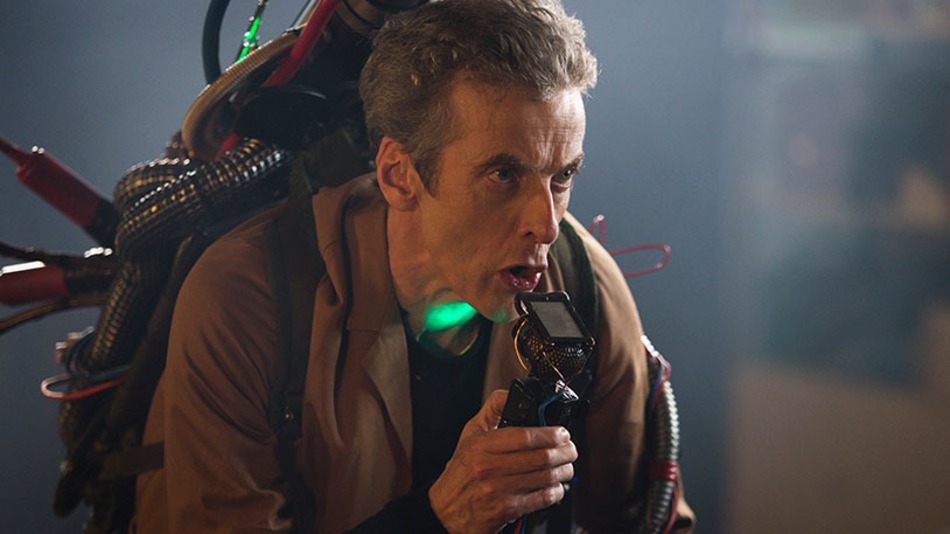