What is a TARDIS, really? I mean, sure, it’s a time machine, but isn’t it also a story-generating machine? A narrative device that gives birth to infinite narratives. It’s Alice’s looking glass; it’s the Pevensies’ wardrobe. Get in your ship and jet off to yet another short story, yet another terrifying/fanciful/mind-boggling adventure. And of course, like a TARDIS, a book is another one of those things—just open the cover—that is bigger on the inside than the out. (A metaphor that gives birth to infinite metaphors.)

With “Robot of Sherwood,” Doctor Who begins to graze the surface of one of its key riddles: Where do all of these stories come from? Are they just out there waiting for the Doctor (and us) to discover them? Or is it more than that?

After all, no matter where the Doctor intends to travel, or what he intends to do/see when he gets there, he finds worlds in peril wherever he goes, threats he must defuse. With all of time and space to choose from, the TARDIS unerringly puts him down in the middle of otherworldly crisis after otherworldly crisis.

And thus more than one character has seen fit to comment that wherever the Doctor goes, tragedy follows. But most often it is the other way around. Sometimes his bumbling does lead to bad things happening, but usually the TARDIS lands where there is a mystery already in progress.

So: which came first, the story or the Doctor?

Well, why don’t we retell an old story and find out? It is Clara’s turn to choose where they go next—anywhere in time and space. And she wants to meet Robin Hood. Just one problem—he doesn’t exist. Just a legend, no basis in reality.

So, with the rather quixotic goal of disproving the existence of Robin Hood by steering the TARDIS to a time and place where he might have been expected to be— and presumably then idiotically saying, “See? No Robin Hood hanging out on this particular corner. Guess he never existed!”—he sets a course for Sherwood Forest in 1190. And who should be standing right there, waiting to shoot an arrow into the “magic box,” but Robin Hood, in his traditional Lincoln green and laughing his ridiculous laugh.

A coincidence that would make anyone suspicious, even if they believed in the existence of a historical Robin Hood, which the Doctor most certainly does not. After a slapsticky fight that sees the Doctor besting the sword-wielding outlaw with nothing but a serving spoon, they are off to meet the Merry Men. The Doctor all the while tries to figure out what sort of alien trickery they are up against making it seem like these fictional characters actually exist. But no matter how many strands of their hair he analyzes, they appear totally legit.

The next day is the legendary “best archer in the land” contest thrown by the Sheriff of Nottingham as a trap for Robin Hood. A disguised Robin is about to win when the Doctor intervenes, shooting his arrows (using, we later learn, some secret technological gimmickry) right through Robin’s, and finally blowing up the target with his sonic screwdriver. Instead of the offered prize, a golden arrow, the Doctor instead asks for some answers. Which he gets, in a way, as the sheriff orders his knights to kill everyone and take the sonic screwdriver, and they reveal themselves to be robots.

The Doctor is feeling pretty good about himself right now, because obviously the presence of robots means that Robin Hood doesn’t actually exist and that this is all some sort of play being put on for their benefit. Of course it doesn’t mean that at all, but who’s asking for logic at this point?

After the Doctor and Robin have a dick-measuring contest while chained up in the dungeons and Clara tries out her old interrogation-seduction routine on the sheriff, they discover the basic story: The castle is actually a spaceship from the 29th century that crash landed here and has been using the sheriff and his clever Cash4Gold (except no cash, and actually they just kill you) scheme to make enough gold circuitry to repair the ship and send it to its destination. (The mythical Promised Land, the same destination as the similarly disabled and disguised ship in Victorian London in the season premiere.)

The Doctor now theorizes that the ship not only created robot knights to terrorize the people into giving up their gold, but it also—using information about English folklore from its databases—created a robot Robin Hood and robot Merry Men to give them hope and pacify them.

During their final confrontation, the sheriff points out that this is a stupid theory—the ship and the sheriff have enough power to just take the gold they need, so why create an antagonist at all? The Doctor suddenly realizes he’s been wrong all along. And Robin Hood beats the sheriff in a swordfight and knocks him into the cauldron of boiling gold.

After saving England from being blown up by the spaceship, by firing the golden arrow to send it into orbit (don’t ask, because I truly have no idea), the Doctor faces Robin Hood one last time, finally able to admit that he must be real.

The two of them are the same, Robin says: both born into wealth and privilege, both giving up their comfortable lives to help the less fortunate. And both are legends whose real lives will always be swallowed up by the stories about them. If in the future I am to be just a legend, my real history forgotten, Robin says, I prefer it that way: “History is a burden. Stories can make us fly.”

The Doctor is always flying. He is the hero loose in time. Unmoored from history, freed from its burden, he is made up of stories. He always has been.

Just before the TARDIS disappears, Robin has a parting shot: “And remember Doctor—I’m just as real as you are.”

Which, of course, is indisputably true. 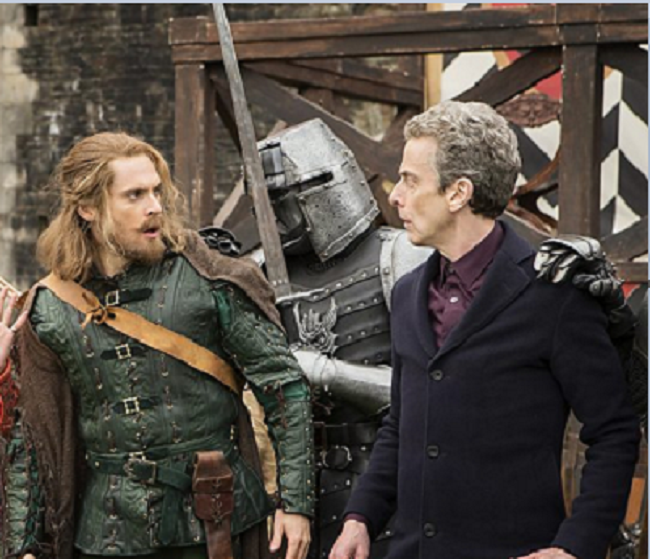