The Doctor next to a glowing circle….thing. (BBC)

After “Listen,” last week’s (rather divisive) coup of an episode, this installment, “Time Heist,” is something of a letdown. It has a fun premise and some great moments, but it is curiously airless for what is essentially a caper, an episode about a bank robbery.

Clara is getting ready for her second date with Danny Pink when the Doctor shows up, restless and wanting to have some fun. (The running gag that the Doctor doesn’t notice that Clara is attractive—meant, I think, to emphasize how much more “alien” this incarnation is—is becoming increasingly wearing and played-out.) Suddenly the phone in the Tardis rings—a rare occurrence. Clara begs the Doctor not to answer it, but he does—

And suddenly the two of them are sitting in a dim room with two strangers, all of them holding really gross-looking caterpillar things. They’re “memory worms,” used to erase memories, which explains the time shift: all of their memories between the time of the phone call and now have been deleted. A recording plays, in which each of them states that he or she submitted to this memory wipe of their own free will. The other two are identified as “Psi, augmented human,” and “Saibra, mutant human.”

Then a second recording: a man who calls himself “the Architect” explains that the four of them are going to rob the Bank of Karabraxos, the most impregnable (least pregnable?) bank in the universe. And so they do so, mostly because their recorded voices indicated that they have already agreed to it.

They are the space version of Ocean’s Eleven: Psi, a hacker with a computer for a brain, can carry around the bank’s schematics in his head and unlock the digital locks on the vault. Saibra, whose mutation lets her assume the form (and the DNA) of anyone she touches, can impersonate a bank client and get them into the bank. The Doctor is the brains of the operation (hint hint!)—though both Saibra and Psi continually wonder why he is in charge. (“Mostly it’s the eyebrows,” he says, with a tiny assenting nod from Clara.) And Clara—well, it isn’t apparent at all what Clara is doing here. Not being on a date with Danny Pink, I guess? Unlike in the last few episodes, where she was more leader than Companion, here she just sort of along for the ride.

The Architect has somehow come there before them and placed things they need along the way. Clearly there is a plan, but they are only given access to it a little bit at a time, when they need to know the next step. They soon find out why: the bank is so secure not simply because it has DNA scanners in every room and its vault is atomically sealed. It employs an alien it calls “the Teller,” a monstrous, minotaur-like telepathic creature that can detect guilt. As soon as a guilty person enters the bank, it lets out a bellow to alert the administrators, who then let it feed on the guilty person’s brain, reducing the criminal to a kind of living death with a collapsed skull.

The memory wipe allowed them to enter the bank undetected by the Teller, because they didn’t know the plan. Unfortunately, as more of the plan becomes clear to them, the Teller starts to come after them.

They break into the private vault of Madame Karabraxos, who happens to live inside it. She calls for the Teller to come kill them, but not before the Doctor finally puzzles out who the Architect is (about 30 minutes after the rest of us did). He hates the Architect so much, so the Architect must obviously be he himself. In a flash of inspiration, he realizes that the original phone call must have come from Madame Karabraxos, so he gives her his phone number. But then some narratively convenient solar flares are about to engulf the whole bank, so she escapes, leaving them there, with the Teller, to burn.

The Doctor gets his memories back and learns the truth. They were never there to steal anything in the first place, but to rescue the Teller and his mate, who is being held captive in the same vault to leverage his service—the very last of their species. The phone call was from a very old Madame Karabraxos, years hence, whose greatest regret was that she brought about their extinction. So the Doctor agreed to break into the bank to save them, setting the whole caper in motion. Yay, happy ending.

None of this really makes logical sense. I can think, offhand, of about ten less complex ways that they might have used the Tardis to save the Teller species. Not to mention the impossible paradox that the whole plan is based on—they had to break in to give Madame Karabraxos the phone number that she called to inspire the break in in the first place. But we should know by now trying to parse such things out in Doctor Who is a fool’s errand.

And such narrative muddling doesn’t explain why “Time Heist” feels so flat. For a genre that is supposed to be full of suspense, this robbery-caper episode gave us little tension or excitement.

Mostly because it was such well-trodden territory, seemingly made out of recycled bits of other episodes. Clara trying to keep her mind a blank recalls her trying to focus on her timeline in the previous episode, her trying not to breathe in the season opener, and several other similar scenes. (Not to mention the echo between “Don’t think!” and “Don’t blink!”) The memory wipe just seems like a version of the Silence, and the scene of the Teller feeding on the Doctor’s memories is just an unnecessary rehash of last season’s worst episode, “The Rings of Akhaten” (or as I like to call it, “space bat mitzvah”).

But primarily, of course, it all turned on the idea that nobody hates the Doctor more than the Doctor. This is a well-established fact—it was the whole premise of “Amy’s Choice.” When the Doctor, for no real reason, admits that he hates the Architect, every viewer just groaned and said, “Ok, so clearly he’s the Architect.” And any suspense the episode might have generated with its fun mind-wipe premise was instantly deflated.

I would be remiss, however, if I didn’t mention a truly satisfying little bit of fan service that appears when the Doctor finally, belatedly, figures it all out. Calling for silence while he thinks it all through (nobody is saying anything, of course), he runs through “shut up” and “shut up shut up shut up just shut up,” before exploding into “shuttity up up up”—clearly a little shout-out to everyone’s favorite Malcolm Tucker sign-off: “OK, fuckity bye!” 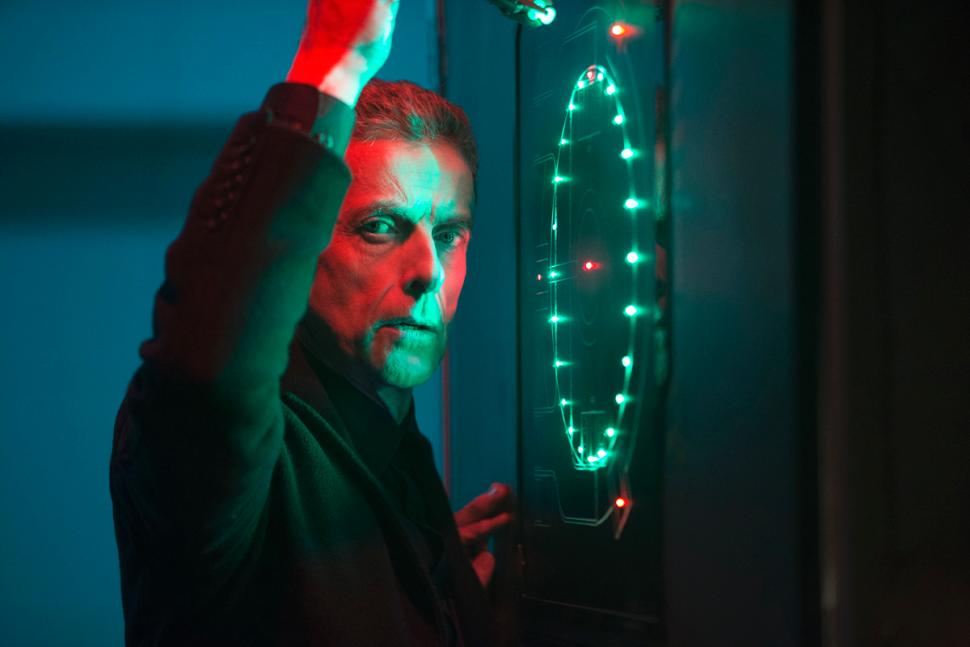