He may not be Henry Kissinger, but Domenic Recchia Jr. thinks he knows more than enough about the world beyond New York.

The former Brooklyn councilman, under fire from Congressman Michael Grimm for not knowing enough about Middle Eastern policy, asserted today he has “great knowledge” of foreign affairs, citing experience he garnered running a school exchange program more than a decade ago and trips he’s taken to Italy.

“I have great knowledge of foreign affairs. What [Mr. Grimm] doesn’t know is that when I was on the local school board, I ran a student exchange program with Japan for the students of his district that he represents,” Mr. Recchia told reporters at an endorsement event today with Senator Charles Schumer. “I’ve been to Israel, I’ve been to Italy. I’ve been to many, many countries across the world.”

Mr. Recchia, a Democrat, could not explain yesterday what the Trans-Pacific Partnership–a proposed free-trade agreement between the United States, Australia and several South American and Asian nations–actually was and struggled to articulate why he thought Mr. Grimm had a relatively low rating from the American Federation of Labor.

Mr. Grimm, a Republican facing a 20-count indictment, mocked Mr. Recchia’s thinly-sketched positions. “This is just the latest example of my opponent’s glaring ignorance on key issues and a voting record that is completely out-of-touch with Staten Islanders and Brooklynites,” the congressman charged, alluding Mr. Recchia’s service as finance chair in the City Council. “I guess Congress’ vote giving the President Title X authority to train and equip the Free Syrian Army on Wednesday is outside the realm of finance which he claims to be his only qualification.”

Today, standing with Mr. Schumer and State Senator Diane Savino outside Arthur Von Briesen Park on the North Shore, Mr. Recchia was grilled about a vote taken in Congress to authorize aid to Syrian rebels combating the Islamic State in Iraq and Syria. With Mr. Schumer’s help–and with far less nuance than the senior United States senator–Mr. Recchia said he would have voted with much of the House to authorize the aid.

“We have to make sure that we address this issue of ISIS now. Now is the time that we have to address this terrorist issue across the country and stop them now,” Mr. Recchia said. “We can’t wait any longer.”

Mr. Recchia declined to answer a question from the Observer about whether, if President Barack Obama asked for the deployment of combat troops to battle ISIS, he would agree to troops on the ground. “I don’t handle hypotheticals, alright. I don’t have enough information but one thing I do know is that we have to protect our nation, we have to protect the people of this country.”

Similarly, Mr. Recchia could not explain what committees he would want to serve on if he is elected to Congress and why. Mr. Schumer swooped in to say he would offer his advice.

“I will say this. When Domenic is elected, not if, we will sit down together as Mayor Koch and Governor Carey did when I first got elected to Congress and figure out, given the configuration, what are the best committees to serve to serve his district,” Mr. Schumer told the Observer. “I promise you this: I will use my clout to get him on those committees.” 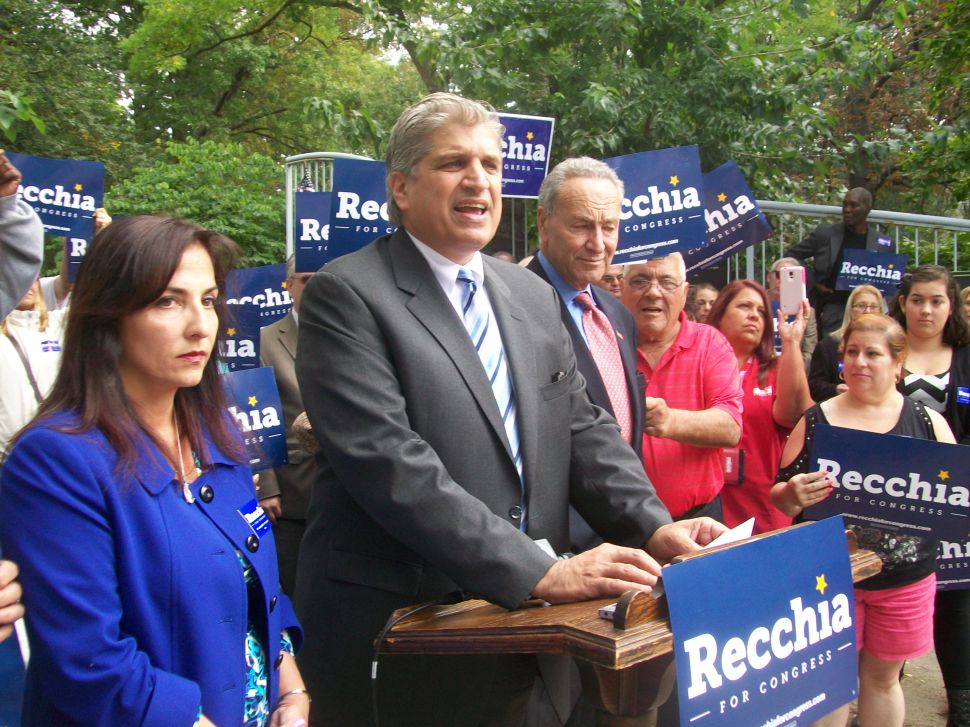