The surprise resignation of Eric Holder, the first Attorney General ever to be held in contempt of Congress, exploded in the news today. Holder has been under unrelenting assault for the most egregious politicization and abuse of power in the Department of Justice in history—exceeding that of John Mitchell and Alberto Gonzalez. He has made the Department of Obstructing Justice notorious. Federal judges are stepping in to end his stone walling of Congressional and other investigations on several fronts, and now he’s on the run.

Why now? What is about to blow up?

This week in Washington federal district judge John D. Bates denied the Department’s motion for further delay and ordered DOJ to produce an index identifying each of the documents it had withheld in the lawsuit by Judicial Watch to obtain the Fast and Furious documents; identifying the statutory exemption claimed; and explaining how disclosure would damage the interests protected by the claimed exemption. The deadline looms just four weeks away on October 22nd.

Reality being far different from the President’s remarkable praise of his dear friend at today’s photo-friendly press conference, Mr. Holder lost all credibility with Congress upon his abominable handling of the Fast and Furious gun-running scheme with Mexican drug dealers, which caused untold numbers of deaths. He refused to produce documents demanded by federal legislators—prompting historic contempt charges.

At the same time, Mr. Holder is about to run out of stalling time on the cover-up in the IRS scandal. He has come under increasingly serious fire for refusing to appoint a real special prosecutor to investigate what the Inspector General of the Treasury has already determined to be improper targeting of conservative groups by IRS officials including Lois Lerner. That bomb could detonate any day now.

The IRS has stonewalled production of the relevant documents, suffered astonishing computer crashes, deliberately destroyed Lois Lerner’s Blackberry with no effort to retrieve the “missing” emails from it, and been deceitful and obstructionist in the lawsuit brought by Judicial Watch to obtain documents that would reveal the target selection process and how high up in the White House the knowledge or direction of it can be traced.

Judicial Watch recently requested additional discovery. Judge Emmet Sullivan, the federal judge in the District of Columbia, has just given the IRS until October 17 to file its response to that motion. Judge Sullivan has the power to appoint—and has previously—appointed a special prosecutor to investigate the Department of Justice for its corrupt prosecution of former Alaska Senator Ted Stevens, discussed at length in my new book Licensed to Lie: Exposing Corruption in the Department of Justice. Mr. Holder pledged to clean up the Department of Justice in response to that debacle. Obviously, he has not. The Project on Government Oversight disclosed that he has been protecting prosecutors who committed intentional and reckless legal and ethical violations. Unlike most of his predecessors, he refused even to release the names of the offenders in the Department.

Mr. Holder tasked Barbara Bosserman, a Civil Rights Division attorney, with the Department’s own purported investigation of the IRS abuses. Congress later learned that she had made substantial contributions to the President’s campaign and renewed its demand for Mr. Holder to name a special prosecutor.

As more of the IRS emails have come to light, they have revealed that Mr. Holder allowed a Justice Department lawyer, Andrew Strelka, to represent the IRS in opposing the lawsuit by Z Street—a group allegedly targeted for abusive treatment by the IRS because of its support for Israel. Mr. Strelka used to work with Lois Lerner, engaged in the political targeting himself, and maintained his close relationship with Ms. Lerner after he joined the Justice Department. Congressmen Issa’s and Jordan’s letter of August 25 to the Attorney General revealed that Mr. Strelka was privy to internal communications of the Exempt Office of the IRS long after he left that office. He was even advised immediately of the crash of Ms. Lerner’s hard drive—unlike Congress or any federal judge.

The letter notes: “Curiously, before his withdrawal from the case [forced by a story reporting this conflict], Strelka also completed a detail to the White House Counsel’s Office from December 2013 to June 2014—during which time the White House learned of Lois Lerner’s destroyed emails.”

The Congressional Committee on Government Oversight and Reform has intensified its inquiry into the Department’s conduct. The Congressmen told the Attorney General that their Committee staff should be contacted to arrange transcribed interviews of Mr. Strelka and Ms. Siegel by September 8. Mr. Strelka quickly and quietly left the Department. By September 5, the Department was stonewalling and refusing to assist the Committee in locating Mr. Strelka—who seems to be as missing as the IRS emails. As the Hill has reported, Rep. Jordan complains that the Justice Department “has declined to give Strelka’s contact information to the Oversight Committee and has reprimanded the panel for trying to get in touch with him directly.” Is this an out-take from House of Cards?

Congress also wants to talk to Nicole Siegel, a Department lawyer in the Office of Legislative Affairs. Turns out she also worked for Lois Lerner, shared Ms. Lerner’s views, and kept in touch. Hardly the disinterested person one should have in the Department office that responds to congressional inquiries on the IRS’s target selection.

Then there was the extraordinary accidental or mistaken call to Congressman Issa’s office by the Justice Department’s Office of Public Affairs. The call was intended for Rep. Elijah Cummings, the ranking minority member of the Oversight Committee, and sought to coordinate a leak of selected Committee documents to selected reporters so the Department could comment on them. The subject of the conversation and documents? None other than Andrew Strelka—regarding his representation of IRS Commissioner Koskinen in the Z-Street case. Meanwhile, other emails reveal extensive communications between Rep. Cummings’ staff and the IRS — referred to as an “executive branch agency” — in 2012 and 2013 regarding conservative group True the Vote.

As of September 12, the Department was still obstructing efforts to locate Mr. Strelka. Meanwhile, the Department’s own Inspector General Michael Horowitz testified before the House Judiciary Committee that the FBI and other components of the Department of Justice “have refused our requests for various types of documents. As a result, a number of our reviews have been significantly impeded.” Mr. Horwitz had already joined an unprecedented letter signed by 47 Inspector Generals for various agencies expressing serious concern that their jobs were being undermined and obstructed by multiple agencies of this presidency, including the Department of Justice.

Mr. Strelka can’t hide forever. Judge Bates is fed up with Department’s delays and ordered the list of documents Mr. Holder and Mr. Obama have been hiding for years now on their Fast and Furious scheme. Soon, Judge Sullivan could appoint a special prosecutor or demand production of the back-up server’s emails, or give Judicial Watch additional discovery after October 17.

One thing is for certain. Mr. Holder didn’t just wake up today and decide he wanted to go fishing. There are truths underlying this resignation that will be shocking when they surface. Mr. Holder will no longer have the shield of the Attorney General and the Department of Justice to protect him from congressional, grand jury, or other subpoenas. The next question is: Which criminal lawyer will he hire to defend him and how soon?

The hiding places are filling up faster than you can say “you’re running out of time.” 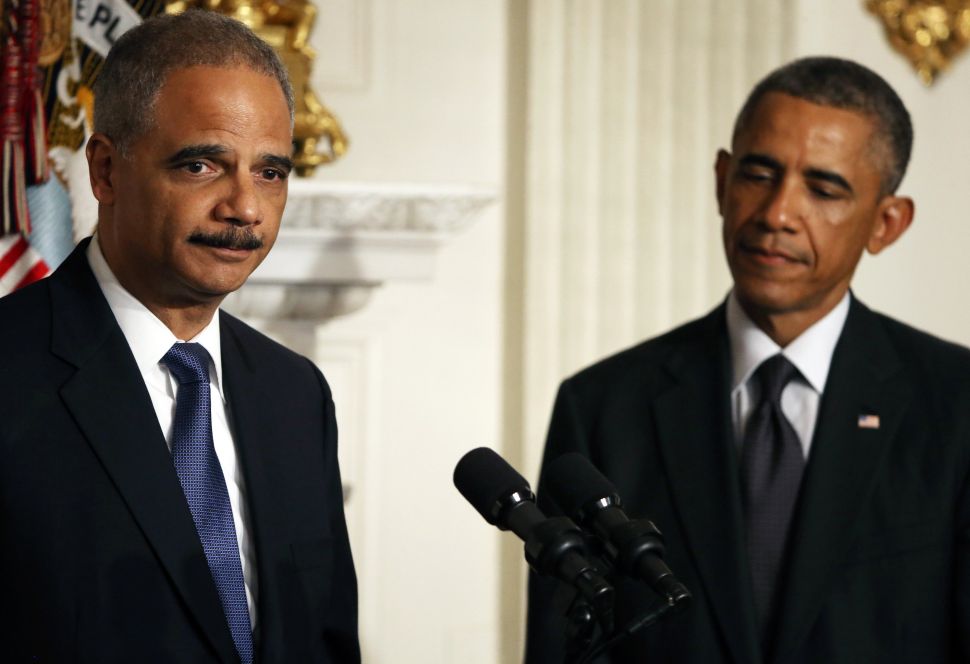