With a coalition of Democratic elected officials and labor leaders standing beside him, Attorney General Eric Schneiderman launched his re-election bid with a rally near City Hall, touting his record and vowing to fight for social justice.

“There have always been forces seeking to push back at equal justice under law, and there have always been New Yorkers willing to step up to that challenge, to push forward, to push toward justice,” Mr. Schneiderman told the crowd. “Over the least three-and-a-half years, I’m proud of the fact that my office has been a force for the pursuit of equal justice under law.”

As he kicked off his campaign against Republican opponent John Cahill, Mr. Schneiderman was joined by a cadre of city officials — many of whom were recently courted by Gov. Andrew Cuomo to back his candidate for lieutenant governor, former Congresswoman Kathy Hochul, to boost her credentials with progressives — who spoke of work they’d done with the AG in the past.

“He’s fought for the rights of working New Yorkers. Most recently I stood with him as he announced a major settlement for car wash workers whose wages had been stolen and robbed,” Ms. Mark-Viverito said. “You wanna talk about average New Yorkers, immigrant New Yorkers, these are individuals that were being exploited and whose salaries and wages were being robbed, and he was able to come with a settlement that really made that whole.”

And Comptroller Scott Stringer cited Mr. Schneiderman’s work going after big banks and pushing for a tougher nationwide settlement with big banks involved in the housing crisis and for funneling settlement cash to homeowners.

“Thanks to Eric Schniederman, thousands of families in Queens, the Bronx, Brooklyn and Staten Island, all over this state have been able to keep their homes — that’s what an attorney general does,” Mr. Stringer said.

New York State AFL-CIO President Mario Cilento said the coalition of unions would put its full might behind Mr. Schneiderman, saying workers had “no greater champion.”

“We will be there with phone banks and leafletting and mailings and we will be knocking on doors, tens of thousands of doors from Buffalo to Long Island and everywhere in between — because Eric has been there for us and now we have to be there for Eric,” he said.

Instead of being introduced by one of the many elected officials at the event, Mr. Schneiderman was introduced by Shantel Walker, a Papa John’s shift manager who earns $8.50 an hour.

“Some people don’t care about fast food workers — but Eric Schneiderman has fought hard for people like me,” she said.

Mr. Schneiderman — who would not take questions from reporters after the event — also touted his record pushing for statewide monitoring of opiate prescriptions, fighting for abortion rights, and cracking down on political corruption, an area where his GOP opponent, Mr. Cahill, has sought to knock Mr. Schneiderman over Gov. Andrew Cuomo’s shuttering of the Moreland Commission. Mr. Schneiderman didn’t mention his opponent’s name today.

“We’ve stood up to corruption all over the state of New York, in cities and towns and counties and we have gone after more than 50 public officials and their cronies for stealing taxpayer dollars and abusing the public trust,” Mr. Schneiderman said. “We are sending a clear message that no one is above the law and everyone is held accountable.”

Mr. Cuomo, with whom Mr. Schneiderman has often had a rocky relationship, was not among the officials at the rally — though he did hold an event about a mile away just two hours later to announce the re-opening of an R train tunnel to Brooklyn.

Mr. Cuomo is also up for re-election this November. He barely campaigned during his primary race against Zephyr Teachout, who garnered about 35 percent of the vote, and has yet to have the type of general election kick-off event Mr. Schneiderman had today. But the governor said he is working for the votes of New Yorkers, and would debate his Republican opponent, Westchester County Executive Rob Astorino, something he did not do in the primary. 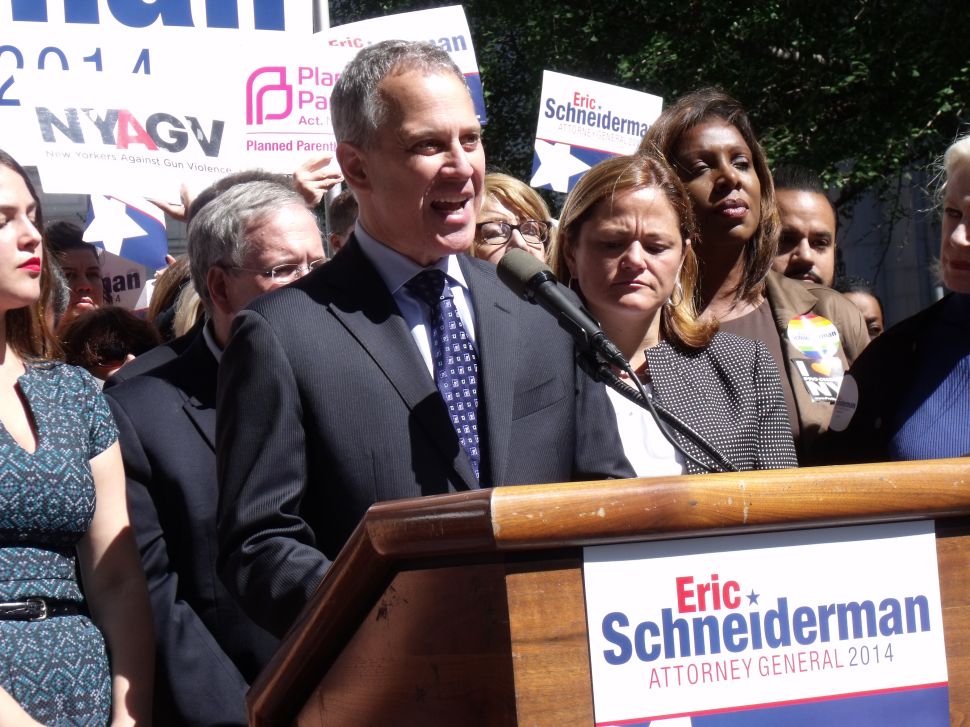