Bronx Councilman Fernando Cabrera said he arrived at his polling site today to cast a vote for himself in his race challenging State Senator Gustavo Rivera–only to find his name was not in the poll book.

Mr. Cabrera said two full pages were missing from the register at P.S. 310 in his home borough, preventing him and a number of other residents from casting their ballots normally. The five-year councilman and evangelical preacher immediately penned a letter to the city Board of Elections complaining.

“I am requesting an immediate investigation, and filing a Formal Complaint, of such specific voting irregularities, as I fear this instant irregularity involving my exercise of the right to vote, is very possibly more widespread in this election,” read the missive, which Mr. Cabrera also released to the press. “The right to vote has been achieved at a great price. It is to be safeguarded for all of our citizens, irrespective of their race or ethnicity.”

The Board of Elections confirmed that there was an error in the composition of three poll books in the Bronx, one in Manhattan and one in Queens–though it reported it was speedily replacing them.

“We regret the inconvenience the councilman experienced, or any voter, but this is not indicative of a widespread issue,” Board of Elections Executive Director Michael Ryan told the Observer, noting that the agency oversaw the compiling of 5,600 registers citywide this year.

Mr. Ryan explained that this is the first year the Board of Elections is using alphabetically organized “alpha tab” style poll books, which make it easier for voters to find their name and signature, but have the drawback of being organized by hand.

“Whenever something is done by human beings, there is potential for human error,” Mr. Ryan said.

The agency director said that he had a quality control team in place to check the books, but that a few errors apparently slipped by. The agency said it reprinted the five faulty books and has already returned them to the polling places.

Mr. Ryan also noted that anyone who found their name missing from the book could also vote via affidavit ballot. There is as yet no official figure on how many people were inconvenienced.

Mr. Cabrera did not immediately respond to questions as to whether he was ultimately able to vote. He is seen as a long-shot against Mr. Rivera, having launched his campaign with the support of the State Senate’s breakaway Independent Democratic Conference–support the IDC withdrew upon agreeing to caucus again with the mainline Democrats.

Mr. Cabrera and his high-profile supporters, Congressman Charles Rangel and Public Advocate Letitia James, came under fire for his conservative views on abortion and same sex-marriage, and after a video emerged of the councilman praising Uganda’s draconian anti-gay laws. 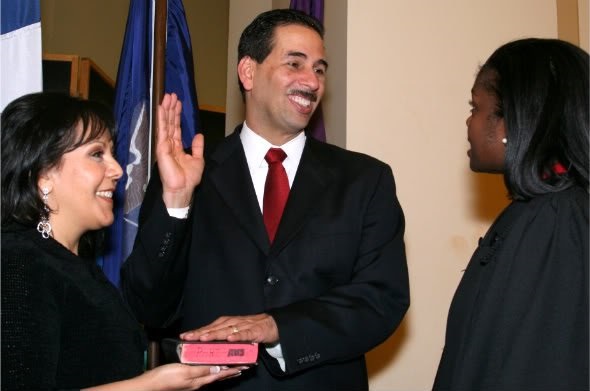