The Skeleton Twins, opening this weekend, features not one, but two suicide attempts within the first five minutes of screen time. Don’t think that means there isn’t more suicide and depression later on in the movie. The film is dark, people. All the more reason why, at first glance, the words “Starring Bill Hader and Kristin Wiig” look a tad out of place on the promotional poster.

But don’t fear, Stefon fans! Mr. Hader’s foray into drama is not a reinvention of any sorts. It is just another stop on a long, long journey.

“It’s the biggest part I’ve ever had in a movie, and I was kind of excited that the biggest part I’ve had is in something so different. But it wasn’t a conscious effort to change my image or anything like that,” Mr. Hader told me over the phone from sunny Los Angeles. “I think that’s the thing I learned at Saturday Night Live — any time I would try and strategize, I would always, always fall on my face. Things worked out when I tried to make it about what I was feeling at that moment, and what I was in to in that moment of my life.”

And it would appear that what he is “in to” at this moment of his life is some really tragic stuff. In Skeleton Twins Mr. Hader plays Milo, a gay never-got-work actor that moves back home from LA after a failed suicide attempt (a whole lot of trigger words in that sentence). But, funny enough, the part isn’t that far off from a young Bill Hader, who moved from Tulsa, Oklahoma to Los Angeles to become a filmmaker. Once he got there, he hit a brick wall pretty similar to Milo’s.

“The thing I related to when I read the script, was the whole flying out from your hometown to LA to ‘make it,’ thing” Mr. Hader said. “You do the jobs you get to pay the bills, and then you haven’t done anything creative, and it gets really discouraging. I mean I’m the only one in Tulsa, Oklahoma that has Final Draft on my computer. Then you show up and go to any coffee shop in LA, and there are a hundred people your age with Final Draft. And you go ‘fuck this. I don’t want to be like this.’

Far be it to say that as an actor most known for SNL (or, say, modern day underrated best movie ever Hot Rod), digging deep in the emotional well was an easy task. Having one of his role models (Ty Burrell) and good friends (Ms. Wiig) on set with him helped, but the real key was actually ignoring not only them, but everything else.

“You know you stay up the night before, learn your lines, see what your scene is about. Then you show up, and its happening, and you have to empty yourself a little bit,” Mr. Hader said. “You just don’t want to over-think things. It’s like there is tons of preparation, and then the moment they say action you just forget everything. But that preparation is ingrained in you somehow.”

Ironically enough, it’s funny to even be having this conversation about Mr. Hader’s momentary departure from the comedy that made him a household name, because comedy was originally far off his radar. His early days as an aspiring filmmaker were marked by odd jobs that ranged from the boring to the bizarre. A highlight: one week spent as a “PA kind of slash stage manager” on the Playboy Channel’s Night Calls.

It wasn’t until he had been living in LA for five years with no major creative successes that he started taking classes in comedy at The Second City. He had only been at it for a couple years before he got the call to come to New York, and SNL.

“When I got to Saturday Night Live, it was a lot like going from pre-school to Harvard, and it took a long time to figure stuff out,” Mr. Hader said. “But it was the best place to learn, and I had a lot to learn when I got there. I don’t want to give you the impression that I got to SNL thinking ‘Hey, I’m the greatest.’ It wasn’t that at all. It was like ‘Hey, you have a natural thing for this,’ and then SNL fostered it.”

So on Mr. Hader bounces from project to project, not unlike those early LA days, only the jobs are more high profile than live sex shows recently. And whether the job calls for comedy, drama, something in between, or even to star in a Judd Apatow movie opposite none other than Amy Schumer, Mr. Hader still seems to be enjoying the ride.

“If you would have told me when I started SNL that me and Kristin would be in a movie like Skeleton Twins, I’d have been like, ‘whaaaaat?'” Mr. Hader said. “Same way, if someone said a year ago, ‘Yeah, you’re going to be the romantic lead in a Judd Apatow movie with Amy Schumer,’ I would have been like, “whaaaaat?’ You really have no idea, which is what is exciting and terrifying about the whole enterprise.” 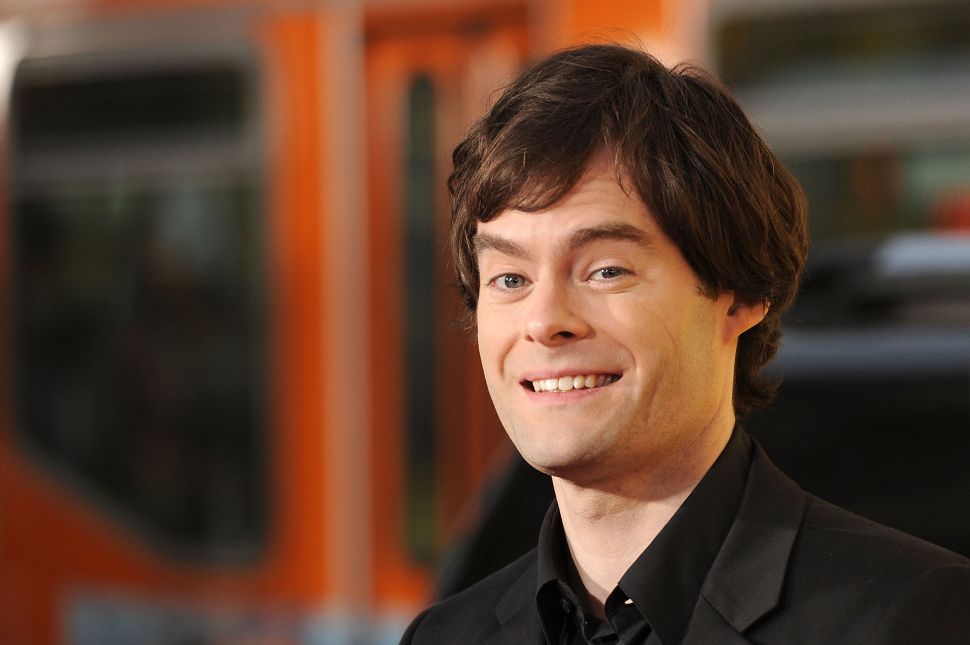