The ad–entitled “What’s Wrong With Her?”–hits Ms. Rice for firing 12 female lawyers who were working part-time in the Nassau D.A.’s office while raising their children shortly after she assumed the role of prosecutor in 2005. The New York Times criticized Ms. Rice’s order for the lay-offs as “odd, not to say unnerving” and one “that could have been hatched in the 1970s.”

“Upon becoming district attorney, without conscience or warning, Kathleen Rice eliminated the positions of twelve working mothers who worked flexible shifts to care for their children,” the Blakeman ad’s voiceover states.

The ad, provided early to the Observer, then cuts to a woman, who chimes in, “What’s wrong with her?”

The ad continues then to rip Ms. Rice for keeping her campaign field director, Zach Tierney, on staff after he posted several racially and sexually tinged messages on Twitter. The ad calls attention to one particular tweet Mr. Tierney, who uses the Twitter handle “brotis redding,” made where he jokes about assaulting and enslaving women.

“#ImInTheFriendZoneBecause I have progressed past public physical abuse of women, but not quite past viewing them as property,” Mr. Tierney wrote on April 6.

Ms. Rice’s campaign said it disciplined Mr. Tierney, but did not relieve him of his duties–a decision Mr. Blakeman’s ad savages

“And Kathleen Rice refused to fire her campaign aide when he mocked the physical abuse of women…and considers women a man’s property,” the voiceover again.

The camera then cuts to another woman, who appears disturbed at the news.

“And Rice is OK with that? What’s wrong with her?” the woman says.

Mr. Blakeman, former speaker of the Nassau County legislature, unsuccessfully sought the state comptroller’s office in 1998 and the Republican nomination for United States Senate in 2010. He also weighed a campaign for New York City mayor in 2008, before incumbent Michael Bloomberg successfully obtained a term limits extension and ran again.

Ms. Rice’s camp defended her record with female employees, arguing she had improved the standing of working mothers and all women in the office. The Rice team attacked Mr. Blakeman’s history in the Nassau County legislature.

“Kathleen Rice has increased the number of women working flexible schedules, she’s achieved gender parity in the office’s management structure, she eliminated her predecessor’s 30% gender pay gap, and she’s earned endorsements from every women’s organization involved in this race,” said spokesman Eric Phillips. “It’s not surprising Bruce Blakeman would feel the need to distort this record rather than focus on his own history of raising taxes, increasing deficits, and advocating for corporate tax breaks at the expense of middle-class families and college students.”

A transcript of the ad reads as follows:

Voiceover: “Upon becoming District Attorney, without conscience or warning, Kathleen Rice eliminated the positions of twelve working mothers who worked flexible shifts to care for their children.

Voiceover: “And Kathleen Rice refused to fire her campaign aide when he mocked the physical abuse of women…and considers women a man’s property.”

Neighbor 2: “And Rice is OK with that? What’s wrong with her?”

Watch the full ad below: 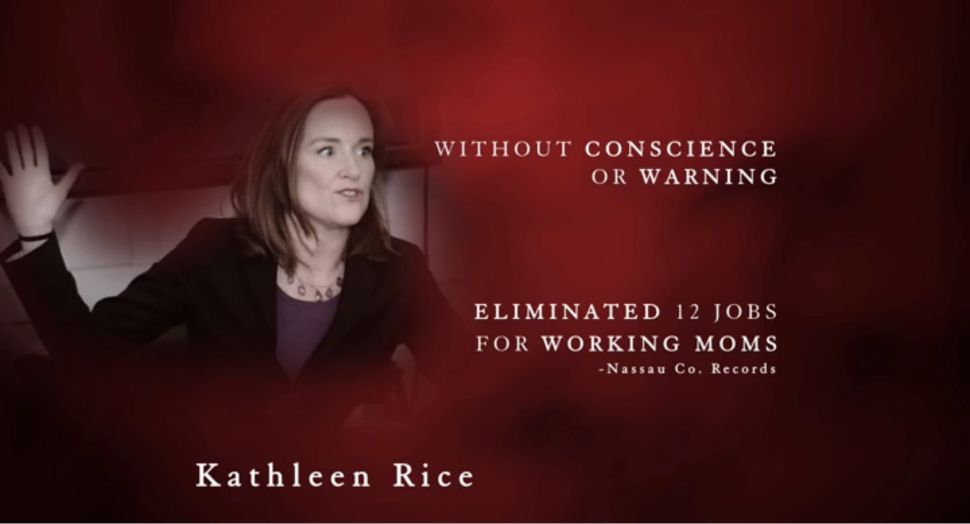