Gotham is still trying really hard to find what kind of show it wants to be. And honestly, there are moments where I see a spectacular show just under the surface of the show that is actually happening on my TV. And like most people struggling to find its identity, Gotham thinks it can solve its problems by yelling really loudly and often. Seriously, I counted four heated arguments and at least two nose-to-nose confrontations within the first ten minutes alone. And every single argument is clunky and incredibly forced. I’m just trying to do what’s right, is said a whole lot in many different ways.

Ben McKenzie’s Jim Gordon continues to be just a little too straight laced. Like I get the feeling this guy would walk into the commissioner’s office and voluntarily hand in his gun and badge if he ever accidentally jaywalked. And even then, his set jawline and gritted teeth feel out of place in the campiness permeating the rest of the show, in which villains gleefully high-five after kidnapping children and Edward Nygma is a skulking creep with 3 minutes total screen time this season.

However, I’m still #TeamPenguin all the way. Say what you will about the show, but I will watch Robin Lord Taylor’s Oswald Cobblepot stab as many frat bros in the neck every day of the week and twice on Sunday. But alas, this isn’t Utopia.

As for the rest of this week’s shenanigans, I’ve put together a handy list with some info on every off AND heavy-handed reference this show made, because lord knows this show’s plot progression is 95% references.

Who is Selina Kyle?

Well in case you missed the little street thief’s love for cats in the pilot, or her nonstop insistence that she is called Cat, or her penchant for scratching people’s eyes out as a 14 year old, Selina Kyle is the real name of Catwoman, the future nemesis and sometimes bone-partner of Batman.

And yes, for those most familiar with the most recent film adaptions of Batman, that does mean she unfortunately grows up to be Anne Hathaway.

Arkham Asylum, a Batman staple dating back to 1974, is Gotham’s resident instituition for the criminally insane (not to be confused with Blackgate Penitentiary, which is only for the criminally criminal.) It’s most defining feature is that its really, really easy to break out of, especially if you’re fond of riddles, felines or dressing like a clown.

Which might be why on Gotham the institution has been closed for 15 years. In most of the comic’s history, Arkham hits a bit of a hiccup when its founder, Amadeus Arkham, has to be incarcerated in his own asylum after finding his daughter’s head in a cuckoo clock. Coming soon to Fox?

What was the deal with that Lazlo waiter guy?

There’s a solid chance that Lazlo really was just a waiter in Fish Mooney’s club that she keeps around “for exercise,” because even crime bosses need that sweet lovin’ from time to time.

OR, Lazlo’s name could be in reference to Lazlo Valentin, better known as Professor Pyg. Professor Pyg appears sporadically in the comics, but most notably in Grant Morrison’s Batman and Robin series. Prof Pyg’s goal is to make people “perfect,” which he most goes about doing by lobotomizing them and fusing masks to their faces. Comics are weird you guys.

So what I’m say is, cue the deleted scene from “Selina Kyle” where Lazlo the waiter gets thrown into an alleyway after Falcone’s goons beat his ass, where he is found and raised by a family of pigs.

Those two people who are going around kidnapping homeless kids in this week’s Gotham make frequent reference to the Dollmaker. Now, there’s actually three different Dollmakers, so bear with me.

The first was an enemy of Plastic Man in 1968, but my young mind can’t comprehend that far in the past. The second Dollmaker is Anton Scott, and he debuted in 2011 in the pages of Supergirl, but that’s ABC’s territory. The third Dollmaker debuted as part of DC’s reboot, the New 52, with the real name Barton Mathis. This particular Dollmaker cut the Joker’s face off and later made a tapestry by sewing people together. So, really, your favorite Dollmaker is just a matter of personal taste.

Also, Arrow already had a Dollmaker but let’s not open that can of worms.

Was that Carol Kane as Oswald Cobblepot’s mother? Why yes, yes it was.

And just who were those two people kidnapping kids for the Dollmaker?

As far as I can tell, those two weirdos were made up just for Gotham (IMDB has them down as Patti and Doug.) So, good for Gotham! You did it! Originality!

Although I wouldn’t be surprised if Patti turned out much later in life to be Mason from Snowpiercer. 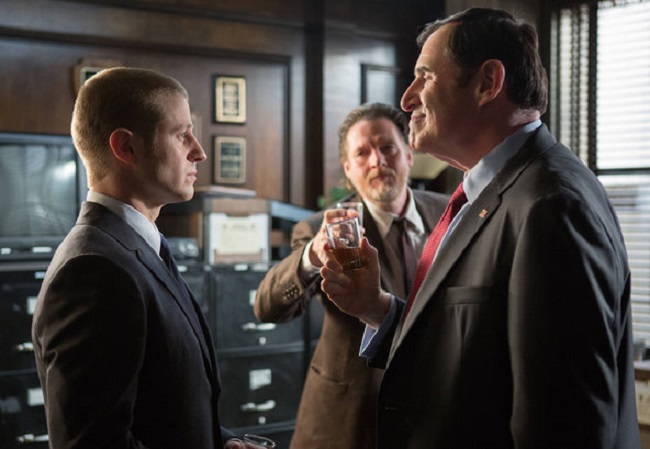