So imagine you’re at a party, when the cool kid in the room starts telling a joke. After he’s done, he winks at you and nudges you in the arm. Nice, sweet, you’re in on the joke. But then like a minute later he does it again, wink nudge, and you’re like ‘that’s kind of weird.’ Then again, and again, wink nudge, and you wonder how many times this can happen in a short amount of time before you’re like “dude, stop fucking nudging me in the arm.”

Depending on how you feel about that situation right there, you either loved or hated the series premiere of Fox’s Batman prequel Gotham.

Full disclosure, I’m a total Batman nerd, so i’m completely biased here. But even for me, the pilot’s parade of familiar faces was a little much. And it was even harder to stomach when the show throws the concept of subtlety out the window to the point where I felt like a child being walked hand in hand through a Batman museum.

“If I want riddles, I’ll read the funny papers,” Donal Logue’s Harvey Bullock says to the guy who will one day be THE RIDDLER. (Get it??). The intriguing little street thief we see in the opening shots steals some cash, but also milk to feed her cats wink nudge this is Catwoman. Oh, that little girl’s name is Ivy, that’s odd, and btw look at ALL THE PLANTS IN HER APARTMENT. Perhaps the most heavy handed of references are directed at Robin Lord Taylor’s Oswald Cobblepot, who will one day grow up to be the Penguin. Although this might be chalked up to the acting talents of Random Thug #2, in his delivery of “Take it easy (awkward long pause, then heavy emphasis on), Penguin.”

But the pilot is also a double-edged sword (or Batarang if you’re into that kind of thing which again I totally am.) Because when the show isn’t being a game of “hey look at this person you know!” and it’s doing its own thing, like something closer to Law and Order: Gotham City, it’s actually really entertaining.

To be frank, I’ve seen Thomas and Martha Wayne murdered in front of their young son Bruce so many times, I don’t even feel bad anymore. So the show was smart to do away with that right off the…bat. After, the real story picks up when Harvey Bullock and Jim Gordon pick up the case. Jim, of course, is played by Ben McKenzie who does a great job here shedding the image of “hey the guy from The OC lol that’s kind of lame.”

After some extensive questioning of some sketchy looking muggers (and one that looks a lot like Louis C.K) their search leads to newly-created villain Fish Mooney, played by dually by Jada Pinkett Smith and something on Jada Pinkett Smith’s head. Fish Mooney owns a nightclub that never seems to have any people in it, so good thing she has that side-job of crime boss.

Based on some hot tips from Fish, Bullock and Gordon investigate Mario Pepper, who word on the street was trying to sell Martha Wayne’s necklace (I could be wrong, but I’m pretty sure there was heavy usage of cop terms like hot tips and word on the street.) This doesn’t go well, and Mario Pepper leads them on a chase through rooftops and a Chinese kitchen, because there’s always got to be a Chinese kitchen. Harvey ends up shooting very uncooperative Mario, and they find the necklace in a baggy o’ drugs in his apartment. Case closed, roll credits.

The frame job doesn’t sit well with Jim Gordon, who appears to be the only straight cop in the entire department. He confirms it wasn’t Mario Pepper by checking his shoe closet for shiny shoes. You see, Bruce Wayne told Jim that his parent’s murderer had shiny shoes. And Mario Pepper’s shoes are filthy! The whole town’s crooked, I says!

Jim makes the questionable decision of confronting Fish about it in her own nightclub by himself. This leads to him being strung up in a meat locker, because no criminal organization is complete without it’s own meat locker. Harvey Bullock, showing his soft side, goes to try and negotiate Jim’s release. He ends up strung up in the meat locker next to Jim. Harvey’s negotiation tactics of “threaten the powerful crime boss while in her meat locker” could use work. Unfortunately that crime boss is kind of crazy, so she orders two to be chopped up by this guy.

Someone I was watching with actually said, “Hey wouldn’t it be funny if that guy in the mask turned out to be Bane?” seconds before that guy in the mask gets shotgunned in the face. So, no, that’s not Bane. You see, Carmine Falcone shows up to save Gordon and Bullock. Falcone is like the crime boss to all the other crime boss, and he’s also a gentleman and there’s rules to these things dammit, so random cop killing is off the the table. (Falcone is also also Rawls from The Wire.)

Meanwhile, Bullock’s negotiation did lead Fish to find out that Oswald is an informant. This, naturally, leads to her beating the shit out of him with a baseball bat in front of a terrified standup comedian. (The standup, I think, is the show using its own lack of subtly against us. Like, “you think this is the Joker, don’t you??” It’s totally not.)

Because, like Carmine said there’s rule to this thing dammit, Jim can get away cleanly if he kills Oswald on a sketchy Gotham pier. Jim’s really conflicted about this because murdering people, whether they look like penguins or not, isn’t really his thing. He walks Oswald out to the end of the pier, but shoots his gun next to Oswald’s head. Which, ow my fucking ear, yeah, but Oswald is still alive and everyone is happy with Jim the apparent penguin-killer.

Jim, freed from his meat locker bondage and now a fake-murderer, goes to see little baby Batman to tell him his parent’s killer is actually still out there. Baby Batman, who has taken to walking around roof tops in an attempt to “conquer fear,” is pretty okay with this news because he’s looking to kick some murderer ass by himself. During this whole thing, Sean Pertwee’s Alfred Pennyworth manages to be a dick in the most English ways possible and it’s the best version of a well-established character on this show. Eventually, Jim tells Baby Batman that “fear doesn’t need to be conquered,” and Baby Batman forgives Jim for killing the wrong guy. It’s a nice scene, but it veers a little too close to “Darth Vader actually built C3PO” territory. And if you don’t understand that reference, I envy your life.

This episode ends with Oswald emerging quite penguin-like from the waters of the Gotham City River and murdering some poor fisherman. He then goes full-Devito while eating the guy’s sandwich. If you weren’t sure this man is a future super-villain, who the fuck murders a guy and eats his sandwich. Come on, now.

So with the pilot over, I’m incredibly intrigued by the rest of this season. Heavy-handedness aside, mostly every performance was on-point (although Allen from Major Crimes needs to scale back on the white strips), with a show-stealing performance from Taylor, who before this was best known either as the guy with ADD from Accepted or one episode of The Walking Dead.

And acting aside, the show just looks awesome. New York really has been transformed into Gotham, and despite the fact that every room in this show has a flickering light of some kind, the atmosphere and exterior shots are incredible. But now the chess pieces are set up real nicely, it’s time to knock the board over and flip off the person they’re playing against. We’ve seen origin stories billions of times, and this show has the awkward “this is this person!” phase out of its system. The only way it survives now is if it becomes its own thing, with familiar faces integrated naturally.

Except for the Joker. The Joker doesn’t have a set back story and if this show gives him one I will complain so vigorously on the internet /end nerd rage. 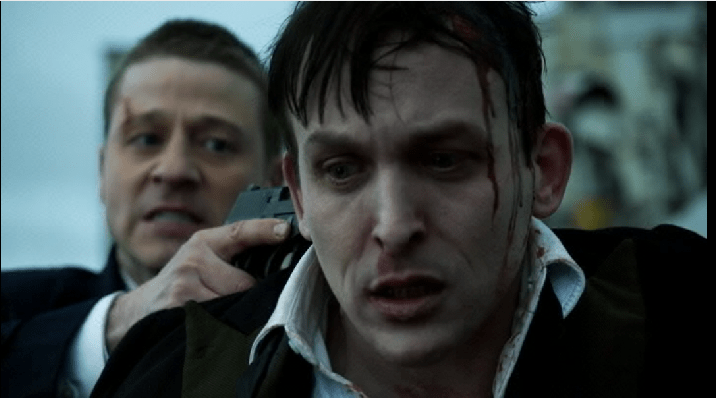