Despite more than a decade of gentrification, shifting demographics and a wall of glassy buildings that have gone up on either side of the north-south corridor, most of the passersby were black and Hispanic–ordinary workers, residents and shoppers, with a few obviously mentally ill or under the influence individuals tossed in. Mr. Hawkins, who was polling at seven percent as of last month, said he thought the area was ripe to turn Green.

“It’s a good place to meet voters, it’s not like upstate rural New York. These people are being taken advantage of by the Democratic Party and ignored by the Republicans,” Mr. Hawkins said, arguing he could appeal to minority voters despite their overwhelming history of supporting Democrats. “You get to the people who aren’t voting, because they are totally disgusted, they’re open to alternatives.”

A San Francisco-born Dartmouth graduate who now unloads trucks for UPS in Syracuse, Mr. Hawkins seemed out of his element. With anti-stop-and-frisk and pro-Green Party buttons pinned to his Teamsters jacket, and clutching campaign literature and a clipboard holding pages of blank e-mail list sign-up sheets, Mr. Hawkins approached and followed dozens of apparently uninterested pedestrians.

Some Harlemites seemed sympathetic when they stopped to hear Mr. Hawkins out.

“The rich people, like you said, they don’t care about anybody,” said Angel Rodriguez, who said he would cast his ballot for Mr. Hawkins. “We got to vote for working people, because the rich people only come to the poor neighborhood when it’s election time. The people here are poor, they have no jobs!”

Mr. Hawkins said he was hopeful about his chances–not to win, but to keep his party on the ballot another four years and even break into the double digits on Election Day. He pointed out that the seven percent he is currently drawing is far stronger than the barely one percent he pulled in 2010, when he came in third behind Mr. Cuomo and Republican Buffalo businessman Carl Paladino.

He also noted Ms. Teachout’s surprisingly strong 34 percent performance on primary night, and said many of her supporters were joining his team–even though she declined to endorse him or anyone else. 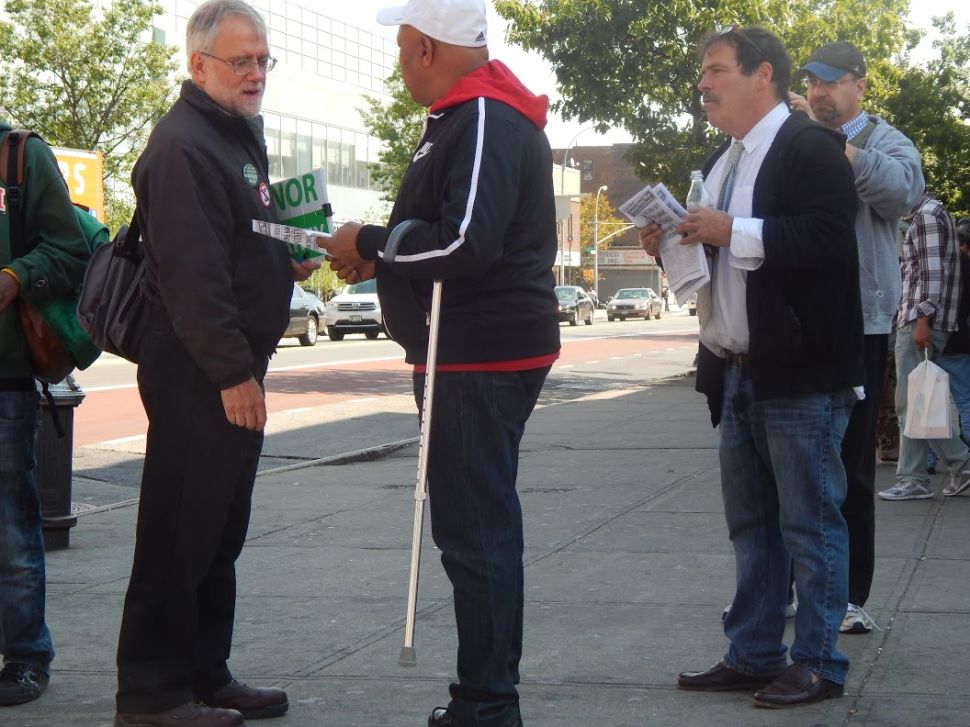