Sabrina Sucato, a Vassar College senior, reads about the latest sartorial trends in fashion magazines, browses the web for street style shots and searches blogs for runway inspiration. Not long ago, Ms. Sucato, who wants to pursue a career in fashion writing, would have cut her teeth at a campus publication. But instead, she went national and become a style guru for College Fashionista.

College Fashionista is one of a slew of national advice websites, written by and for college students, that have become part of a growing media phenomenon.

In addition to College Fashionista, there is Her Campus and Spoon University. The lifestyle networks of blogs aimed at college-aged women have chapters for various schools but remain unaffiliated. They are a profit-driven platform that can be easily replicated at colleges and universities, more akin to a fast-food franchise than a legacy college newspaper or the student-led alternative publications that are a college staple.

And the model has worked. Her Campus, for instance, which bills itself as “A Collegiette’s Guide To Life,” was founded by Harvard undergraduates Stephanie Kaplan, Windsor Hanger Western and Annie Wang in 2009. It started as a campus fashion publication, but attention from students at other colleges interested in starting similar sites inspired the co-founders to create a platform that could be used at a national level.

The co-founders claim it has been profitable since its launch, and boast of 3.5 million unique visitors each month, a social media reach of 1.5 million and a presence in eight countries. The site now hosts events and conferences, sends out a newsletter and has an online store.

Spoon University, which covers food, began at Northwestern University in 2012 as a nonprofit, print publication. But founders Mackenzie Barth and Sarah Adler, who graduated in 2013, saw the potential in the market and created a national, digital platform on which schools could manage their own pages.

Since September 2013, Spoon has expanded from five to 45 schools, and the founders expect this number to double or triple within the year. The site rakes in 250,000 unique visitors per month and operates with the help of 1,000 student contributors.

“It’s a place for all of us who are going through a place in our lives that’s kind of ignored,” said Ms. Adler, “this in-between stuff, from not knowing how to cook at all to being a functional adult.”

College Fashionista was created by Amy Levin, who launched the site in 2009 after style blogging on her own during her senior year at Indiana University. Its Facebook page has over 33,000 likes, and the site has 1,500 contributors and chapters at more than 400 campuses.

Writers, who work for free, are selected  after a stringent application process. Many say the sites lead to future jobs, and Her Campus, which provides editing, training and networking opportunities with industry professionals, claims it “serves as a career launching point for college journalists.”

“If you want to be a writer, bylines are way more important than lines on your résumé, and these sites are great places to get them,” Julia Rubin, former online features editor for Teen Vogue, wrote in an email.

Others, like Perri Weiss, a rising senior at the University of Michigan and the marketing director of Spoon’s chapter there, join for social reasons. “I am a huge foodie and love trying new things, restaurants, dishes,” she said.

Still, not every student journalist finds writing for a national or international platform to be the most satisfying option.

“The experience of writing for one’s own campus publication provides the opportunity to both learn from and shape the school culture that they experience in real time,” Meredith Bilski, editor in chief of Brown University’s BlogDailyHerald.com, said via email.

Rosa Escandon, who works for the University of Pennsylvania’s 34th Street magazine, thinks the sites could put out more hard-hitting, investigative pieces on issues important to college women.

“They don’t really focus on issues in the way I would expect something that bills itself as an all-female website probably wants to or should,” Ms. Escandon, who is involved with feminist activities, said of Her Campus, whose recent headlines include “7 Things Sorority Girls Won’t Tell You about Being in a Sorority” and “6 Workouts You Can Do While You Study.”

But others contend that these sites offer advice that college students find useful, despite that the content may not be as serious as some would like. Many of the items featured on College Fashionista, for example, can be purchased at thrift or chain stores, and features on what to wear are geared towards college events, such as homecoming, tailgating or final exams.

And the sites claim to be doing students a service—providing them an outlet to discuss problems, trends and experiences only college students face, giving them both a platform and a guidebook. The writers most often share the reader’s age and gender and could possibly be sleeping in the dorm room next door—qualities the writers of other blogs and magazines usually don’t share.

Ms. Sucato found the experience of writing for a popular online publication appealing for reasons that go beyond résumé padding. As a style guru, she said she has gotten the opportunity to learn more about the industry and make connections by participating in monthly chats with big names in the field such as Sally Hanson and Whitney Port.

“Our hope is that our contributors land jobs in the industry,” Ms. Levin said. “Our brand and their careers with us is just the starting point.”

And, of course, the more success stories these blogs produce, the better it is for their brands. 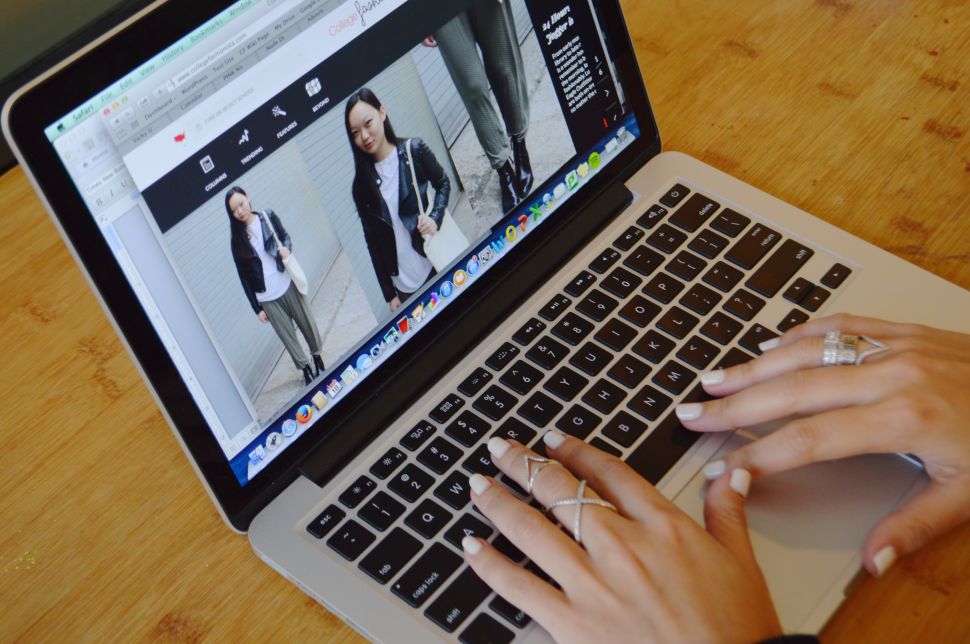