My acting career began out of procrastination.

I’d seen crews filming Law & Order or something a few times on my block—52nd Street between 8th and 9th, but it wasn’t until I literally bumped shoulders with Tina Fey in front of my apartment that I decided to walk into the casting agency. The Internet told me that background work (i.e., being an extra) was easy money, but really, I just wanted the distraction. My thesis was due in a few weeks.

A few nervous-looking people milled around the midtown offices of Central Casting at the regularly-scheduled “become an extra” walk-in time. Each wore heavy makeup and nervous expressions. I rolled in, a slovenly grad student with unkempt orange hair, smiled awkwardly for a photo, and walked out, having left my email and phone number.

The next day, they called me. “We need twenty-something partygoers for Gossip Girl. Can you be in SoHo in an hour?” I could. Did I have something hip to wear? It didn’t matter. Just show up.

Thus started a short string of 13-hour days (at $85 a pop) of pretending to mill about pretend train stations, or pretending to hold glasses of pretend wine while Chuck Bass kissed some pretend French girl, to Blair Waldorf’s horror.

Being an extra sucks, it turned out.

One primarily stands around, praying for something to do. This was pre-ability-to-afford-iPhone and pre-nice-New-York-weather. (Plus, they don’t like to catch you on your phone.)

So, I tried to fill the time by figuring out how one works one’s way up from human background prop to getting to kiss pretend French girls on camera.

They say that becoming an actor is hard. It takes years of auditions and face time with casting directors to work your way out of the shallows, the myth goes. And even then, “making it” is a dice roll. Actors don’t “break in”; they get “lucky breaks.” My newfound friends in the Extras department echoed this, and explained a few more nuances:

First of all, in order to go anywhere as an actor, you had to join SAG (the Screen Actors Guild). The only way to do that was by paying dues, literal and metaphorical. Entry required a certain number of speaking parts in SAG-worthy productions. And once in SAG, you respected the pecking order of those who paid their dues before you.

How does a lowly Extra get said speaking parts? I asked. My new friends shared a secret with me:

“When they call you in for a scene, try to position yourself so you’re in the shot,” they said.

“Try to do a really good job at whatever you’re doing, so you maybe catch the director’s eye.”

Then came the good part. “Then, if the director realizes that he needs to write in a little speaking part, like the waiter has to say something, he might pick you! And if you do that a few times, you can get your SAG card!”

Hmm. Had this ever happened to them? “Not yet, but we’ve definitely seen it happen a couple of times.”

And for how long have you been doing this? “About two years now. We’ve been on all the shows…”

Now, this may not be the tip every actor gets in actor school (you can also audition for speaking parts), but I got versions of this same advice from multiple extras. After estimating that the average number of extras for the shows I worked ranged between 50 and 150, I realized that I now knew why you don’t hear many actors say that they got their start this way.

Once you got your SAG card, they said, getting your break was a matter of showing up and putting on a good show—but you’ve gotta wait in line behind the others who have been paying dues longer than you.

This career advice was, in a word, terrible.

Yet. It mirrors the Great American Success Advice we hear from high school counselors and on-the-job mentors: work hard, put in your time, get experience, and be patient. When you’ve paid your dues and a spot on the ladder opens up above you, take it. Put yourself in spots where important people can see you, and cross your fingers.

Somehow, from management to government we’re married to the anachronistic notion that time spent somehow equals merit. Yet, when you look at presidents of the United States, you find men who spent the least amount of time paying dues in congress at the top of historians’ rankings. (I explore this presidential data in depth in Smartcuts.) When you look at breakthrough companies, the best-loved CEOs, and the most transformative products, you find huge success on both ends of the experience spectrum. In fact, history shows that many geniuses, like Newton and Picasso, did their most influential work in the earliest years of their careers.

And though some terrific and deserving actors spend decades working their way into the spotlight, award-winning performers like Jennifer Lawrence come out of nowhere, skipping the years of dues by being naturally talented and unique. And we often find folks like Dwayne Johnson and Zoe Saldana crossing over from other industries (wrestling and ballet) instead of slogging it out for impromptu lines from directors with 150 other human decorations.

Tesla invented alternating current (and a hundred other things) by breaking conventional wisdom of his peers, not following it. Larry and Sergei didn’t wait until they’d “paid their dues” as engineers and businessmen to build Google. Lena Dunham made huge waves—and became a sensation—by writing her own starring roles instead of auditioning her way up the chain. If Ed Westwick had followed my Extras’ advice, we’d have never gotten Chuck Bass in the first place (he went to school for music and theatre, landing his first acting gig straightaway, a year before Gossip Girl).

When you look at stories like theirs, you realize that rapid success often is based on merit (being right for the part), not time spent hanging out (wishing for the part). And yes, countless great actors like Brad Pitt and Samuel Jackson worked hard with little recognition before the spotlight found them. Hard work is part of any meaningful journey. It’s just the linear thinking about loyalty and dues that we keep repeating that’s wrong.

Upon realizing that the best route to becoming a movie star was to circumvent the passive career path my Extra friends were all trudging, I also realized that I would actually have to be good at acting to get anywhere. Plus, my thesis was due soon. So I stopped answering Central Casting’s calls.

But who knows. One day Hollywood may need an orange-headed tech journalist with encyclopedic knowledge of IT Crowd quotations to fill a last-minute role. In which case I’m trading in my laptop for a pair of Ray Bans and padding my resume with “Gossip Girl, Chuck Bass Understudy” and “proud member of SAG since 1984.”

Shane Snow is author of Smartcuts: How Hackers, Innovators, and Icons Accelerate Success, out September 9. 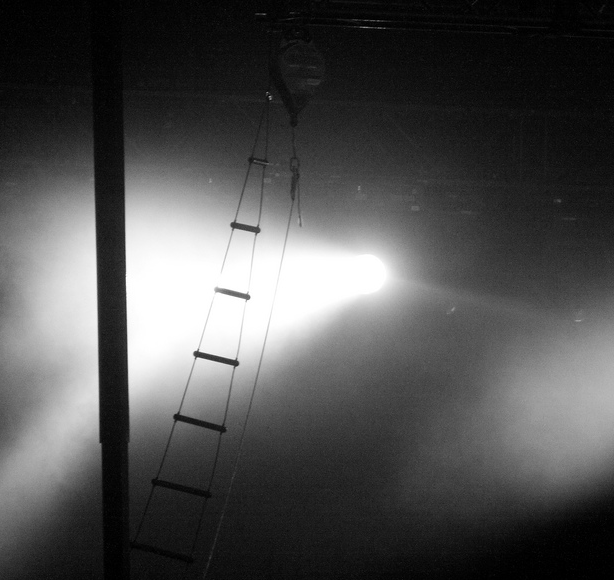