I wasn’t planning on playing the Kim Kardashian: Hollywood game.

It’s not that I have any ill will towards any of the Kardashian family members. I’ve watched several of their shows on E!, and I have a soft spot for Rob. But a video game? I didn’t have time for a video game. Furthermore, after investing over $600 in Candy Crush Saga, I wasn’t sure if I could trust myself, due to my addictive nature.

Plus, I didn’t want to contribute to Kim’s mega-fortune. (Not that she’d need my help; the game grossed around $1.5 million in its first five days.)

Then, at a lunch date with a very successful friend of mine, she whispered loudly across the table: “So have you been playing the Kim Kardashian game? I have. I’m an A-lister.”

I was shocked. My completely sane friend played the Kim Kardashian game? I suddenly realized, if she could play with such poise and control, maybe I could too. Were we the only grown-ups playing? I decided to investigate.

I went home and quietly downloaded the free game, and I wasn’t alone. Some of my fellow grown-ups at the Observer are open to their peers about their love of the game. However, I am not going to expose their identities, out of respect for their privacy.

“It’s like my dirty little secret,” said columnist and Observer contributor Jennifer Wright, and author of the upcoming historical biographic novel, It Ended Badly: The 13 Worst Breakups in History. Ms. Wright does not pay to play, but still is invested in the game, thanks to its addictive nature.

“My only rule starting playing it, or any game, is that I would not spend real life money on it,” she said. “I think it’s generally a bad idea to spend money on things that do not actually exist, like a cool new hat for your avatar when you could use that money on real things, like a real, actual hat for your human head.”

“I started playing out of sheer curiosity… I mean, a game about Kim K?” said Mark Perry, a 31-year-old stylist in Manhattan. “I like it though. My avatar is a guy that I tried to get to look like me as much as possible and I’ve been good so far about not spending money but I don’t see me stretching my willpower for too much longer.” Since then, Mr. Perry has spent “around $200” on the game.

“I only date people Kim sets me up with. I don’t care if they’re male or female. I just want to rise to the top,” said 34-year-old bartender/actress Alyssa Reno.  She’s invested $300 to purchase items in the game to help her get ahead.

I quickly became consumed in the game. It starts the same way for everyone. You’re an “E List Celebrity.” The goal is to make it to the A List with Kim’s help. The career you’re pursuing happens to be just like Kim’s own. There are photo shoots, endorsement deals, celebrity appearances in nightclubs, boutiques to manage. It’s all there, minus the sex tape with Ray J.

Kim even added her voice to the game, contributing witty bons mots such as “hey” and “good job.” For the first time ever, I felt like Kim cared about me.

The Glu Mobile game was the fourth top-downloaded free app over the summer, and also happened to be the fourth highest-grossing. Although I previously thought it was intended for kids, I discovered that the majority of players were adults ranging from 20 years old to early 40’s. In careers such as real estate, public relations, journalism, finance. Even government workers were getting in on the action, as evidenced by an accidental automated tweet from a player who’d accidentally linked their account to the EPA’s Twitter.

The game doesn’t appear to have an end. It sucks you in. You want to stop, but Kim just keeps showing up and giving you more fake career opportunities. Money spews like crazy from everywhere in Kim’s magical game. It’s free and nonstop. It’s hidden in fire hydrants, behind bushes, inside bottles of champagne. Simply tap every inanimate object, and cash comes flying out.

The most coveted form of currency in the game is “K-Stars.” They’re almost impossible to amass for free, but you’re always able to purchase them with your actual, hard-earned, real-life money. I held steadfast and didn’t give in to buying K-stars. I did buy some “limited edition” wardrobe specials for my avatar, but they were only $7.  A small price to pay for researching this story.

I adopted a boxer and a stray cat off the street for a total of 40 K-stars. Having a household pet increases your chances of making more money. Money and energy points erupt from your furry friend as soon as you pet them. If only animals could provide those things in real life.

Soon, my modeling career has taken off and I’m flying to Las Vegas and even Paris to participate in photo shoots and fashion shows.  A flight from JFK to LAX costs only $35 and takes less than two minutes, there are never any flight delays. Kim Kardashian: Hollywood is a magical game. A game where jet lag, debt, and binge drinking hold no consequence.

Kim invites me to be her personal model for a swimwear line she’s launching. The personal validation I’m getting from this game continues to grow. Then I start falling behind on real life. I need to get it together. I stop playing for two days, so I can actually get some work done. I log back into the game and my star has fallen. I am no longer an A-list celebrity. I’m down to B.  I go on a date with a pop star avatar Kim suggests, and I climb back up to the A-list.

“I’ll delete it soon, but I really want Kim’s hair,” says Ms. Wright. “It costs 100 K-stars though. It’s getting a little repetitive.”

And indeed the game is becoming monotonous, as I violently tap my phone screen to hit trees, birds and bottles for money. It’s taxing work, going to fashion shoots and nightclubs, waiting for my agent to call me for my next gig. So I distance myself. I decide not to quit the game completely, but just not to give it my all.

Then I realize that it doesn’t seem to matter how I perform during the “challenges” given to me during the game. No matter how poorly I do, or slack off, my star steadies at A-lister with over a million fans. Once you make it to the top, all you have to do in this game is show up, look good, and buy rounds of beverages and shots for partygoers. There’s no substance or message behind the game other than having fun, and looking cute.

How do you “win” the game? Legend has it, you must garner more followers than the real Kim Kardashian has on Instagram and Twitter combined. But like with Candy Crush Saga, and those other addicting games that keep sucking people in, and adding in level after level, there really is no end. It can go on forever. There are constant wardrobe update options, and travel options.

This game starts to depress me. I may have a closet of fabulous cyber clothing and accessories in the game, but in real life, I’m more of a bargain shopper than designer type of girl. There are absolutely no other options than possibly maxing out your own real life credit card to help your avatar get ahead in the magical bubble of the Kardashian game. I do take some fashion inspiration from my avatar and get a new haircut, in real life, and pay more attention to what I wear. So that has somehow affected my mood in a positive way. Then Fashion Week passes in New York and I’m slightly resentful that I’m not participating in a show, then remember: I am only a model on the video game on my iPhone. 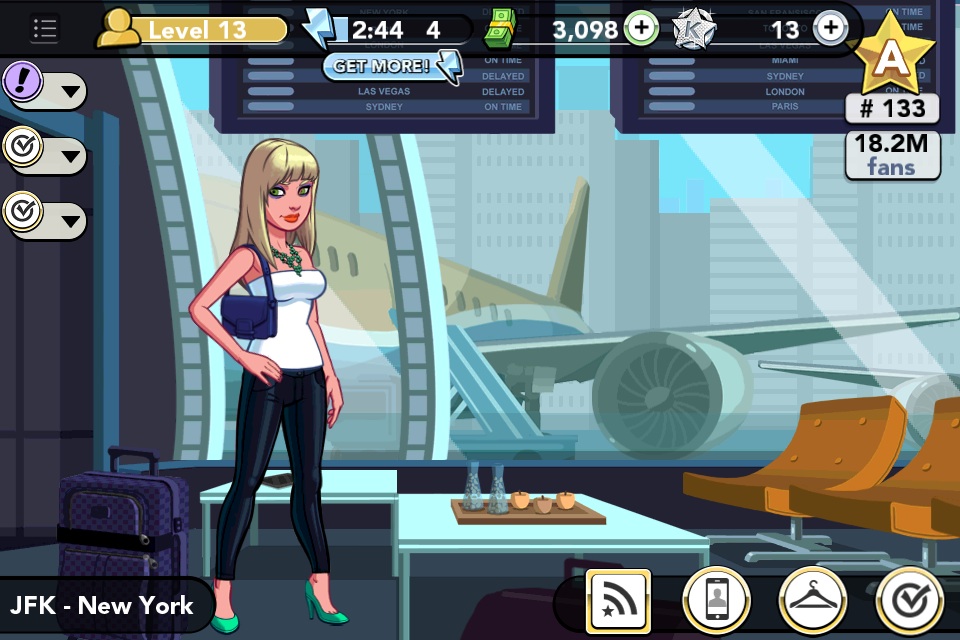