HOBOKEN -U.S. Sen. Cory Booker may kick out to another state in the remaining 46 days before Election Day.

“Should I be called,” he told PolitickerNJ.

But for the most part, Booker said he intends to campaign in New Jersey and help others – Roy Cho in CD5 and Aimee Belgard in CD3 among them.

PolitickerNJ asked the senator if this week’s Stockton College polling caught his eye.

The poll of 606 likely New Jersey 3rd District voters found Republican Tom MacArthur and Democrat Aimee Belgard each with 42.2 percent support of those surveyed. Another Stockton Poll showed Booker beating his Republican opponet in the Third District by nine points.

Is Belgard reaping the advantage of Booker putting the hurt on Bell?

“I’m very encouraged by Aimee Belgard, she is a person who is a committed public servant,” said Booker. “She’s not a partisan person, but someone who can build bridges.”

Burlington Democrats are attune to Booker’s presence on the ticket.

“She needs to win by more than 10 in Burlington and have a decent turnout to win,” a Democratic Party source told PolitickerNJ. “Booker will help.”

The source said Democrats are encouraged by good local candidates in Mt Laurel and Marlton – two towns with the largest persuasion targets in the county. 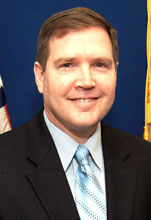