By now, you’ve probably watched some of–perhaps even all!–of Bojack Horseman, the cartoon show on Netflix created by Raphael Bob-Waksberg and starring Will Arnett as the washed-up host of a 90s family sitcom called Horsin’ Around. Living years later in that existential black hole of existence that is being a once-famous person (well, horse, Bojack is a horse) living in Los Angeles, Bojack is broken out of his cycle of bad choices, including the constant abuse of his assistant Todd (Aaron Paul from Breaking Bad, also one of the show’s producers) and chronic one-night stands with various animals (including Princess Carolyn, his agent, who is a pink cat voiced by David Sedaris’ sister, Amy) when his publisher (a penguin, natch), hires him a ghostwriter for his memoirs (who is a human). Bojack becomes obsessed with his ghostwriter, Diane Nguyen (Alison Brie). Her love –or more likely her approval– becomes the motivating force for Bojack, because she also happened to write the book on his childhood hero, Secretariat, and also because she’s engaged to his nemesis, an unflappably happy golden retriever named Mr. PeanutButter. (PeanutButter is one word.) Bojack spends early episodes trying to woo Diane with his material possessions and feats of daring (like stealing the “D” from the Hollywood sign), and can’t understand why, for someone like Diane, the stupidly cheerful Peanutbutter might be a better fit. Diane and Bojack are too much alike: thinking they are smarter than everyone around them while totally lost on how to navigate the world. But that kind of jadedness is also blinding: A running gag is that Princess Carolyn’s new boyfriend, Vincent Adultman, is just three kids in a trench coat doing that thing from The Little Rascals, but only Bojack can see it. And he gets stuck on that point, while everyone else appreciates Vincent at face value, which is that he’s perfect for Princess Carolyn and a good listener and oftentimes more mature than any of the actual grownups in the room. (I mean, also, they are talking animals. So…)

It’s silly but there’s something to it: Who hasn’t met someone’s new significant other only to judge them by some obviously faulty quality– “Ugh, this guy has such an annoying laugh/terrible job/won’t stop talking about yoga”–only to realize that the thing that bugs you about them might not necessarily bother your friend? The world does not revolve around us, or Bojack.

Horseman–both the character and the show–can be intelligent, depressing, bitter, childlike and cynical, sometimes all at the same time. It’s like watching Louie as a cartoon: except for the fact that while Louis CK wants us to see him seeing himself as an over-the-hill schlub, Bojack (at least for most of the season), is that kind of jaded-about-everything-but-himself, desperate dirtbag that you imagine makes up the majority of residents in Hollywoo (long story). Bojack is a sometimes great show: reminiscent of those adult comedies my dad and I used to watch like Dr. Katz or Duckman, that really seemed like they weren’t for kids not because they were on Adult Swim or anything, but because the subject matter they tackled was so fraught with those Dark, Grownup Anxieties. In a way, Bojack is the opposite of a show like Adventure Time, which is absurdist and self-contained and accessible.

By contrast, Bojack’s humor, neigh (Neigh!) its entire existence, is coded with references that you either get or you don’t: most of them visual, all pop culture-related puns. You know, like that Awkwafina song “My Vag?” No? It’s a huge hit on the Internet these days.

Or what about the second episode, which introduces the political news channel MSNBSea, featuring Tom Gumbo-Grumbo, a giant whale voiced by former MSNBC anchor Keith Olbermann. (The fact that his blowhole spouts every time he’s upset is perfect.) In fact, there are so many of these site gags that Buzzfeed was able to make a list compiling “136 Jokes You Might Have Missed” on Bojack. At times, it feels like Buzzfeed might secretly be the cosponsor of this entire shows. A lot of the humor on the show is derived from the fact that the fans of Bojack– read, women– are stupid and vapid and fickle.
[youtube https://www.youtube.com/watch?v=i1eJMig5Ik4&w=560&h=315]
“Yes it’s me, straight from the TV screen and into your shitty lives,” Bojack announces, only to find out that–jokes on him!–those stupid, vapid and unattractive ladies are interested in Andrew Garfield. Ha…ha? Get ready for a ton more obvious sex jokes, a lot of revolving around Bojack’s former TV daughter Sarah Lynn (Kristen Schaal), who is now….gasp!…30, and therefore just a human trash depository in terms of her relative worth in this world.

Bojack invokes many of these LA culture stereotypes(the damaged former child actress, the idiot stoner bro, the black cop, the bitter ex-partner, the hand-wringing agent, the out of touch producer, David Boreanaz) that don’t work on any other level than “Here’s a gross hooker. Look she’s had sex with a horse.” Unfortunately, the amount of self-loathing that Bojack feels, and how he battles his inner demons, is a less interesting experience than it maybe should be, since the writers of the show employ casually offensive humor in Family Guy-sized doses.

Which is not to say that Bojack is not hitting on some new and interesting territory. It is. But its whole is more inventive than its individual parts. The dialogue is not always on point, especially when Bojack, with Arnett’s growling baritone, has to deliver some devastatingly cruel or obliviously nasty punch line. Sometimes the humor just seems stale. As someone said at a party, “I’m sick of shows where the joke is that a character doesn’t say anything for a long time and just blinks and that’s the whole thing.”

But conceptually the show is A+, and the animation is incredible and hysterical in a blink-and-you’ll-miss-it way.

My favorite moment of the show is so small and perfect: when Mr. PeanutButter picks Diane and Bojack up from the airport and opens the trunk. A bunch of tennis balls spill out and he wags his tail and goes “Hey!” But it’s really quiet and in the background of the dialogue, so I didn’t even catch it till the third time. But he’s a dog so of course his trunk is full of tennis balls, and he’s so excited about it like it’s a new discovery even though who else would have put them there? Dumb dog. (I love you, Mr. PeanutButter.)

As the episodes accumulate, Bojack does something rare for a cartoon: it doesn’t reset. Each episode builds off the events of the last, in a way that gives the show a forward momentum it’d be missing if this was any other animated series (or, um, Louie). There are consequences for Bojack’s misbehavior, and the people he alienates stay alienated. The show tackles Big Issues, like what it means to be a good person vs wanting people to see you as a good person vs wanting to be seen, period. It’s about the roads not taken. It’s about the toll of success. It’s about thinking there will always be Later. It’s about Death. So maybe, given that high bar, Bojack Horseman shouldn’t have to be the funniest show on television. The problem is, it definitely could have been. 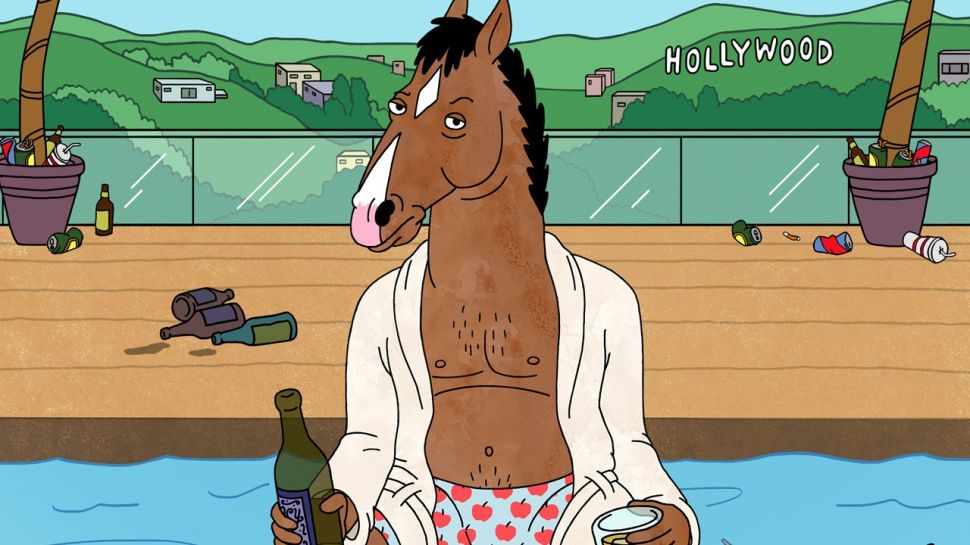