Rent the Runway, the startup that dishes out designer dresses like Netflix DVDs, has tapped into a real need among young women — and their business is growing exponentially.

The five-year-old company will move into a warehouse four times the size of its current digs later this year, CEO Jennifer Hyman announced on CBS’s This Morning today. She also shared some truly staggering figures, such as:

• RTR operates the country’s largest dry-cleaning facility. This enables them to keep costs down.

• The average dress will be worn by 30 customers.

In the age of Instagram and Facebook, it’s no wonder women are lapping up what Rent the Runway has to offer. Gone are the days of sneakily wearing the same dress to two weddings in a row on different sides of the family; now, there’s a digital record that you’re an outfit-repeater.

One might think that Ms. Hyman’s business is hurting high-end designers’ bottom lines. But she says the designers whose dresses she sells — think Opening Ceremony, Badgley Mischka, Calvin Klein — don’t view her as competition. Instead, RTR is “introducing a demographic of women who were not entering department stores… They come to me and start renting these two-thousand-dollar dresses and develop an affinity.

Anyone who’s used RTR can attest to that. And it’s nice to see someone making the fashion startup thing work — you can’t swing a rented Kate Spade clutch these days without knocking over 10 wannabe ecommerce startups these days. 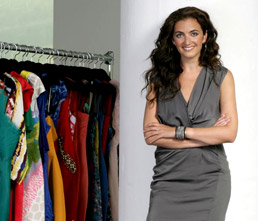