The Kathe Donovan Campaign got tough in Bergen County this morning, looking to smother their Democratic challengers in Donovan’s first TV ad of the season.

The Republican county executive seeking her second term in office, Donovan bought $45,000 worth of cable and Internet ad time in an attempt to snuff out challenger James Tedesco, a county freeholder and former Paramus mayor.

The ad highlights Tedesco’s long-ago choice for Paramus attorney, Dennis Oury – who was later tried and convicted for attempting to profit from a secret business venture; and pokes at Tedesco’s running mates.

You can watch Donovan’s ad here.

Sources describe the ad as a “run like you’re behind” statement of aggression, even though most people watching the race see Donovan – a countywide name for two decades – as the favorite heading toward Nov. 4th.

Democrats hearing about the ad voiced tentative pleasure at the Republican incumbent’s choice to go negative, seeing it as a signal that they’ve touched a nerve.

Not so, according to Donovan Campaign Spokesman Joe Orlando.

“The only thing negative is the record of Tedesco, Ganz and Voss,” Orlando said.

Donovan’s ad targets not only Tedesco, but incumbent Democratic freeholders David Ganz and Joan Voss in a calculated attempt to knock out all three Democrats in one ad, GOP sources say.

The ad also muddies the Democratic field by refusing to fasten on Tedesco alone and contribute to increasing his name ID as Donovan’s solitary opponent.

Mike Pagan, spokesman for Tedesco, Ganz and Voss, issued a statement in response to the ad.

“Kathe Donovan is running a cookie cutter campaign designed to hide her complete failure as county executive over the past four years,” Pagan said. “Because Donovan can’t run on her record, she is relying on a misleading, negative attack ad straight out of the Republican playbook.  Her administration and those closest to her are the subject of four federal and state investigations so we are not surprised by this preemptive, misleading attack that distorts the truth in an effort to minimize her administration’s massive ethical failures.

“After cutting $6.5 million dollars in education funding including $500,000 for special needs children and cutting veterans services by 50 percent and workforce development by 90 percent, Donovan handed out patronage and no-show jobs,” the spokesman added. “It’s no wonder she is running a negative campaign.” 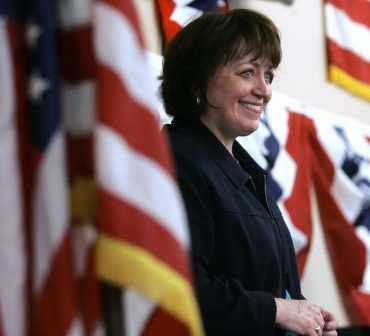