James Franco again, more subdued and less hokey than usual, this time in something called Good People, the kind of routine thriller they used to show on Thursday and Friday nights before the big Saturday double features, back in the good old studio years when the marquees changed every two days.

Directed by Henrik Ruben Genz, a Danish director about which nothing important has been heard for obvious reasons, and written by Kelly Masterson, who impressed earlier this summer with the script for the surprise Korean hit Snowpiercer, this violent but strangely benign potboiler is about a young, financially strapped American couple named Tom and Anna Wright (Mr. Franco and Kate Hudson) who are renovating a house they inherited in London. They took out a loan to float their dream of building a real home together and starting a family. But their budget has dried up and the future looks grim when suddenly they discover the corpse of their downstairs neighbor who has stashed away a leather bag containing 200,000 pounds in the basement ceiling. It’s drug money, of course, and a crafty, soft-spoken British detective (Tom Wilkinson) has his suspicions, but when Tom and Anna report the body they neglect to mention the money. They’re good people, suddenly faced with a moral dilemma.

“We spent our whole lives being good, and what has it gotten us?” asks Tom. “Nothing. So maybe this money is a gift—to help us get our lives back on track.” Anna’s not so sure. “We don’t know where this money comes from. It could be really bad money.” She doesn’t know the half of it. The ambitious detective stalks them. A vicious gang of heroin dealers wants the money back. Tom makes the mistake of spending some of it to pay the mortgage and some credit card bills. Not much, but enough to be traced to the bank. And Anna, who has been trying to get pregnant, spends some of it on a fertility clinic. They’re good people, all right—but pretty stupid.

Killers come out of the woodwork and bodies splatter all over the walls. The Big Kahuna is a French gangster called Khan (Omar Sy) with a talent for ruthless torture and enough ties to corrupt cops in Scotland Yard that he can never get caught. Tom and Anna’s only hope is to help the detective who wants to use them as bait or go to prison for spending the stolen loot. It’s all rather simplistic, but well plotted enough to hold interest. The suspense, minimal at best, centers on whether the good people can defeat the bad people, and how long it will take. Meanwhile, we’re treated to many savage beatings, people thrown from balconies and burned to death in a fire, a gun held to a baby’s head, nail guns firing spikes through a man’s two feet, a pool cue smashing a ball through an open mouth, dead people who keep coming back to life at the most unexpected moments, and enough unconvincing escapes from the jaws of death to keep James Franco and Kate Hudson alive for 90 minutes. But that is not an endorsement. 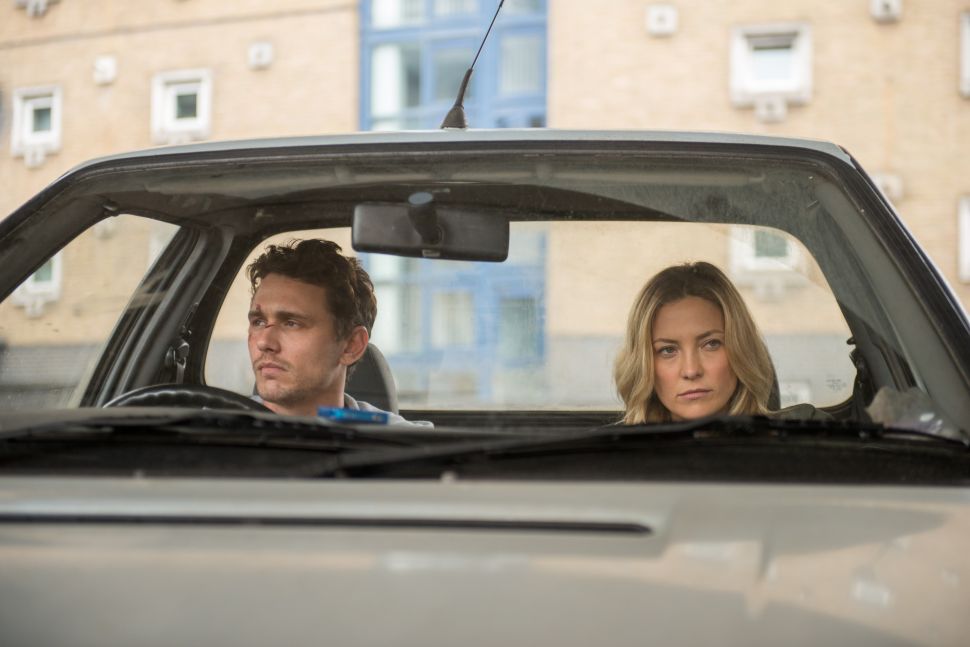