Lydia Pilgrim worked as a paid petitioner for the campaign of Latrice Walker, a front-running candidate for a vacant Brooklyn Assembly seat. A month later, Ms. Pilgrim was paid $5,500 to help steer an independent expenditure on behalf of Ms. Walker.

Gus Christensen, an investment banker also seeking an Assembly seat, won the presidency of the Lenox Hill Democratic Club on the Upper East Side this year. The same club then spent more than $14,000 on an independent expenditure–a mailer to households in the district–promoting Mr. Christensen.

In each instance, the expenditures have drawn fire from rivals in the bitter Democratic primaries that will be decided tomorrow. And in each instance, legal experts said both expenditures are still likely legal–not that the New York State Board of Elections has a history of cracking down on law-breaking campaigns, anyway.

“On it’s face, it’s not illegal. I can see why it would raise questions, though,” said Sarah Steiner, an election lawyer, speaking of Ms. Walker’s case.

Records show that Ms. Walker, running for a Brownsville, Brooklyn seat that once belonged to convicted ex-Assemblyman William Boyland Jr., paid Ms. Pilgrim a total of $940 in June and July to petition for her. In late August, the Transportation Workers Union ran an independent expenditure in support of Ms. Walker, who is running with the backing of elected officials like Congressman Hakeem Jeffries and Public Advocate Letitia James. The person who was paid to steer the expenditure was the same Ms. Pilgrim, according to a BOE filing.

A rival to Ms. Walker privately fumed, pointing out that the independent expenditure–which bars any type of coordination between the people running the expenditure and a campaign–could have hardly been independent if a former canvasser for Ms. Walker, potentially holding crucial information about Ms. Walker’s campaign, used her knowledge to steer an expenditure benefiting her old boss.

To actually coordinate–and break the law–a person needs to “make [his or her] expenditure by arrangement with the campaign. The campaign has to know you’re doing it and be involved in your doing it. And you have to be involved in making it the way the campaign wants it to be,” Ms. Steiner explained.

A spokesman for the BOE, which Ms. Steiner said recently created an enforcement council to examine independent expenditures, said he could not comment on individual cases. But a source close to Ms. Walker aggressively defended her campaign’s practices.

“She was no longer doing shifts and no longer on payroll. She went to work for TWU. It’s her business as a private citizen,” the source said. “In no way was she working for two of the entities at the same time. There can’t be any coordination.”

On the tony Upper East Side and Roosevelt Island, where Mr. Christensen is battling three other candidates, charges have long been flying about the nature of the Democratic club Mr. Christensen now runs. Rivals fumed in a Daily News story earlier this year that Mr. Christensen illicitly “bought” support at the Lenox Hill Democratic Club so he could elect himself president.

As president, Mr. Christensen voted for the club to spend money on behalf of his race and various candidates running to be judicial delegates and serve on the state committee. The club’s independent expenditure cost $14,576, according to Board of Election records. Since Mr. Christensen is the president of a club that spent money independently on behalf of his own campaign, at least one opponent is crying foul.

“There’s a disturbing trend developing here. First Gus buys the presidency of the Lenox Hill Democratic Club by paying for over 150 memberships for his friends; now he’s using that position and the club’s resources to further his political ambitions,” said Robert John Jordan, the campaign manager for Rebecca Seawright. “If the way you run a campaign says something about the kind of elected official you’ll be, then it certainly looks like Gus would be more of the same in Albany — certainly not someone who’s going to work for the reform we so obviously need.”

As in the case of Ms. Walker, a seemingly obvious show of coordination does not necessarily equate to illegality. The consultant who designed the mailer, BrownMillerGroup, is different than Mr. Christensen’s consultant, Mercury Public Affairs.

“It sounds kosher to me,” said Jerry Goldfeder, an election lawyer.

The member of the club who steered the independent expenditure also claimed Mr. Christensen had nothing to do with it.

“He’s just a member of club. He doesn’t dictate things as president. I guess people can spin things however they want,” said John Halebian, a local Democratic district leader and member of the club’s executive committee. “We collected money without Gus and decided to spend some of it. It wasn’t his idea.” Mr. Halebian added that the president is more of a ceremonial position in the club, like the “chairman of the board.”

A spokesman for Mr. Christensen blasted Ms. Seawright for appearing on a mailer for the East Side Democratic Club with Assemblyman Micah Kellner, the lawmaker currently representing the district. Mr. Kellner lost clout in the district and in Albany after he admitted last year to having what he called an “inappropriate” relationship with a former staffer. (He is not seeking re-election to his Assembly seat and is now running for the state committee.)

The East Side Democratic Club’s mailer, Mr. Christensen’s camp pointed out, was never registered as an independent expenditure with the BOE.

“Either Rebecca Seawright ain’t the sharpest tool in the shed, or she’s deliberately trying to mislead and distract voters from the fact that her campaign and political club are in blatant violation of campaign finance laws,” said the spokesman, Austin Finan. “Either way you slice it, she’s proving yet again that she’s unqualified to hold elected office.”

Ms. Seawright’s campaign shot back that she had no input or involvement with the mailer because it’s an independent expenditure. 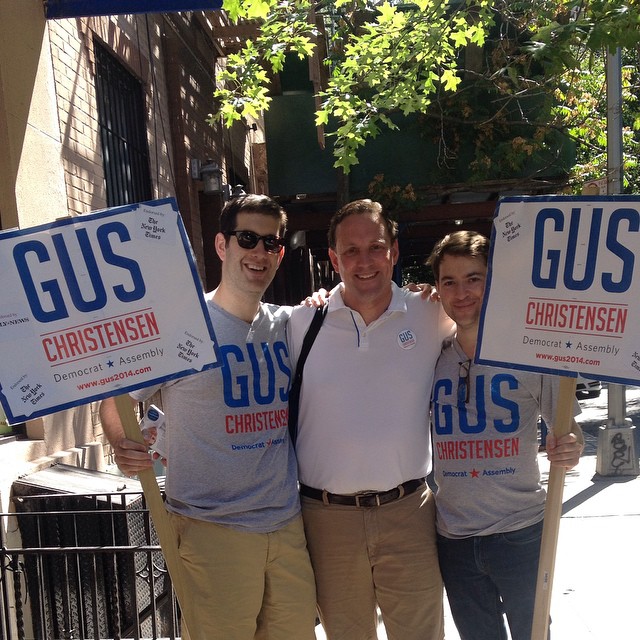