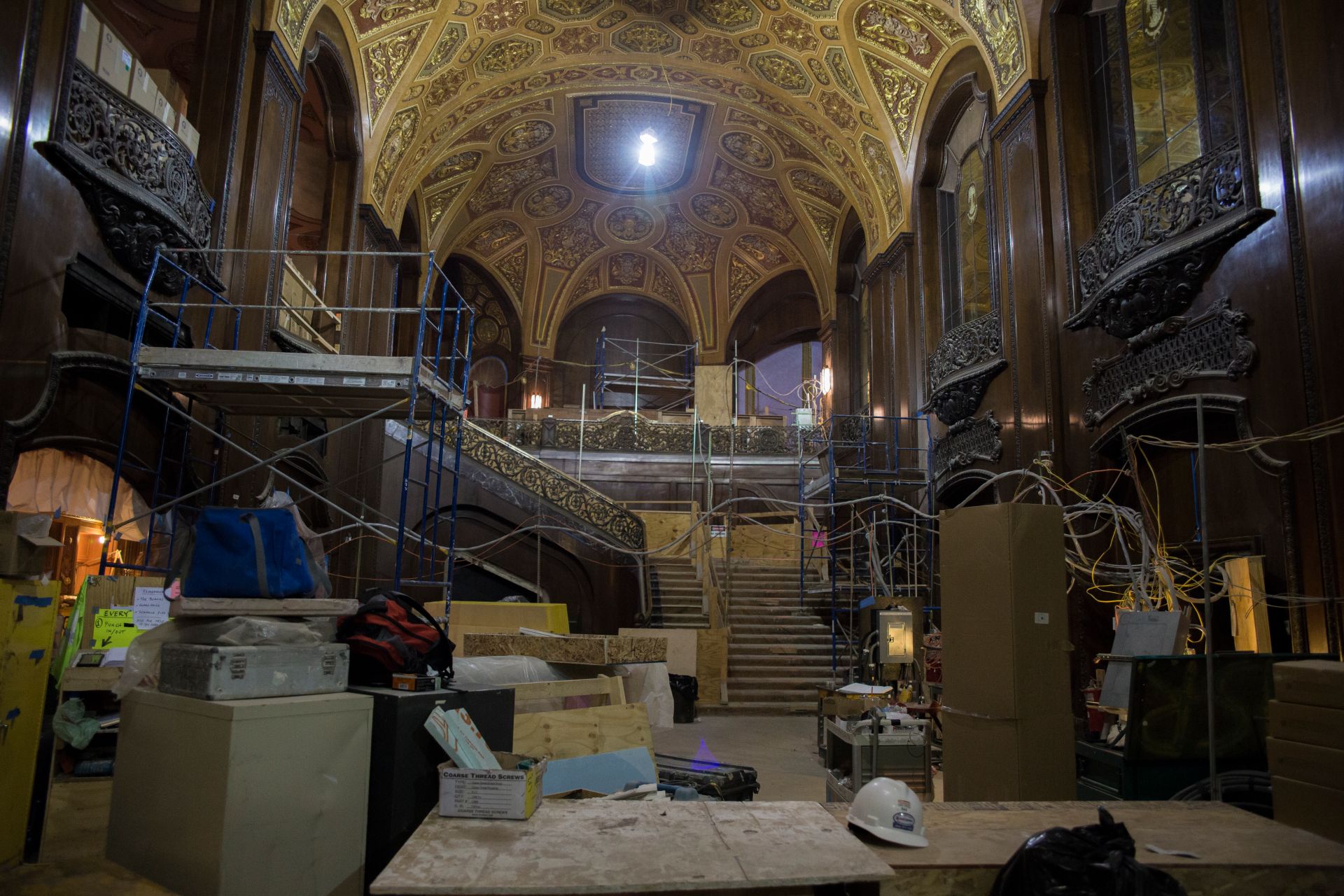 The lobby of Kings, still a construction zone. First workers stabilized the structure, then they focused on drying it out. Aesthetics have been the recent issue. (Nicholas Perrone, the Observer)
kvelseyobserver 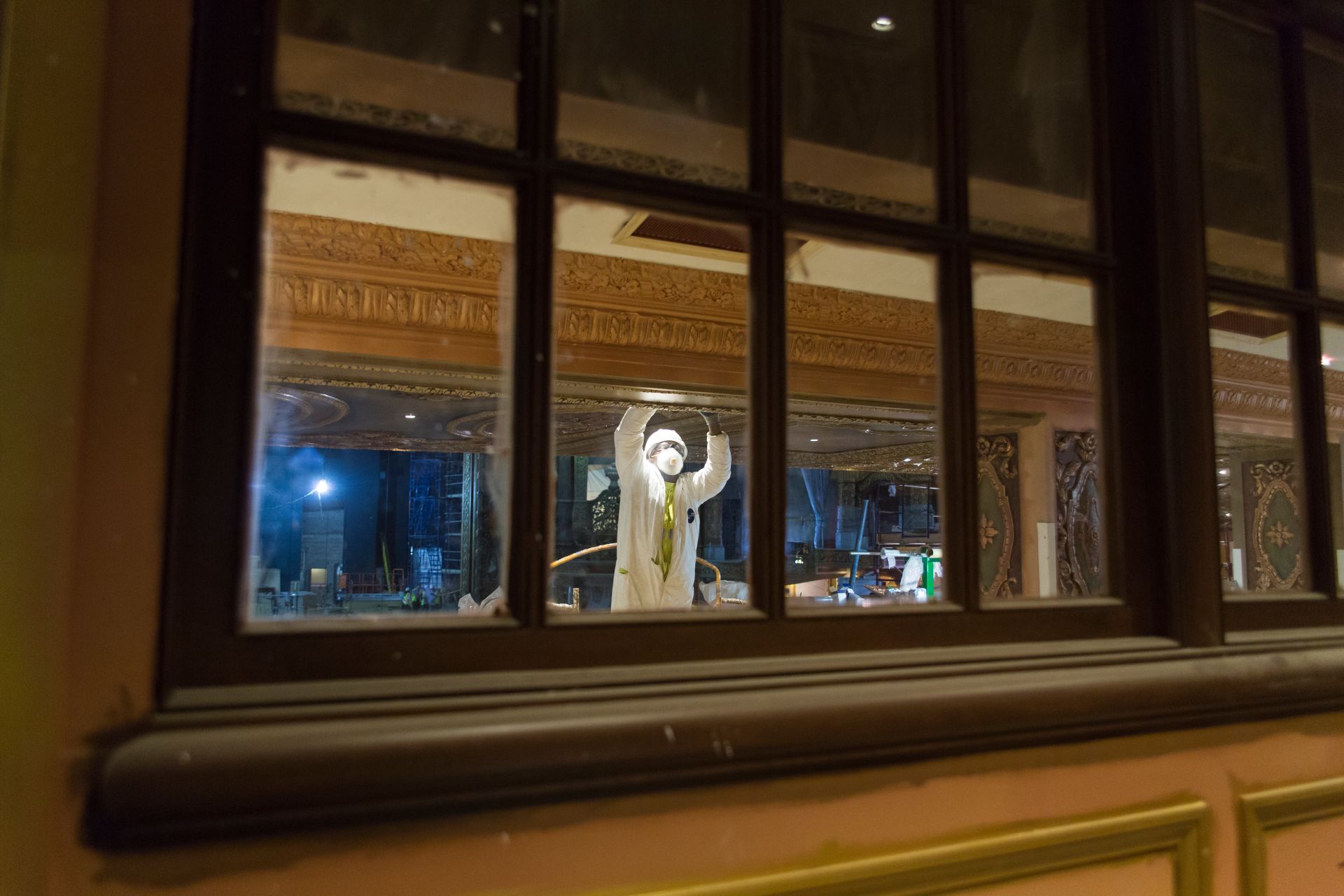 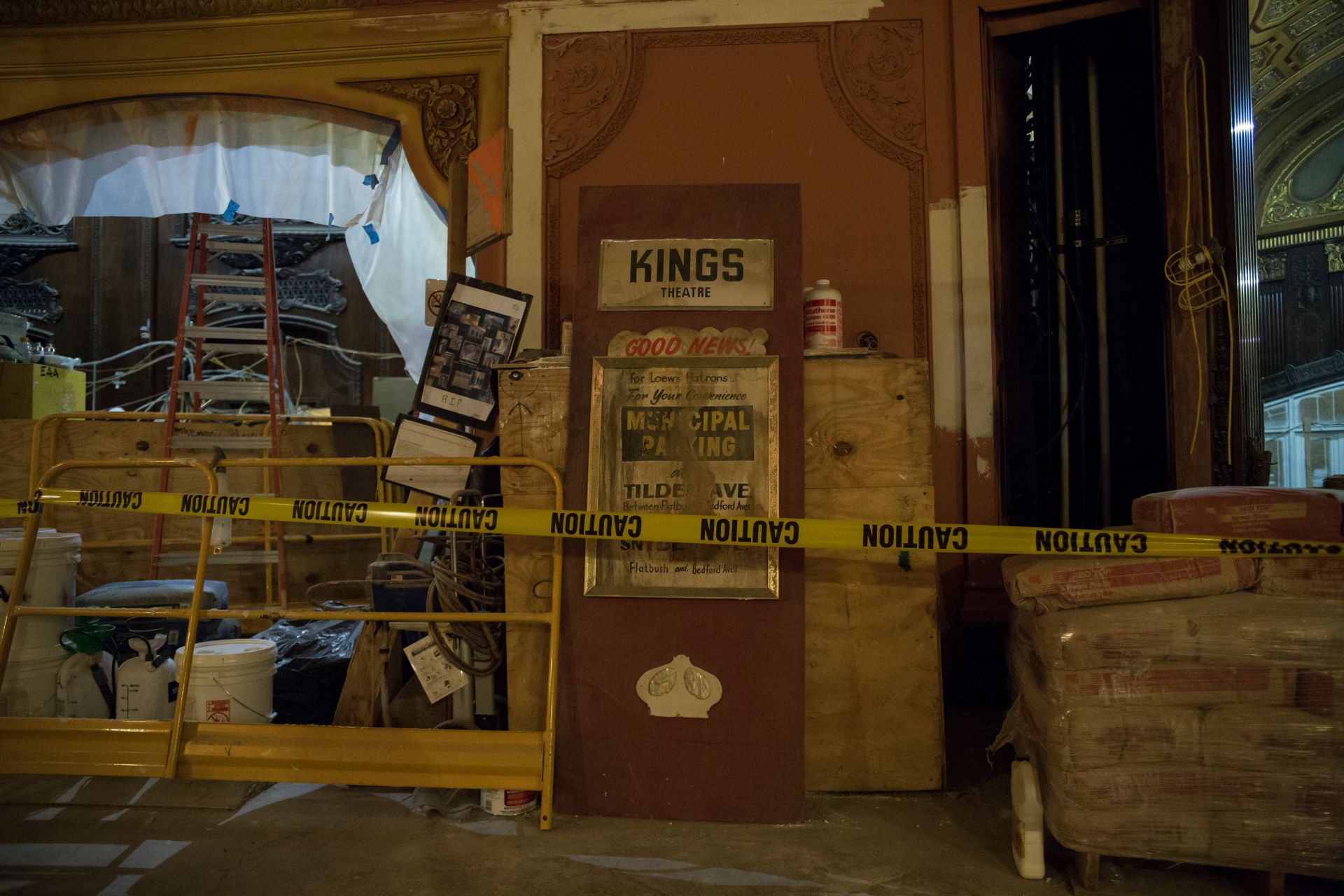 An artifact from an earlier era of the theater. (Nicholas Perrone, the Observer)
kvelseyobserver 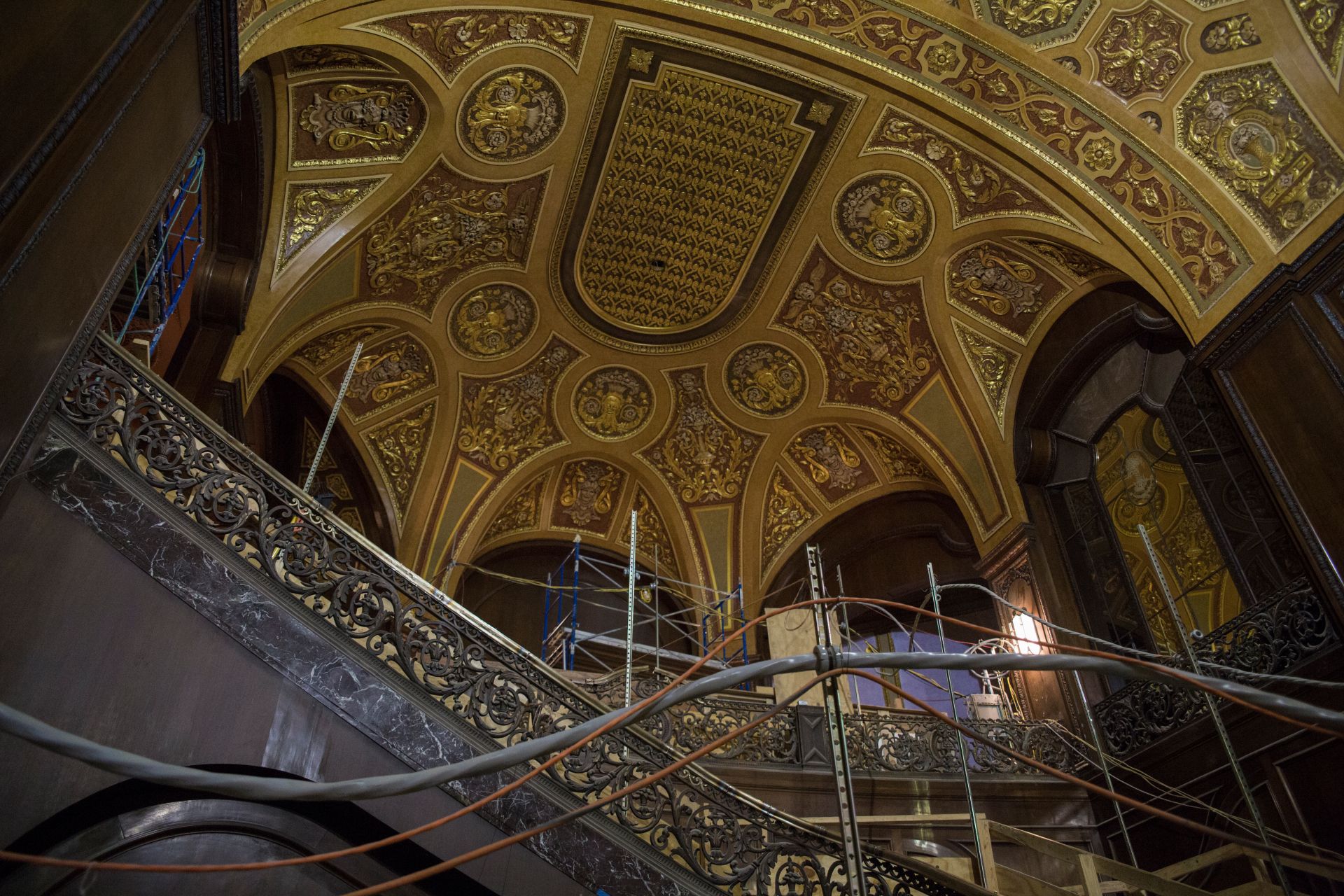 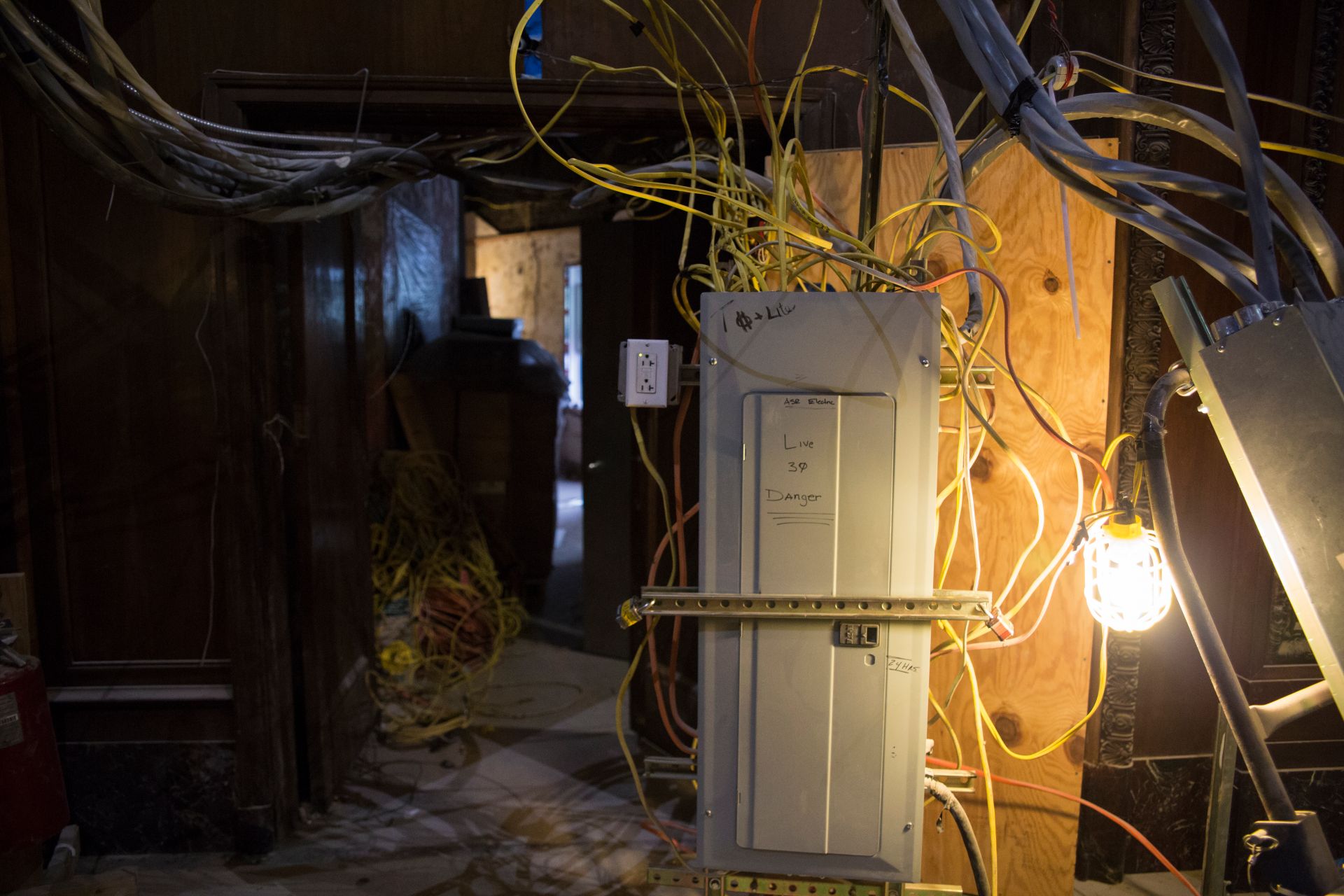 The entrance to the men's smoking lounge, one of the areas that is still awaiting repair. (Nicholas Perrone, the Observer)
kvelseyobserver 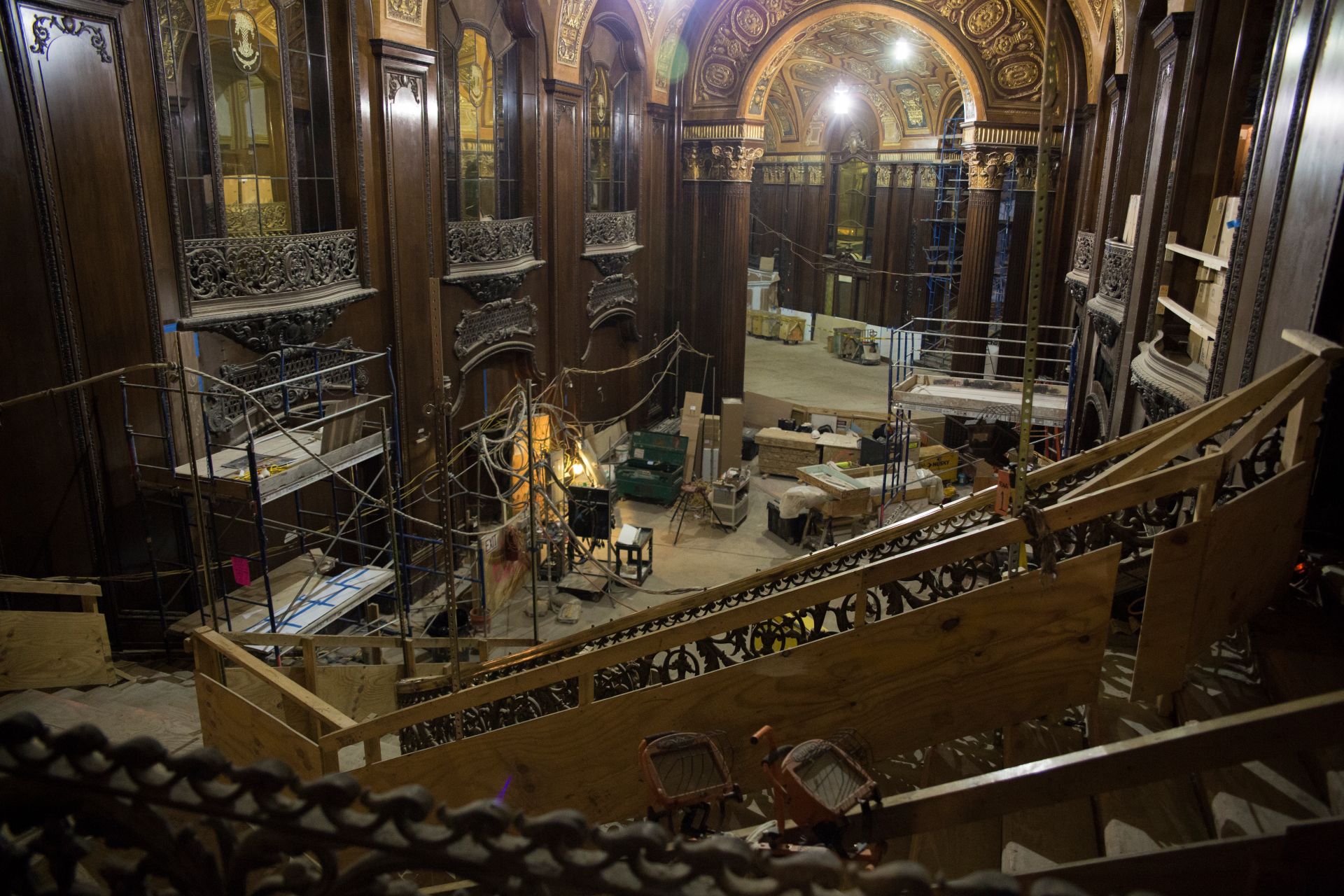 The original architects designed the theater to look old even when it was new. (Nicholas Perrone, the Observer)
kvelseyobserver 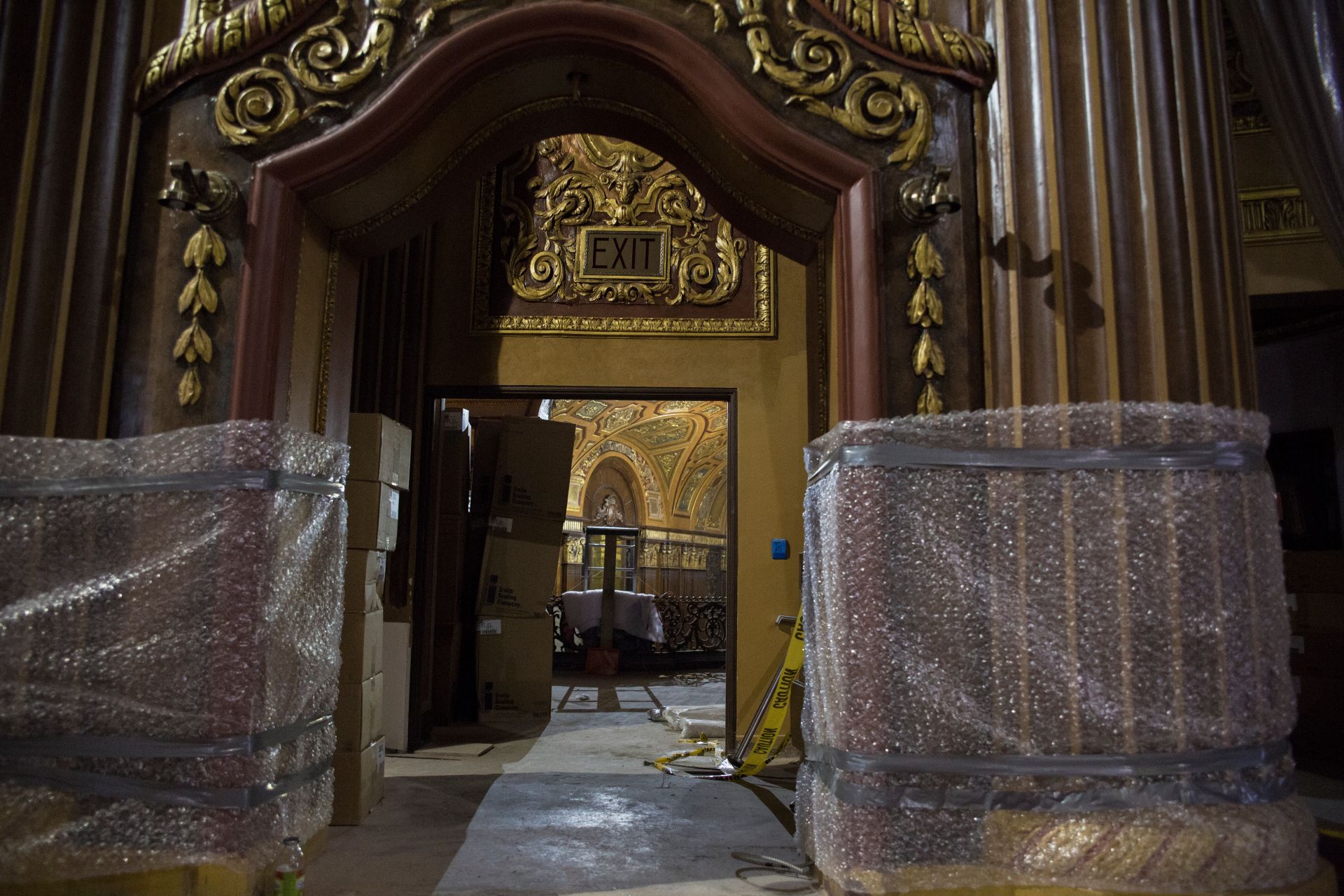 In cases where wood needed to be replaced, workers not only matched the variety—American walnut—but also the grain. (Nicholas Perrone, the Observer)
kvelseyobserver
Advertisement 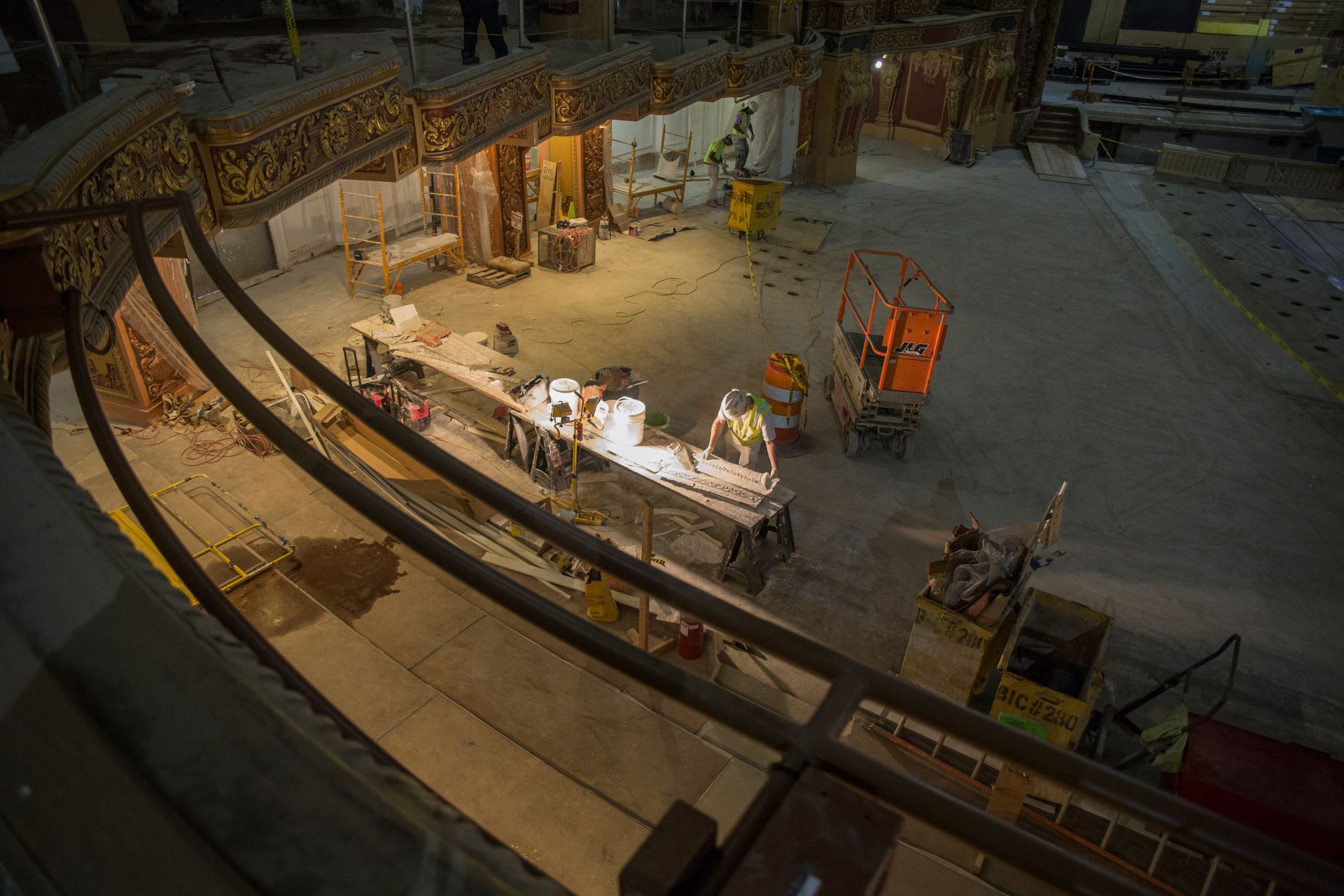 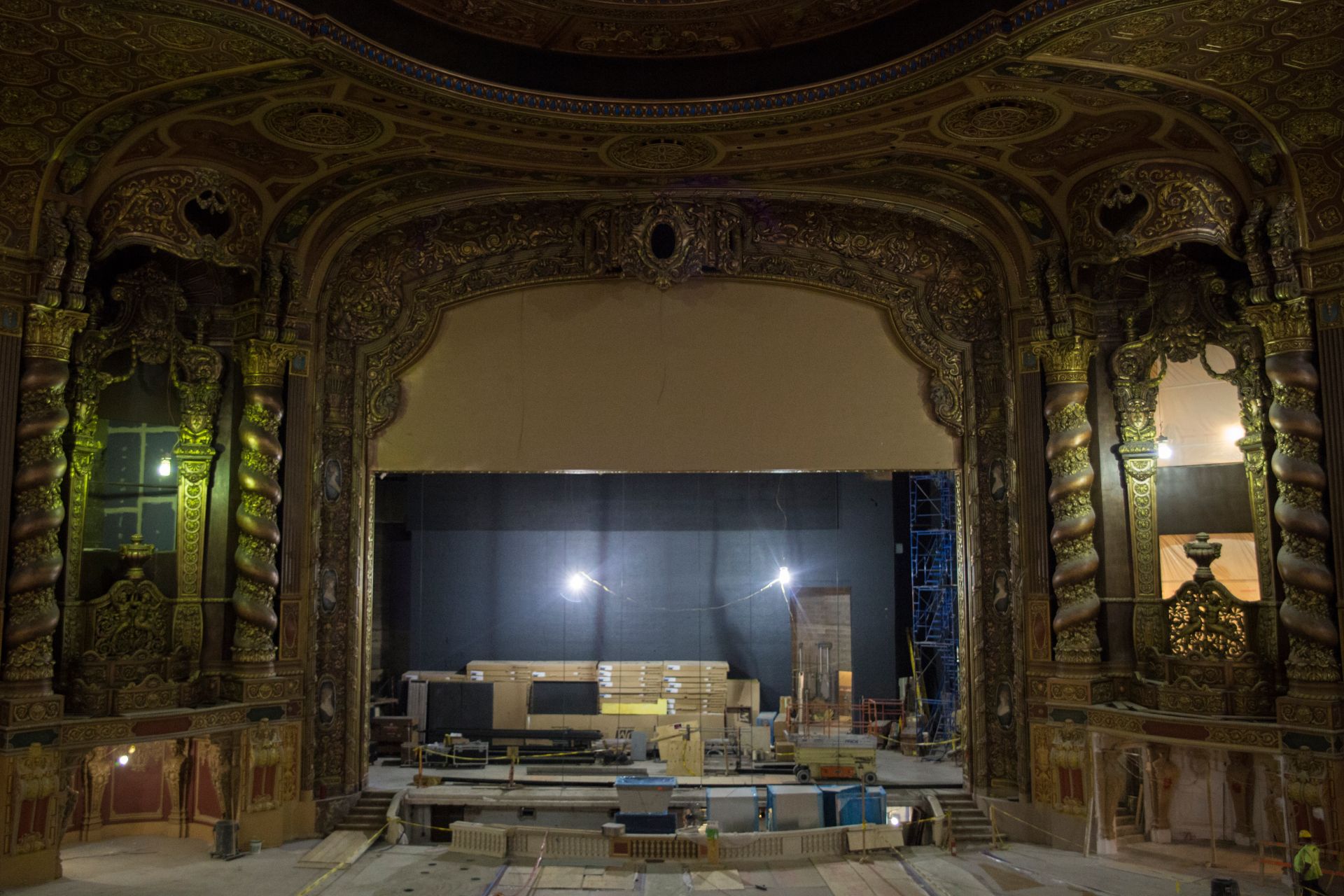 The stage is 32 feet deep—as large or larger than most Broadway theaters.
kvelseyobserver 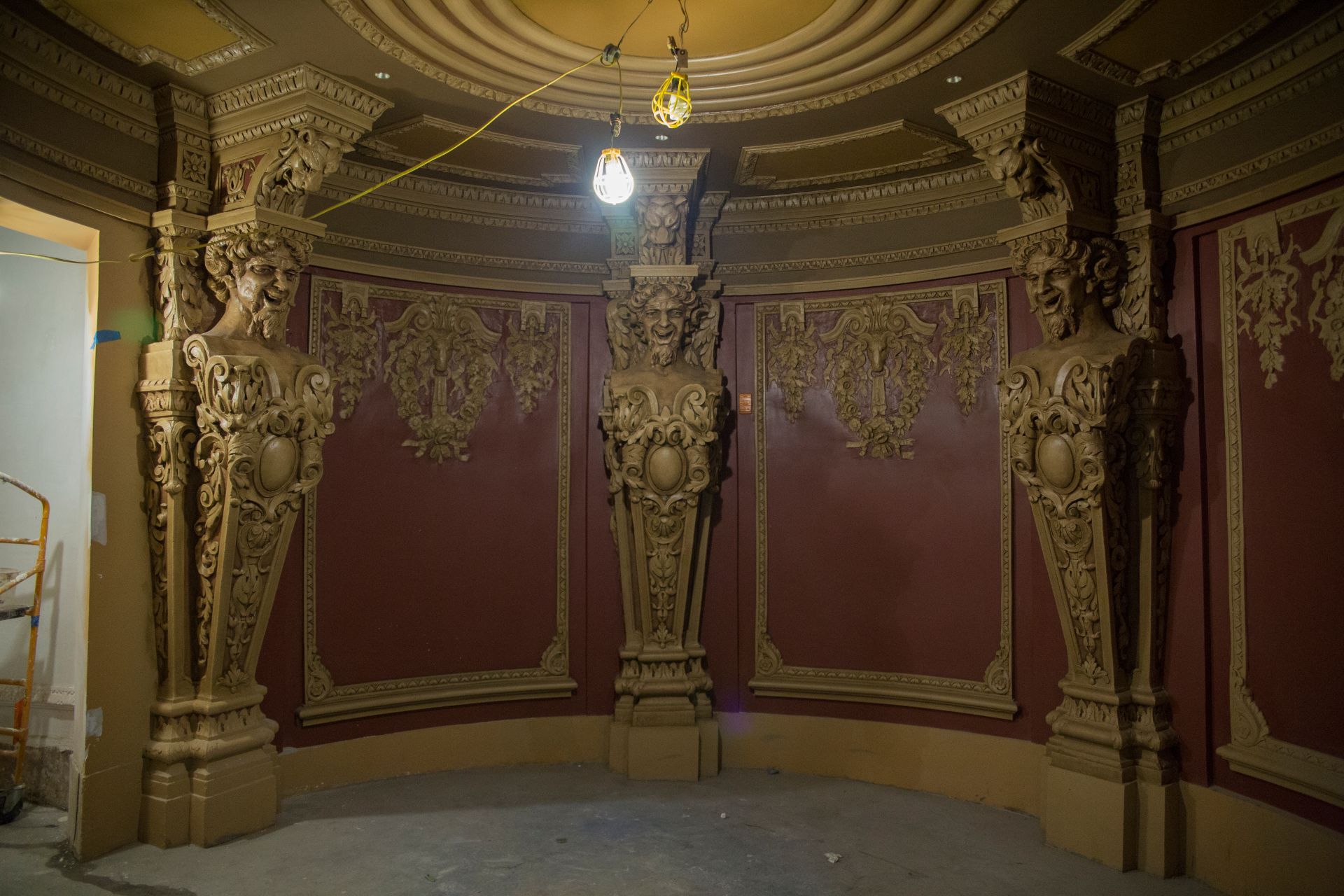 Whereas many movie palaces have repeating ornaments and moldings, they're extraordinarily varied in Kings. (Nicholas Perrone, the Observer)
kvelseyobserver
Advertisement 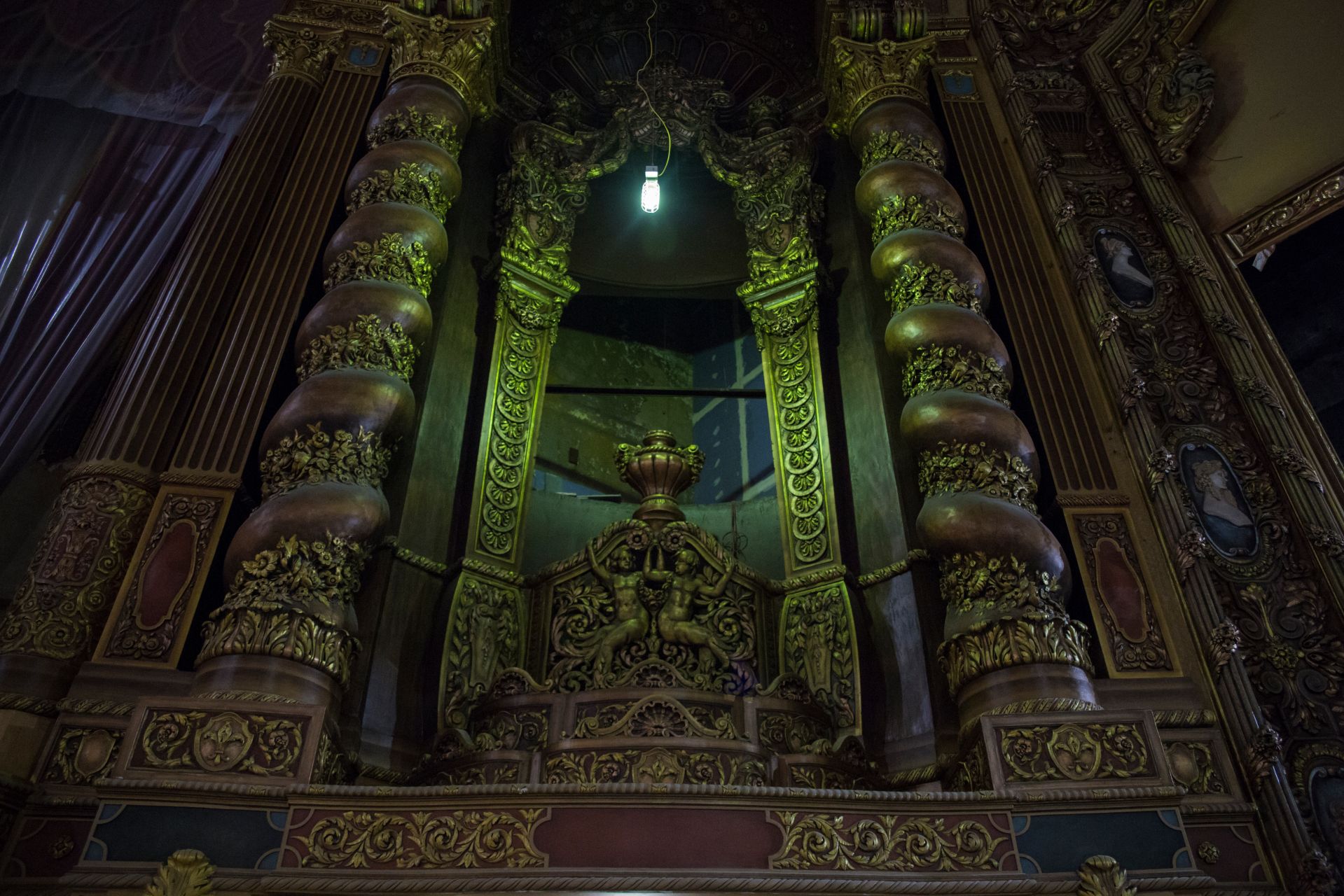 Permanent lighting has yet to be installed. Carpets are also lying in wait. (Nicholas Perrone, the Observer)
kvelseyobserver 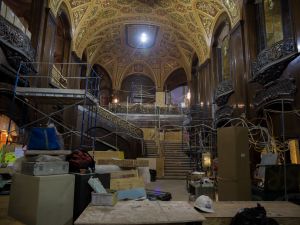 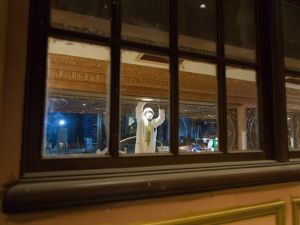 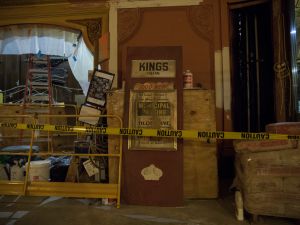 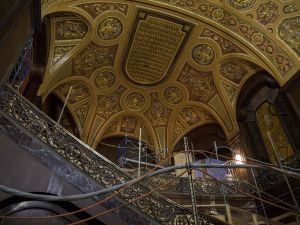 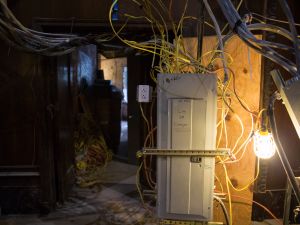 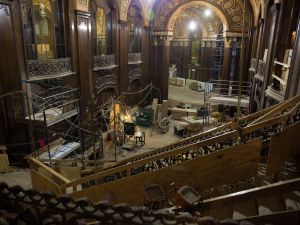 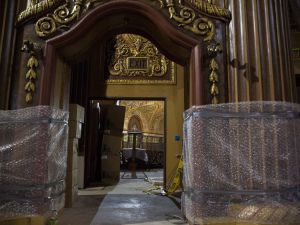 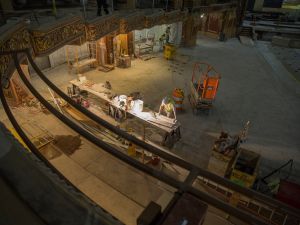 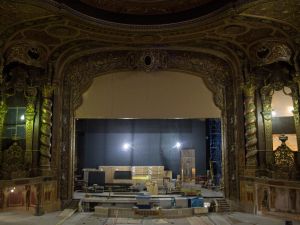 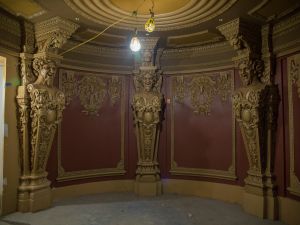 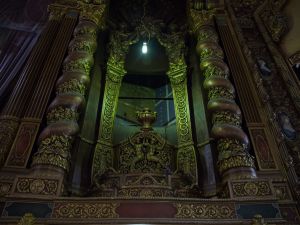 The plywood-sheathed entrance to the Kings Theater lies on an unassuming stretch of Flatbush Avenue, nestled among 99-cent stores, T-mobile shops and pizzerias, an extravagant remnant of an era in which Brooklyn was a destination unto itself rather than a satellite of Manhattan.

And so it is again.

Kings Theater, likewise, is in the final stages of a similar transformation. A former vaudeville and movie house shuttered in 1977—in the intervening four decades, vandals and thieves making off with most of the decorative elements that were not destroyed by leaks—Kings is poised to open again this January as a venue for the performing arts.

Few of New York’s movie palaces survived the decades intact; Kings will not only be the rare exception when its restoration, led by Martinez & Johnson Architects, is complete, but arguably, the most glorious. One of five Loew’s ‘Wonder Theaters’ built in New York and New Jersey, Kings, Kings opened with Evangeline, starring Dolores del Rio, in 1929.

On Tuesday afternoon, the Observer toured the vast theater, which with approximately 3,200 seats, is the largest in Brooklyn and the third largest in the city—behind only Radio City Music Hall and the theater at Madison Square Garden. Kings dates to the same era as Radio City, but the two theaters could hardly be more different, with Radio City an Art Deco masterpiece and Kings an old-fashioned fantasia of gilded medallions, elaborately swirled iron staircases, lavish American walnut paneling, thick red velvet curtains, spiral columns and fanciful faces. Designed by architecture firm Rapp & Rapp, Kings’ interiors were inspired by Palace of Versailles and the Paris Opera House.

“I’d guess there were more than 50 different types of faces. We keep finding them as we’re cleaning and working. All of a sudden you say, oh, there’s something starring back at me!” exclaimed Jeff Greene, the president of EverGreen Architectural Arts, the firm that is restoring the detailed decorative work in the theater.

Among the many faces we spotted were those of cherubim, goat-faced demons, flirtatious maidens, stately Georgian beauties in raised profile and (we think) mermaids.

The $94 million restoration is being overseen by a consortium led by ACE Theatrical Group—which will manage the running of the theater—the Goldman Sachs Urban Investment Group and the National Development Council, and paid for with a mix of public and private funds ($51.5 million is coming from public sources). The city will retain ownership of the theater, but ACE has a 55 year lease with the Economic Development Council.

“It was really a forensic investigation—we had to find out how the building was built in the first place before we could figure out how to reconstruct it,” said Mr. Greene.

The theater’s renovation has not only been an act of meticulous restoration, but also reproduction—thieves stole everything from the mantels and iron banisters to the copper piping—and craftsman working on the restoration have gone so far as to not only match the variety of wood where had irreparably damaged the fluted columns and opulent walnut paneling, but also the grain.

The main chandeliers, fortunately, were not stolen and have been restored, “mainly because no one could reach them,” said architect Gary Martinez. It no doubt helped that each chandelier  weighs approximately 2,000 pounds.

Even some of the theater’s original furniture is making a reappearance: Mr. Martinez said that when the restoration began, an elderly woman stopped by and told that she had 15 pieces of the original furniture—she had been given it as one of the last floor managers working when the theater closed. The restored furnishing will sit in the lobby.

Some things of course, will change: the building has been enlarged in the back to accommodate a larger stagehouse for modern theatrical productions, the basement has been expanded to fit the bathrooms that modern theater-goers demand, alcohol will be served (as it was not during the theater’s first few years), and the seating’s sloping has been changed to allow for better sight-lines necessary for live performances. (The gentlemen’s smoking lounge will also be repurposed.)

These days Brooklyn’s entertainments are also much different than they were in 1929, with the growing BAM campus and, of course, Barclay’s. But not all venues are created equal and despite the wires overhead, plywood underfoot and fine coating of gypsum dust everywhere, there was something in King’s glimmering, gilded, mirrored space that made us feel that having to spend a lot of time indoors this winter might not be all bad.