The night before I was to meet with the artist James Nares, I ran into another artist represented by Paul Kasmin Gallery, Walton Ford. Without prompting, he offered up a little anecdote that, in retrospect, sums up his fellow artist very neatly. Mr. Nares seems like this mild mannered, pleasant man with a soft British accent, Mr. Ford said, but the first time he got into a car with him, he drove like a complete maniac.

“I try not to drive so fast, but my car goes like a rocket,” Mr. Nares said, laughing, when I relayed the story the next day. “I love leaving Porsches in the dust.”

We were standing in the middle of the Paul Kasmin space at 293 Tenth Avenue looking at his new show, “High Speed Drawings,” which opens Wednesday and is on view until October 25th. If it wasn’t clear from the title, the tone of the show is certainly connected to his blitzkrieg tendencies on the highway. The bracing and beautiful paintings, with their flickering lines racing up and down the canvas, or horizontally, one side to the other, certainly do recall the buzzing propulsion of things zipping through the air or the rush of zooming down an empty road.

“When you think of speed, you think of a horizontal speed, like driving, or a train,” he said, walking through the gallery, admiring his newly hung works. “Like the British rail—I’ve always enjoyed looking out the window on the train, things passing by.”

We were in the room of the horizontally conceived drawings, and then Mr. Nares jumped back to the other room, where hanging on the walls were the other set of paintings, where the sputtering streaks go from top to bottom.

“And then there’s the vertical speed—like falling out a window.”

The work brings to mind another of Mr. Nares’ works, the 61-minute-long film “STREET,” a glossy high-resolution slow-motion depiction of New Yorkers going about their day in the city set in slow-motion, the action crawling by at the pace of snow melt. He filmed it by sticking a camera in the trunk of an SUV—again with the cars—that was going up and down Manhattan, never faster than 40 miles per hour.

“It is a visual accompaniment to ‘STREET,’ as it’s also in this lateral mode, always going in the same direction,” he said. “But also, it’s kind of the opposite, because the thing is moving, and I’m standing still.”

“Street” is no longer on view at the Met, where it had its New York premiere last year, but we had the pleasure of watching it with Mr. Nares earlier this year in Istanbul, during the IST. Festival. He was there to speak on a panel about the work, and we met at a traditional Turkish dinner held later that night, as the sunset glistened in reflection on the Bosporus River. We talked about the film, and how its reverence for the mundane, the random things people do while walking to and from places in the city—all set to a long droning soundtrack by Thurston Moore—made us a little homesick for New York.

And then, months later, we ended up back in Chelsea. Mr. Ford was spot on about the mild-mannered charm—Mr. Nares was rocking the silvery floppy hair, loose jeans, prim glasses and black Tevas of the laid-back British uncle we never had. He doesn’t drink anymore, and as a result has a lot to say about the mineralogy and carbonation levels of his beloved San Pellegrino. It’s almost enough to make one forget that, in the late 1970s and early 1980s, Mr. Nares ran with No Wave legends James Chance (who had Mr. Nares play guitar in the Contortions) Lydia Lunch, Jim Jarmusch and John Lurie. He made one of that movement’s seminal artifacts with Rome ’78 which featured many of those No Wave heroes. He became better known for his large-brush abstract paintings, but the rarely screened Rome ’78 in, to many, an important touchstone.

For this recent series of such paintings, Mr. Nares rigged together a large cylindrical contraption, where he could tape the paper to the revolving drum and paint the lines as it slowly spins. The whole process is captured in a little two-minute video that he showed me on his iPhone in the middle of the gallery. Shot by his daughter, Sasha Douglas-Nares, the short film makes it clear he revels in moonlighting as an inventor, a tinkerer, a gadget guy.

“For the brushes, I have a brush head that I drilled a hole in, then I pour ink into the bottles and screw it into a piece of fishing rod that attaches to the brush, so I don’t have to dip it in the ink, it just has a constant flow from the inside.

(Mr. Nares actually makes all of his brushes, and has a wall at his studio where he hangs them all up. Many of them are so festooned with feathers and twisted into odd angles they look like something in a Dr. Seuss book. Glenn O’Brien told Mr. Nares that he should have a show that’s just his brushes, and he’s correct.)

We walked back into the other room, to the vertical paintings, one of which is stuffed with the most vibrant strange colors that when you look at it for a while and then glance at a black and white work, an optical illusion makes pigment seem to appear.

“It does remind me of the millions of colors on your computer screen, and it has the flatness,” Mr. Nares said.

“That’s right,” he said, laughing, “But, really, when I look at them, I feel the speed, and it’s pleasurable.”

He paused for a second, and sighed while maintaining his mild-mannered composure.

“I have to stop driving so fast.” 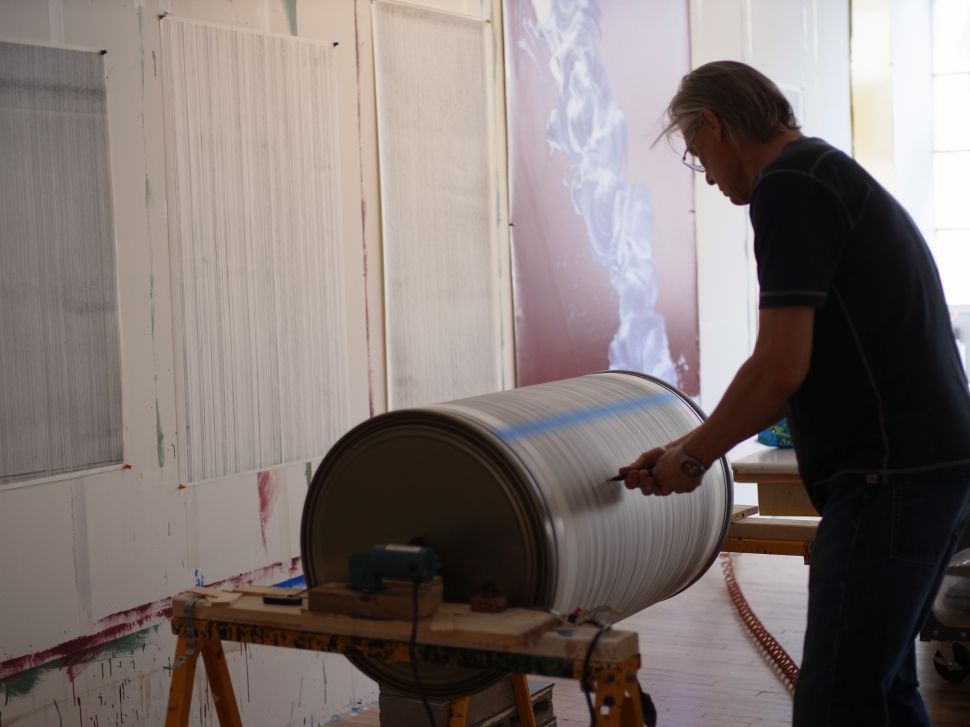