Figurative painter/demigod John Currin sat down with president and CEO of the J. Paul Getty Trust James Cuno in Los Angeles yesterday (9/14) to talk about how traditional portraiture has influenced Currin’s interpretation of the form.

Currin, a Gagosian artist, variously discussed spanking, his first visit to the Getty, and who he paints for. He went through a whirlwind slideshow of his artistic influences, including Gustave Courbet (“he’s my biggest hero”), Orazio Gentileschi, as well as gave his thoughts on Norman Rockwell: “I’ve thought about his work in terms of turkeys.”

Here, his thoughts, in public and in a later chat with The Observer.

On his paintings leaving the proverbial ‘nest,’ Currin mused that he “doesn’t like to see them on white walls; I enjoy seeing them in people’s houses, with furniture, and junk around it. I don’t know if I love seeing them in a gallery…white is not a great background for oil paint.”

On the the time his painting became an S&M prop: “I was brought in to a conservator to look at a damaged painting; it was a painting of a bottom, of just a butt…there were all these radial cracks around it. It turned out someone had stayed at the collector’s house and spanked somebody with this butt painting.”

On drawing in a younger generation to view art in person: “I saw Clint Eastwood when I was a little kid in Vail, Colorado from 50 feet away and I thought, ‘Wow, that’s Clint Eastwood!’ I have the same feeling when I see paintings in person, and I hope that specialness of art will ultimately be understood. (by young people). All the paintings I showed today, I’ve known; but I’ve never been in this museum before, so to me it’s a lot like seeing Roger Moore, or Sean Connery in person. There’s the thrill of the singularity; the celebrity of the painting. But then again, there’s nothing more pathetic than trying to get kids interested in something by appealing to their enthusiasms.”

On painting for himself, or for an audience: “I paint for an audience; that’s the only honest way I can answer. I suppose I ought to say I paint for myself and myself alone, but that’s not true. (The satisfaction) comes from finishing the painting…although it’s always great when people love your work, but that finished piece is the most joyous part.” 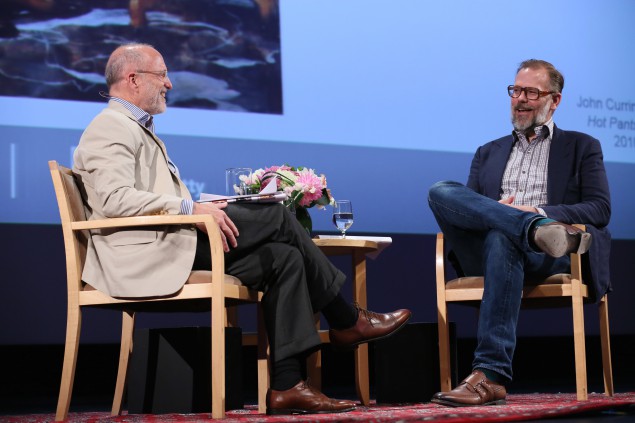