“Yes I am,” Mr. Liu shot back quickly when asked if he would emerge victorious. “I’m proud of the campaign we ran. We ran on the substance, we ran on the issues. And we certainly don’t double count endorsements.”

Mr. Liu, standing outside a public school in Floral Park, Queens, where voters and schoolchildren were trickling out this afternoon, was eying Mr. Avella’s palm card. On the long, slender piece of campaign literature, Mr. Avella stood with his arms crossed in front of the Unisphere in Flushing Meadows-Corona Park. Beneath the words “character, honor, integrity,” Mr. Avella touted the endorsements of the Queens Ledger and Queens Examiner.

“These two are one in the same. In fact, It’s actually called the Queens Ledger/Examiner,” Mr. Liu noted. (There is a separate paper in Queens called the Times Ledger that typically does not make endorsements.)

Mr. Liu then laughed. It was a reminder that the race pitting Mr. Liu, a former city comptroller and candidate for mayor last year, against Mr. Avella was an abbreviated but very bitter contest. Mr. Avella’s campaign attacked Mr. Liu for the fund-raising scandal that embroiled his mayoral campaign and convicted two aides. Mr. Avella’s palm card warned that a vote his opponent could lead down the path of “scandal, cronyism and convictions.”

In turn, Mr. Liu harangued Mr. Avella for his decision to join the Independent Democratic Conference in February, a group of breakaway Democrats that govern the State Senate with the Republican Party. Even after the IDC agreed to align next year with the mainline Democrats in a new power-sharing agreement and Mayor Bill de Blasio, a proud liberal, endorsed Mr. Avella, Mr. Liu did not let up: he repeatedly accused the senator of betraying Democrats and their values.

“The issues that the voters are voicing anger and displeasure about are exactly what we expected,” Mr. Liu said. “I fully expected that my opponent would throw a lot of mud and try to drag old, bad memories that had no substance.”

The bucolic neighborhood on the borderline of Queens and Nassau County is filled with South Asian residents, the sort of voters that Mr. Liu is hoping will propel him past Mr. Avella. Aides privately say that if the Asian vote–Mr. Liu was the city’s first Asian-American elected official–underperforms, Mr. Liu will not unseat the incumbent. Sikh and Indian volunteers fanned out for Mr. Liu, trying to rope in the few voters heading toward the voting booth. Avella volunteers also quietly stood nearby.

One man said he was voting for Mr. Liu because his son, like Mr. Liu, also attended the Bronx High School of Science. 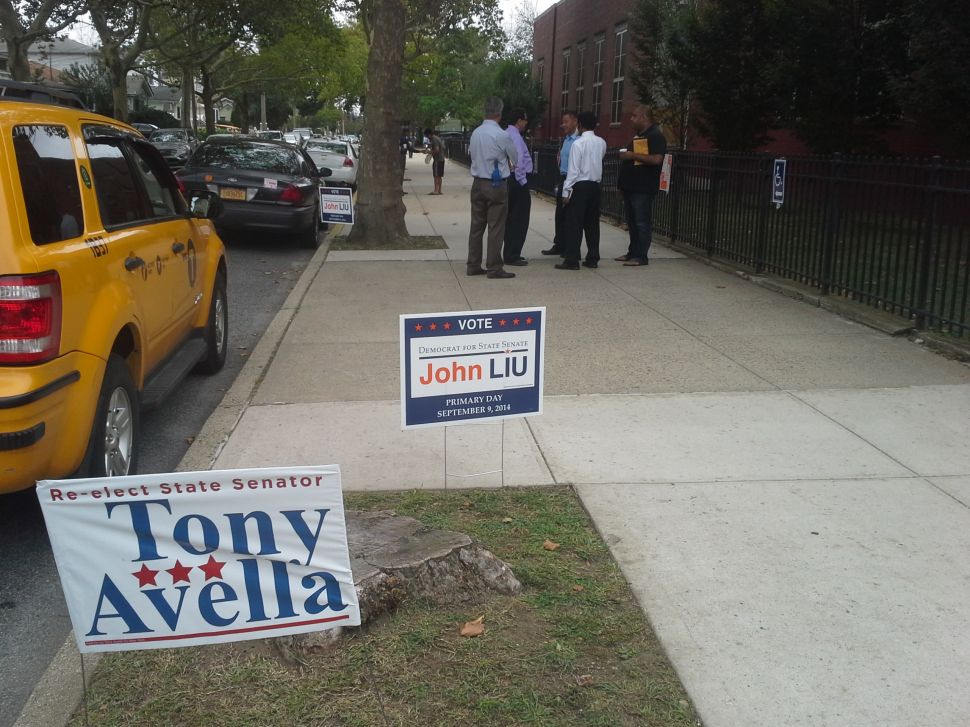