When Mayor Bill de Blasio came grinning to greet commuters on the last stop of the L train in Brooklyn, he encountered an unexpected guest.

Waiting for him this afternoon was not only Dell Smitherman, the Democratic candidate for State Senate the mayor is hoping to elect, and the many sign-wielding union members canvassing for the former 1199 SEIU operative. Standing calmly nearby, with his own band of shouting supporters, was State Senator John Sampson–the man Mr. Smitherman is trying to knock out tonight.

As Sampson volunteers threatened to drown out Smitherman supporters, Mr. de Blasio walked over to Mr. Sampson, the hulking former majority leader of the State Senate. The two Brooklyn Democrats shook hands and whispered to each other. Shortly after, the Sampson army retreated.

“I’ve known John a long time and I just said, ‘look, I think we can have a situation here where the two sides each take their own ground and, you know, [meet] the voters and not get in the way of each other,” Mr. de Blasio told reporters after the exchange. “He thought that was fair and I thought that was gentlemanly of him.”

Mr. Sampson was twice indicted on embezzlement charges and lying to FBI agents, pleading not guilty to both. Booted from his caucus, Mr. Sampson’s clout in Albany is severely diminished. But in his eastern Brooklyn district, support for Mr. Sampson is palpable and Smitherman backers privately fret that Mr. Sampson could survive, even with labor unions united to defeat the incumbent. The Brooklyn Democratic Party, ever loyal, is still in Mr. Sampson’s corner.

“Life is good,” he told the Observer. “I am a man among the people. I put people first.”

Mr. Smitherman, a first-time candidate, was perturbed–but not surprised–that Mr. Sampson crashed his big afternoon event with the mayor, who posed for pictures outside the train station like a celebrity.

He added, “This is desperation tactics.” 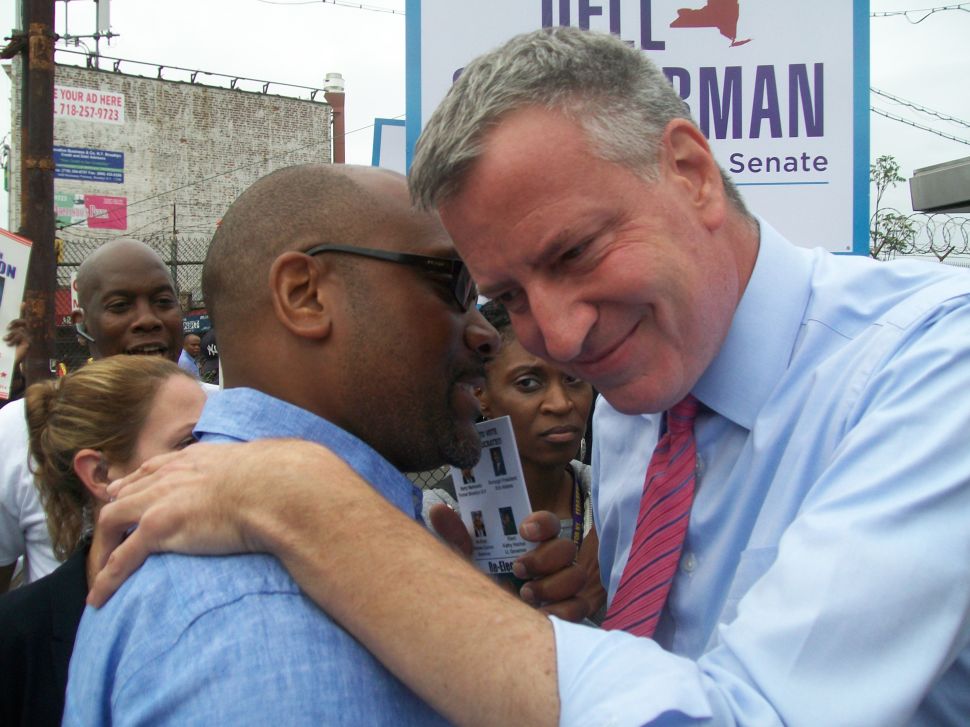