John Varvatos wouldn’t be caught mingling with fashion week socialites or swilling champagne at a soiree in the Hamptons. The champion of Doc Holliday rock gentleman style is more likely to be found scouting new bands in Red Hook. This is the Svengali who turned CBGB’s former premises into a hybrid store/museum and makes suits so fabulous even Iggy Pop deigned to wear one once. The Iggy vibe permeates the Varvatos brand. Clothes for a guy who, given the chance, may yet run off naked into the night and join a band.

“Every guy wants to be a little rock & roll,” said Mr. Varvatos, chatting with the Observer after a trip to London. “In our clothes, they can feel cool without trying, yet also totally professional.”

In just over one year, this quintessential New York menswear brand has opened 10 stores, bringing its total to 17, in cities including Boston, Houston, Bal Harbour and Mexico City. Thanks to a majority investment by Lion Capital, which bought out VF Corp’s shares two years ago, John Varvatos is on its way to becoming a major international retailer. This summer brought the opening of a 10,000-square-foot global flagship in London’s Mayfair district.  “London is the center of the universe today,” said Mr. Varvatos. “There’s a connection to the Middle East, Russia, China and the Far East, so even as we expand into Europe and other regions, it’s a great statement and great entry point to show what we’re all about.”

The success is unsurprising, given that the menswear brand Mr. Varvatos launched in 2000 fuses classic style with an irreverence found mainly among musicians, or at least among those who could give a you-know-what. His slim fitting suits with long-line jackets and waistcoats, slender-cut jeans, leather jackets and muted henleys form the core of a modern man’s wardrobe that is edgy, yet tailored and refined. Everyone from Andrew Garfield to Sir Ian McKellen wants to wear John Varvatos. Ringo Starr, the cutest and allegedly the most tattooed Beatle, stars in the current ads for the brand.

As the Cephalonian-born designer matures—he’s 48—a brand so entrenched in the roots of downtown Manhattan is growing up, too. In March, the company followed its leader and moved to the first John Varvatos store on the Upper East Side, at 765 Madison Avenue— arguably the most un-punk address possible. The biggest store in New York, amassing 4,200 square feet, features a made-to-measure suiting program and joins downtown locations on Spring Street and in the old CBGB space on the Bowery, where he still throws concerts once a month.

Mr. Varvatos decided on the Madison store after moving up there so that his children could attend local schools, then discovering that tourists and neighbors were buying his clothes at Barneys or Bloomingdales instead of trekking downtown.

“The Madison Ave. store symbolizes a maturing of the brand, and not just from an age standpoint. It’s more that we’ve evolved into a lifestyle brand with a wide demographic in age and income,” said Mr. Varvatos. “We still have our rock & roll roots but Madison [Avenue] is turning out to be a special thing for us.”

These days, the brand is all about many things. There’s the namesake John Varvatos collection, which features sportswear and tailored men’s suiting, as well as belts, bags, footwear, eyewear and limited edition watches and a fragrance. There’s the younger, edgier John Varvatos Star-USA collection, as well as the wildly successful on-going collaboration with Converse that offers reinterpreted versions of the classic Chuck Taylor All Star and Jack Purcell sneaker. In fall 2006, the partnership led to a launch of a full collection of athletic, punk and vintage-inspired sportswear for men.

Add one more item to the ever-expanding list. Mr. Varvatos is taking on his biggest career leap since launching his business: that of record producer. In February, he launched his own label in partnership with Universal Music. He hopes to discover promising talent in rock, country and blues. His first signed artist is in fact already a successful recording star though the name remains under wraps until the release dates are set.

“I want to go find the next Guns N’ Roses or Black Keys, or the next Amy Winehouse. People who don’t fit into the traditional record company formula or are undiscovered because they lack the right management,” Mr. Varvatos said. He sees an estimated 50 to 60 music shows a year, including, recently, Zac Brown Band at Fenway Park, and a young California band called Reignwolf that recently opened for Black Sabbath at the Barclays Center in Brooklyn. He had also seen the band play the previous night at Williamsburg music venue Baby’s All Right. In other words, his rock cred is well-earned.

“There is this passion about John whether it is about his collection, music, or most of all—his family, that is unwavering,” said Kevin Harter, vice president of men’s fashion direction at Bloomingdale’s.

A native of Detroit, Mr. Varvatos  was largely influenced by the city’s history of a melting pot of Motown, blues, jazz, rock and funk. At an early age he was exposed to era-defining music like The Who, Led Zeppelin, Alice Cooper and Bob Seger. In 1984, he joined Polo Ralph Lauren running the Midwest region’s wholesale business before switching to the design team in New York. In 1990 he was poached by Calvin Klein and anointed head of menswear design.

There, he oversaw the launch of the men’s collection and the influential CK brand. In 1995, he returned to Ralph Lauren as head of menswear design for all Polo Ralph Lauren brands, and created the RRL, Black Label and Polo Jeans labels. It was an exciting time for him but he felt his point of view was missing from the menswear market. “It took me months to convince Ralph to let me leave,” he said. “Finally Ralph said, ‘If you think you have something new to say, then I support you.’ ”

Mr. Varvatos launched his eponymous brand in 2000, and in the same year was recognized by the Council of Fashion Diesigners of America (CFDA) with the Perry Ellis Award for New Menswear Designer. He received a second CFDA Award for Menswear Designer of the Year in 2001. In 2005, he was once more recognized as Menswear Designer of the Year. “Years later Ralph let me know that I did have something new to say and there was no better compliment in the world than having your mentor say that you went out and did something special,” said Mr. Varvatos.

Mr. Varvatos keeps himself busy with all of his endeavors, not least of which is growing his business. But like the men who wear his clothes, he’s keeping it low-key, listening to music, lake canoeing when he has time, and when he has to drop in on the occasional fashion party, he does it his way. “I remember once John showed up at a GQ Party in Milan with the members of the band Kiss,” said Mr. Harter. “I smiled about that one for days.” 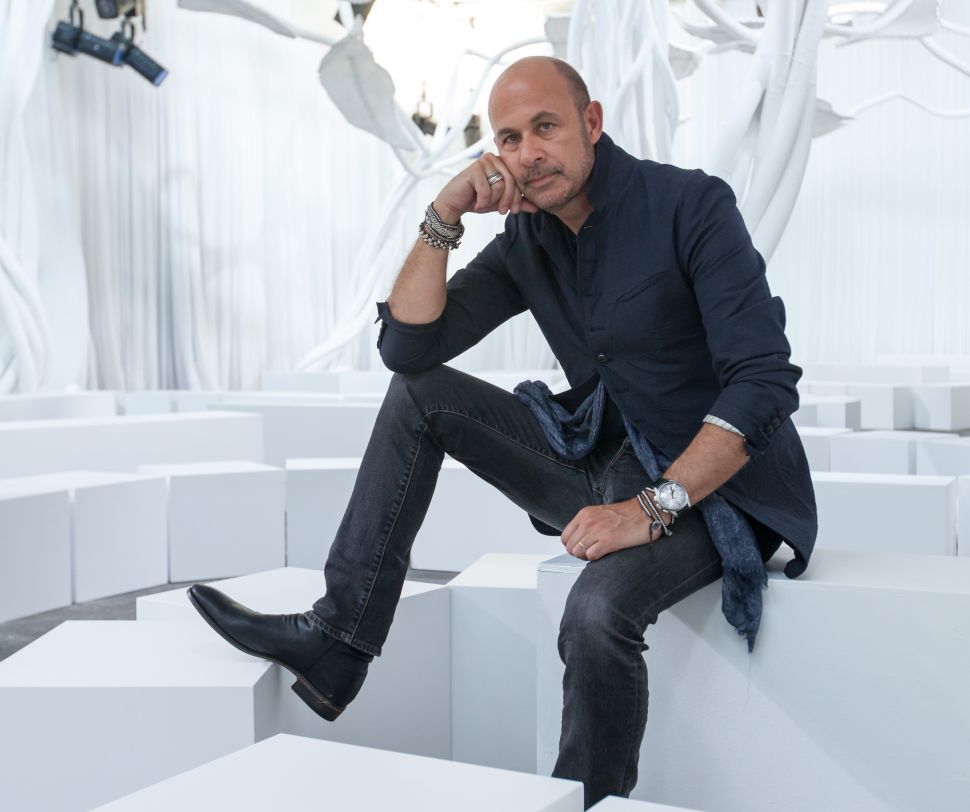