It’s the first week of school in New York and I’ve gone undercover in an undisclosed public school in New York City. There are 1.1 million children in the city’s school system and, of those, 860,000 eat a school-provided lunch. No matter how bunched the panties or swarmy the buzz gets about restaurants like the newly opened Bar Primi or the reincarnation of Mission Chinese (thank the Lord!) or, holy fucking shit, Cherche Midi (as if we need more mediocre French food), the school lunch is by far the most important meal in New York. At 11:30 a.m. every school day for the next nine months, 860,000 children will squirm about or fidget over a city-provided lunch. That’s a lot of covers. It would take Momofuku Ko nearly a century to feed that many mouths. School lunch is like all of China jumping on the culinary scene at once. It’s orbit-shifting, for the lives of the students and, because they are the future, for us, too.

Yet the school lunch remains mysterious, and the Department of Education, which administers culinary matters through the not-very-creatively named SchoolFood program, isn’t keen on lifting the shroud. I had emailed a lady from the DOE to see if I could taste a lunch one of these days. My argument was much like what I wrote above: that this is the most important meal in New York and yet unknown to most of us since the population that eats it—in this case, kindergarteners to eighth graders—tends not to be members of the media. Her curt response: “We cannot accommodate your request. We are not a restaurant and should not be compared to one.” She also sounded a citywide alarm. “There is a reporter in the field,” said one manager overheard in a school cafeteria, “so watch out.” There would, it seemed, be no lunch for me.

The department’s defensiveness is not unwarranted. The DOE is regularly derided for the sorry state of school lunches. But as Nancy Easton, co-founder of the nonprofit organization Wellness in the Schools (a.k.a. WITS), which partners with the DOE to provide culinary labs and fitness programs and to develop more healthful recipes, explains: “The Department is only complying with regulations handed down by the federal government.” In 2010, and in exchange for an extra six cents reimbursement, per lunch, from the federal government, a cat’s cradle of additional regulations ensnared the city and its schools. Many are salubrious. Rules, for example, that require more fruits, vegetables, whole grains and reduce saturated fats. Still, Big Food, in the form of ConAgra, Schwan and the nefarious potato lobby, has successfully undermined many more. Hence, potatoes today, potatoes tomorrow, potatoes forever.

But in 2015, the Child Nutrition Reauthorization Act, to which all those regulations were attached, will be back on the table. Whatever happens next year will determine what my children eat when they go to school in the next few years. I’m curious about school lunch as a critic and concerned as a parent. So here I find myself, waiting trepidatiously for the covert delivery of one. The school I am in is one of the approximately 75 schools of the 1,700 that provide an “alternative menu.” This menu, though also developed by the DOE’s Culinary Concepts department, uses recipes suggested by the more enlightened members of the Food Network mafia like Ellie Krieger and Rachael Ray as well as chefs like Bill Telepan, well known as the owner of two eponymous fine dining restaurants and less well known as a tenacious advocate for better school lunches.

Today’s lunch is from a recipe Mr. Telepan helped develop called “Texas Chicken Chili Rice Bowl.” By comparison, the standard offering is mozzarella sticks with marinara sauce and a side of pasta. Tomorrow, 60 schools will have Kung Pao chicken with lo mein. For the rest, it’ll be chicken dippers with “Fritolay ® SunChips ®.” Every school has pizza on Fridays. (The American Dairy Association and Dairy Council is a major partner of the DOE.)

But my goal here isn’t to bash the DOE. In fact—apart from hippie dippie enclaves like Burlington, Vt.—New York’s schools are way ahead of the game. There are no soda machines or Chick-fil-A stands. There’s even a handsome salad bar in every school, for which the DOE doesn’t receive federal reimbursement. Mayor Bloomberg screwed the pooch on Sandy but that man was a school lunch savior. Plus, it’s not as if the city has to welcome organizations like WITS or Grow To Learn or any of the other nonprofits that operate in the schools. Peering through its own institutional carapace, the city realizes these are more nimble and less encumbered by bureaucracy. The ship of state changes course slowly but these nonprofits are the tugboats nudging them along.

What I’m on about is something no one ever even brings up when talking about school food: flavor, deliciousness, umami—you know, the reason we go to a restaurant, love a chef, fall in love with cooking. Since the 1980s, school food has been about nutrition. And even today, school food reform is born more from ideology than it is from an epicurean love of pleasure. A cafeteria isn’t a restaurant, but could the two coexist, pleasure and nutrition? That’s what I was hoping to find out.

Finally, my lunch appears, and if I’m being vague about how it did or where I am, call it discretion. The wrath of the DOE is awesome and terrible. At any rate, there I am, alone with the elusive school lunch. Or, at least, part of it. The black beans, an important component since they constitute the USDA-mandated daily vegetable, are missing. Instead, there was just a generous scoop of brown rice (whole grains being pushed since 2010) and a large mountain of chicken bits. To each lightly browned piece of meat clung bits of garlic and pepper and chunks of tomato. There was even a tiny bit of spice, nothing offensive but a little intriguing: hints of cumin, chili powder and oregano. Though pre-cooked, the meat was tender and moist. Not bad at all. There’s a modicum of deliciousness in this bureaucratic cooking. At a restaurant—which this is not—I’d say the lunch is a double bogey. Here, it’s an eagle.

As for the mozzarella sticks that the other children were eating, I can’t say whether they were delicious or not. Probably they were, in the same way the Burger-itto would be on September 30, or a stuffed Dorito might be after school, or a Double Down might be for dinner, or any other number of temporarily gratifying and long-term deleterious meals might be.

But this Texas Chicken Chili, with a hint of spice and fresh tomatoes made of thigh meat, this was a slender flame, proving what could be done. That it is even allowed to flicker in the institution augurs well for the city’s 1.1 million students and for my kids, too. Even if the DOE is too spooked to let outsiders taste it, there’s gold in these trays. All you need is a bit of imagination and faith in the future to find it. 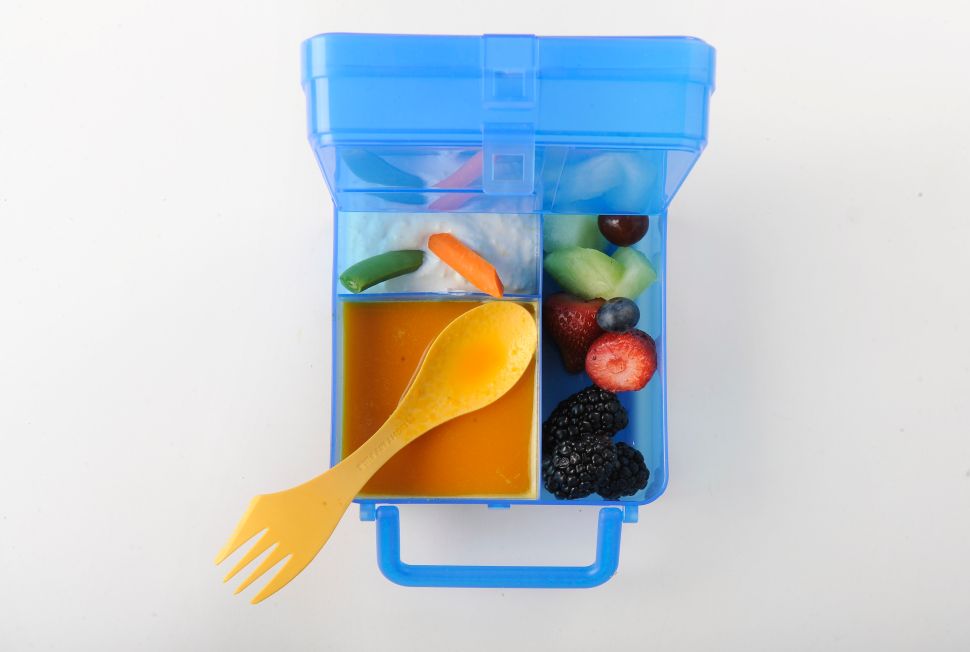