USA Today cut around 70 positions today. This news comes around a month after Gannett, the newspaper chain that owns USA Today, announced its plan to spin-off its print publishing business into a separate company, a move that has become increasingly common of late.

“USA Today is working to align its staffing levels to meet current market conditions. The actions taken today will allow USA Today to reinvest in the business to ensure the continued success of its digital transformation,” Gannett spokesman Jeremy Gaines said in a statement. The cuts were evenly distributed between the editorial and business sides.

Many long time staffers were among those laid off, Jim Romenesko reports, including Bob Minzesheimer, who had been the books reporter at the paper for 17 years, sports page editor Liza Koon, who has spent more than three decades at USA Today, Travel editor in chief Veronica Stoddart, behavior and relationship reporter Sharon Jayson and longtime pop music critic Edna Gundersen.

As more news and names continue to come in (Jim Romenesko has an updated list), some laid off employees opted to tweet out the news themselves:

Today is my last day at USA TODAY, after 30 years. I was laid off this morning, along with several great colleagues. Onward.

This round of USA Today layoffs got me as well. It was a great 10 years. When the shock wears off, I'll be looking. Job offers are welcome!!

Another bloodbath of layoffs at @USATODAY. I'm one of them, along with at least 50 others. More than half the newsroom. 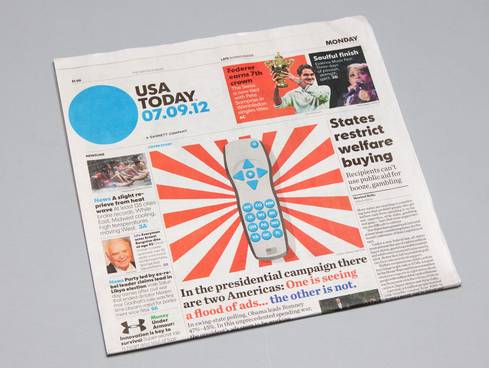