Anybody familiar with Leonard Cohen knows the haunting often depressing beauty of his lyrics. In his early years performing, Mr. Cohen’s unrelenting grimness became something of a joke. The British media, for example, in the 1960s and 1970s frequently referred to him as “Laughing Len.” Laughing Len turns 80 today; and his music can still invoke great sadness. The first verse of one of the songs on his newest album is as depressing as anything Mr. Cohen wrote in the 1960s or 1970s. “I saw some people starving . There was murder; there was rape . Their villages were burning .They were trying to escape.  I couldn’t meet their glances.  I was staring at my shoes . It was acid; it was tragic . It was almost like the blues.”

Nonetheless, in recent years Mr. Cohen has seemed at peace, self-aware, and, dare I say it, even happy. These days, after the first two or three songs of one of his concerts, Mr. Cohen often comments, “Sometimes I look at myself in the mirror and I say, ‘fer chrissakes, Leonard. Lighten up.’ ” Onstage, Mr. Cohen appears cheerful; many recent photos show him smiling. If it is possible for an 80-year-old to have an impish grin, Mr. Cohen now has one. The song “Going Home” from Mr. Cohen’s widely acclaimed 2012 album Old Ideas is a reflection on aging and mortality, but it also demonstrates Mr. Cohen’s new ability to laugh at himself a little as he describes himself as a “Lazy bastard living in a suit.”

Mr. Cohen continues to wrestle with sad and significant topics in his music, showing an understanding of the world and the human psyche as deeply damaged and fragile. However, unlike many other musicians Mr. Cohen almost never appears angry or disrespectful to the public. A live performance of Mr. Cohen’s includes him frequently thanking the crowd and his band. When the Webb Sisters, who usually accompany him on vocals, perform one of his songs without him singing, or when a musician plays a solo, he stands in solemn appreciation of their work. He frequently pauses between songs to clasp his hands together and make a small bow to the audience. Perhaps these are tics Mr. Cohen has developed to cover up his nervousness, but they communicate a generosity of spirit that audiences appreciate. Mr. Cohen seems to understand the very practical issue that fans pay a lot of money to see performers like him and being all but ignored by a slightly preoccupied looking star, as can happen at other concerts, is not the experience most fans want.

Today, Mr. Cohen is probably best known for writing the song “Hallelujah,” which has been covered, often quite notably, by more or less everybody in the last 30 years. “Hallelujah,” is indeed a beautiful and memorable song, but the breadth of Mr. Cohen’s ability to write powerfully and evocatively about many subjects is extraordinary. Themes of betrayal and heartbreak are common in popular music, but the epistolary “Famous Blue Raincoat” explores the feeling of being cuckolded with unique despair. Mr. Cohen writes about sexuality as if sex was something that thinking grown-ups actually did. Lines like “you’ve touched her perfect body with your mind,” “I love to see you naked over there especially from the back. Oh take this longing from my tongue. All the useless things my hands have done,” or the song “Paper Thin Hotel,” are intelligent, and genuinely sensual.

The song “Dance Me to the End of Love,” in which Mr. Cohen implores “Dance me to your beauty with a burning violin. Dance me through the panic till I’m gathered safely in,” is an undeniably romantic song but the lyrics tell a much different and more important story of the Holocaust and what Mr. Cohen has described as “hearing or reading or knowing that in the death camps beside the crematoria, in certain of the death camps, a string quartet as pressed into performance while this horror was going on.”

Jewish themes have always been central to Leonard Cohen. Many Jews of Mr. Cohen’s age, or even slightly younger, changed their names to sound less Jewish and further their careers. Leonard Cohen is about as Jewish a name as you can get, but Mr. Cohen, who has referred to himself as “the little Jew who wrote the bible,” has worn it proudly for 80 years. His religious upbringing has informed his music in many ways, but his larger Jewish identity perhaps even more. Mr. Cohen has never forgotten what it means to be Jewish.

Speaking at a concert in Warsaw in 1985, by way of introducing “Hallelujah,” Mr. Cohen told the crowd, “When I was a child I went to a synagogue every Saturday morning. Once in this country there were thousands of synagogues and thousands of Jewish communities which were wiped out in a few months.” When the Yom Kippur war started, Mr. Cohen took a boat to Israel from his home at the time in Greece and offered to do what he could to help the Jewish state. Not surprisingly, he was put to work entertaining the troops, often in very small groups very close to the shooting war. In recent years, Mr. Cohen has refused to participate in any BDS activities and continues to perform in Israel.

Mr. Cohen now is much more than the sum of his music. At 80, it is possible to see the arc of Mr. Cohen’s life more fully. Journeying from a privileged upbringing in Montreal, to being one of the leading young Canadian poets of the post-war generation, to being too old to fit into the hippie or folk scene when he first came to New York—Mr. Cohen has continued to carve a path unlike any other living artist. His life doesn’t seem as peripatetic now as it did decades ago when he was moving from country to country, relationship to relationship, and dabbling in spiritual solutions ranging from Zen to scientology. Today, he is an older man who is alarmingly comfortable in his skin and who has produced a lifetime of work where the same themes of probing the reasons for human suffering, the relationship between people and higher powers as in songs like “Who By Fire,” as well as sensuality and naked bodies are explored with increasing insight with each passing decade. 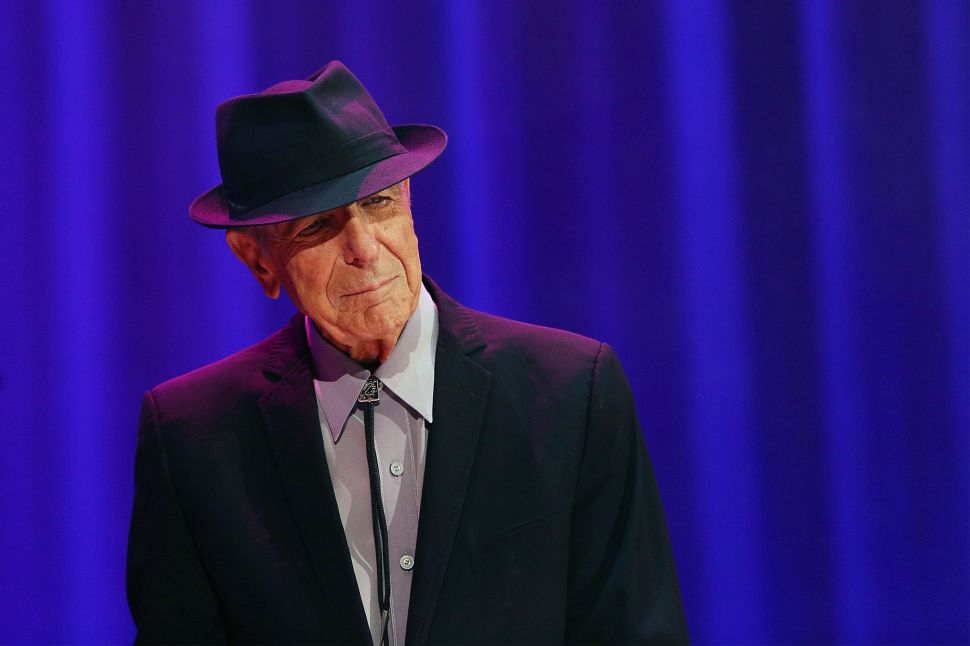