Minutes after 5 p.m. on a late-summer afternoon, the sun cut across 10th Avenue and through the blinds of Amanda Freitag’s recently reincarnated Empire Diner, on the corner of 22nd Street. Carrying a clipboard and wearing her kitchen whites, the executive chef and TV regular—Chopped, Iron Chef, et al.—slid into the dining car’s southernmost booth and covered her eyes. “I feel like a vampire,” she said, fresh from the walk-in fridge.

On the table before us: a fleet of three boozy floats, including the Salty & Sweet, made from salted caramel ice cream, Coca-Cola and vodka, the Black Cherry Bombe, made from black cherry soda, vanilla ice cream and bourbon, and the Grapefruit Fizzy Float, which features a scoop of grapefruit Campari sorbet plopped into a coupe of Prosecco. “That one is really elegant,” she said. “I wouldn’t call that a float exactly, but it is a frozen thing floating in booze.”

After taking a sip of each, I asked Ms. Freitag if she wasn’t going to sample them with me. “Yeah, I’ll have some. It’s five o’clock somewh—,” the chef said, pausing to check the time. “Here!” she continued. “It’s five o’clock here—hah!”

She could be excused for being a little turned around, time-wise. Ever since Empire Diner opened in January, she’s been working hectic hours, as the establishment—which began by serving a dinner menu only—has rolled out new offerings, like lunch, brunch and happy hour. The plan is to eventually remain open 24 hours—“or maybe 22,” said Ms. Freitag—with breakfast coming next, followed by a late-night menu.

The woman behind the chef-inspired diner has been so busy, in fact, that this was the first time she’s been able to sip on the floats, which were added to the happy hour menu for summer, since first creating them. (They are likely available through the end of this month.) “Ooh, this is bourbon all right,” she said, tasting the Black Cherry Bombe. “And that [vodka] one is dangerous. I don’t even taste the booze in there. That could get bad.”

Adding floats to the menu was a no-brainer, according to Ms. Freitag, given the diner theme. Plus, she and her team were looking to do something fun for happy hour. “The boozy milkshake has been done a lot, and I don’t want to do a whole pint glass full of dairy and booze,” explained the chef, who spent hours experimenting in a room full of soda, booze and ice cream, before settling on these combinations. “It’s the bubbles, the carbonation,” she added of why the floats work so well. “Also, the ratio. This is way more soda and booze than ice cream.”

There’s something extremely indulgent about drinking an ice cream float, of course. Ms. Freitag likens the experience to a little vacation: “It just feels like you could be rolling up to an A&W somewhere, except it’s the best A&W roadside burger stand ever, because it has a full bar, so it’s like the dream, the oasis.”

If that image sounds like some kind of Norman Rockwell painting, you’re not wrong. “For me, there was a hot dog stand in New Jersey called Hot Dog Johnny’s and they have an incredible birch beer and you can get a scoop of ice cream on top,” remembers Ms. Freitag. “That’s summer 100 percent to me. It’s nostalgia, because I always went there with my family.”

Like many good cocktails, the floats also evolve as you drink them, becoming more caramel-y and vanilla-y and grapefruit Campari-y. “That’s my favorite part, when the ice cream starts to melt,” she said, taking another sip of the Salty & Sweet. “Mmm. This is probably my favorite. I know I shouldn’t choose a favorite, they’re like my children, but this has to be my favorite.”

As for actual vacations, Ms. Freitag said she might be able to take some time off in 2016. These days, it’s full speed ahead, as she finishes up work on her first cookbook and prepares for what she expects to be a busy fall season. Come January, she’ll be shooting new episodes of Chopped, as well. “We’re just having fun,” Ms. Freitag said, switching to the Grapefruit Fizzy Float. “Ooh. This one is getting prettier. It’s super fresh, and you taste the grapefruit so much more now.

“This could definitely be a liquid lunch, and you wouldn’t feel so guilty about it,” she went on. And then inspiration struck: “Maybe that’s what I’ll take time out for!” Ms. Freitag considered the coupe, took one final sip. “This is bad,” she laughed. “I have to work a whole dinner service right now.”

HOW TO MAKE IT: SALTY & SWEET EMPIRE FLOAT

Method:
1) In a chilled pint glass, add the scoop of ice cream.
2) Pour a shot of vodka over the ice cream and then slowly add the Coca-Cola.
3) Place a straw inside the glass and enjoy! 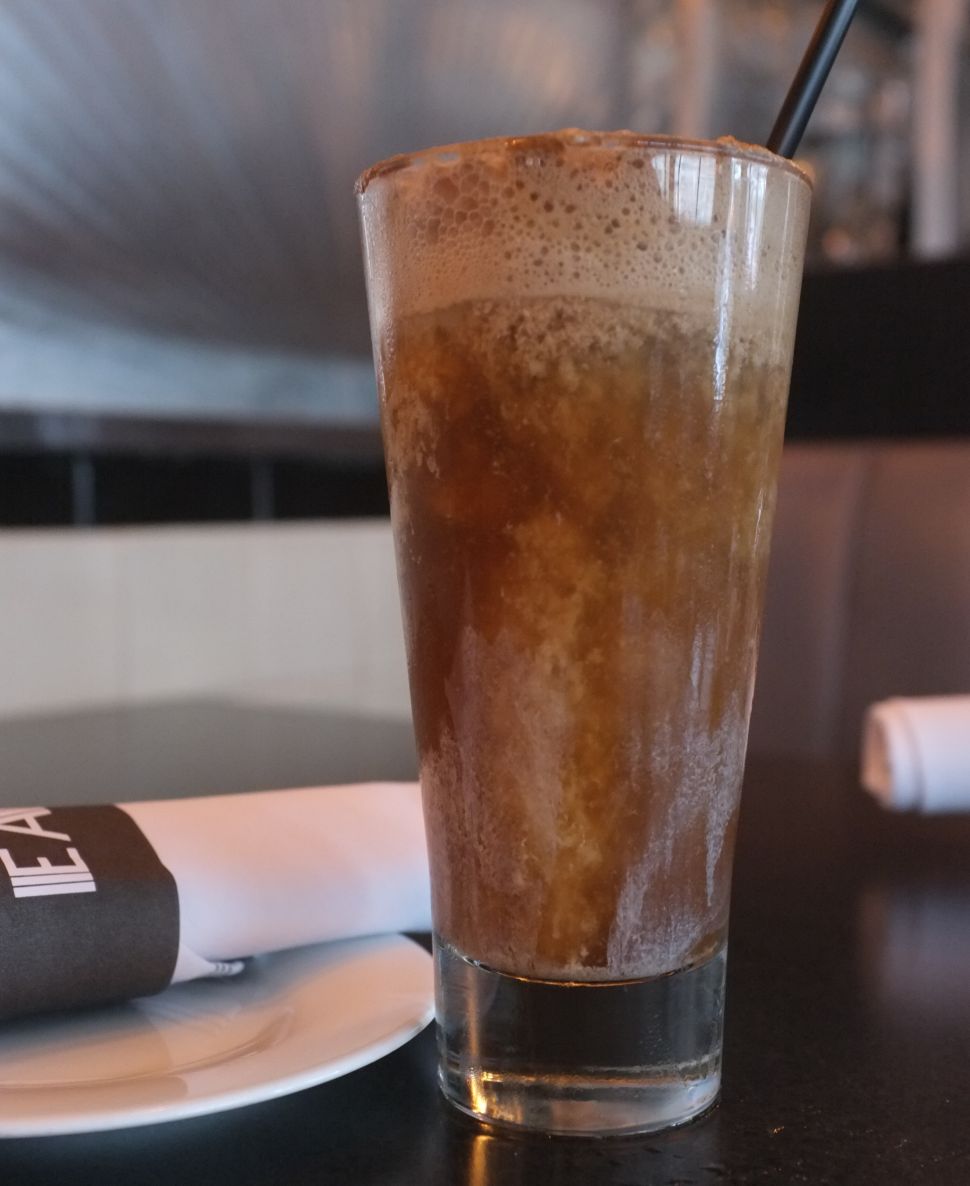