The much maligned pilot for NBC’s The Mysteries of Laura that aired last week centered around a woman who was juggling a full-time career AND motherhood. Where TMOL erred was repeatedly throwing the idea in your face that this scenario was the least likely thing ever. Is she going to be able to have a family and a job, while maintaining her strength? A confident working woman and mother? WHAT A WACKY CONCEPT! All this, in a time when pointing out the force-feeding of your Pre-K age children cough medicine until they vomit as a sign of bad parenting will have someone labeled a misogynist.

Over on CBS, Madam Secretary’s pilot similarly utilized a female lead, working in a high-stress work environment while balancing a husband and two kids. And you know what? It’s never called into question whether she can do it. She just does it. And does it incredibly well, often with more confidence and poise than most of her co-workers.

And in doing so, CBS has created both a female lead and a new series I can root for.

It took some convincing though, because the first ten minutes or so of the pilot was janky to say the least. The current Secretary of State’s plane goes down under sketchy circumstances, and former CIA analyst and current college professor Elizabeth McCord gets a personal visit from the president (her old boss), along with a job offer. I don’t pretend to know a lot about politics, but I’m not sure if that’s how that works.

“You don’t just think outside the box, you don’t even know there is a box!” the president exclaims as part of his pitch, which is a line that someone probably wrote down thinking it was clever, forgetting it had to come out of a real human actor’s mouth.

But the show wisely jumps ahead two months, skipping Elizabeth’s awkward integration into the White House and finding her comfortably suited in her position. Her easy confidence is what I liked the most about the show and the character. She’s faced with a pretty steep challenge two months into her tenure –two American teenagers, captured and held prisoner is Syria. She must also contend with Russell Jackson, who apparently was recently promoted from Vampire Magister to Chief of Staff, so good for him.

In a welcome change for television, Elizabeth actually uses the male characters assumptions about a female in power against them. She scoffs at the vampire chief of staff’s suggestion that she sees a stylist. But later on, when her department needs to distract the media from the Syrian conflict, she simply changes her hairstyle. The media (like the idiots we are) gobbles that up, and a makeover takes precedent over two captured American teens.

All this with two kids whose biggest problems are missing their boyfriends and disliking school and a husband that isn’t even cheating on her. What a concept.

Unfortunately, although Madam Secretary the character seems to know exactly who she is, Madam Secretary the show isn’t too sure. There’s rapid fire dialogue through the halls of the White House that probably had Aaron Sorkin rubbing his hands together with delight. Elizabeth’s assistant Blake seems oddly on loan from Veep. But the entire Syrian conflict — complete with spy deals, darkened jail cells, and an episode ending twist that sees someone killed because they know too much — is Homeland-lite. And then somewhere in there someone tells Elizabeth she’s trending on Twitter, and I’m not sure what this show wants to be.

But if this show is going to survive it is going to survive on the shoulder’s of Tea Leonia. Because when she tells the president “I didn’t uproot my life and my family to sit in endless staff meetings and plan parties for potentates, I came here to do the job that you said only I could do,” you believe that she cares about her position AND her family. At the same time. And you believe it without a second thought. 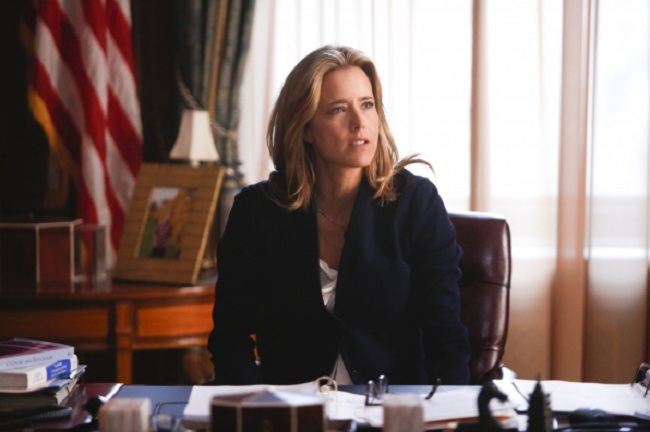