Sources tell the Observer the mailer began appearing today in the Brighton Beach neighborhood, home to a large Russian-speaking Jewish population. It claims in English and Russian that Ben Akselrod, a Belarus-born Orthodox Jew who is challenging Assemblyman Steven Cymbrowitz in the Democratic primary, is anti-Israel–and presents a photo of Mr. Akselrod alongside Mr. Salgado as proof.

“Ben Akselrod Supports the Palestinian State. Ben Akselrod is a traitor to our community. SUPPORT ISRAEL, SAY NO TO AKSELROD,” the mailer reads.

Mr. Salgado said he was aghast at the literature, attacking it as racist.

“This is outrageous, it’s unbelievable,” he told the Observer. “I am not Palestinian. My skin is dark, I might look Egyptian, I might look Palestinian, but I am 100-percent Puerto Rican from the Bronx. This is the biggest racial remark someone could do to another in an unjustified manner.”

Mr. Salgado also noted that, as a fundamentalist Christian minister, he is a fierce supporter of Israel–and that his network of largely Hispanic churches includes locations inside the district.

Mr. Akselrod echoed Mr. Salgado’s remarks, claiming the fliers were part of a concerted effort to undermine his Jewish identity. Mr. Cymbrowitz–who is Jewish, but not Orthodox–had previously accused his opponent of not keeping the Sabbath during a legal battle over petition signatures.

“This is the second set of false accusations aimed at me in this campaign. The first was my opponent accusing me, an Orthodox Jew, of violating Shabbos. Now, this anonymous, insulting flyer erroneously claiming that I support a Palestinian state. This second attempt to disparage my name is doubly offensive because it brings Evangelical Rev. Erick Salgado, former candidate for Mayor, and a strong supporter of Israel into this fraudulent situation,” Mr. Akselrod said in a statement.

He continued: “The flyer uses a picture of Rev. Salgado and me holding our hands up in victory after he endorsed my candidacy for Assembly. It wants people to believe that the reverend is a Palestinian. This is more than misleading: it is racist and disrespectful to Rev. Salgado’s Puerto Rican heritage. It is my hope that voters will see this for what it really is and respond appropriately at the polls on Tuesday.”

Mr. Cymbrowitz’s camp denied having any involvement in creating or distributing the mailer, but also refused to condemn its content. Both Mr. Cymbrowitz–the son of Holocaust survivors–and Mr. Akselrod held rallies supporting Israel during its battle with Hamas militants in the Gaza Strip last month.

This is Mr. Akselrod’s second effort at unseating Mr. Cymbrowitz, a 14-year incumbent. The challenger came within fewer than 300 votes of defeating the assemblyman in 2012. 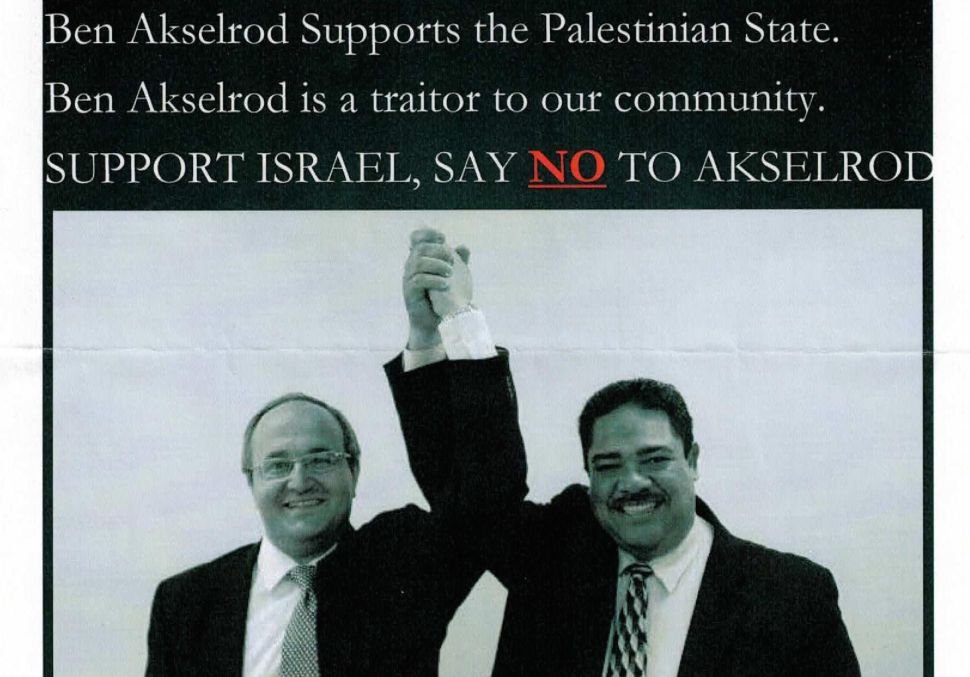