Ever feel like Facebook’s targeted advertising has no idea who you are, sending you ads for women’s hygiene products when you’re a man, or ads for dating sites for ethnicities and religions you’re not even a part of? Well, consider yourself lucky that Facebook doesn’t know you too closely — evidently, it’s enough to drive a person mad.

Brian Swichkow was looking to get back at his roommate after an embarrassing prank, and decided to put his professional skills to use. Mr. Swichkow is an online marketer by day, and devised a plan to game Facebook’s ad system to send his roommate eerily targeted ads — and when your roommate is a sword swallower, you can get very targeted.

To run a campaign against just his roommate, Mr. Swichkow created a custom targeted email list called “My Roommate” with only a single address on it, and began designing the ads. You can’t make a one-name list for Facebook marketing campaigns anymore, but Mr. Swichkow describes a work-around in his post if you want to try.

Mr. Swichkow began with the pill-swallowing ad pictured up top, and slowly ramped up the specificity while his roommate freaked out in Facebook messages:

One ad for a YouTube video read, “If you’re the kind of coffee-drinking guy who has a black bandana in his pocket, watch me!”

Serendipitously, the timing of the prank coincided with the Snowden revelations, which then drove the roommate to begin acting erratically for fear the marketers were using NSA spying tactics to surveil him. Mr. Swichkow wrote on MrSocialSherpa:

There’s something to be said about the power of uncertainty and how it attaches itself to our deepest fears. Every day he was left without an answer was another day his paranoia amplified. It was like I had cast him in a horror movie where killer never reveals himself and the suspenseful music just keeps endlessly looping.

When Mr. Swichkow noticed his roommate was starting to come apart at the seams, he ran an ad called, “Ever feel like your roommate is creating Facebook ads targeted at a niche of just you?” Luckily, his roommate took it well, laughing and congratulating Mr. Swichkow on Facebook, instead of pulling a 26 inch sword from his own throat and murdering the poor marketing maven.

Because Mr. Swichkow ran the campaign at such a small sample size, it only cost him a grand total of $1.70, which Mr. Swichkow writes was “was worth every… single… penny.” 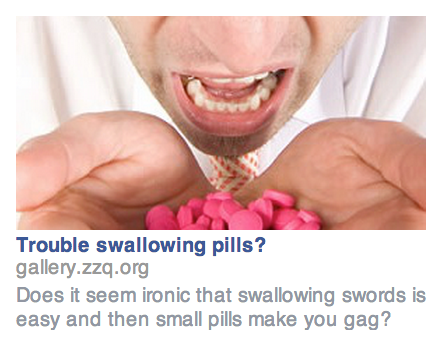