Gordon urging Jaimee not to cry for the 50th time. (Fox)

Summer is over. The six remaining home cooks walk together to their team challenge at the Marquis Hotel. The home cooks are greeted by Gordon and Graham. Joe is away on “important restaurant business.” Hope all your restaurants are OK, Joe. You are in our thoughts. This week is the MasterChef restaurant takeover. The home cooks will be in command of the kitchen of Cavatina which, according to Chef Ramsay and Yelp, is pretty fancy.

Since they won the dim sum challenge last week, Leslie (Red Team) and Jaimee (Blue Team) get to be team captains. This should be good. Leslie freaked out on the beach last time he was captain and Jaimee crumbled when she had to tell people what to do.

Jaimee gets first pick and she goes with Christian. Then Leslie chooses Elizabeth. Of course, Jaimee picks Courtney because nobody wants Cutter. Will Cutter’s luck ever run out? He almost deserves to win for making it this far.

The home cooks go into the kitchen to meet the owner/chef of Cavatina, Michael Schlow. Chef Schlow demonstrates the preparation for the dishes they will serve tonight. Guests of the restaurant will order either Prince Edward Island Mussels or Parisian gnocchi for their appetizer and a Mediterranean sea bass or New York strip steak for their entree.

The teams have one hour to prepare and two hours to serve all the restaurant guests. Gordon and Graham will be talking to the guests about their opinion of the food but the final decision will be up to the judges. G&G will be tasting and watching and ultimately picking the winning team.

Expediting the orders and checking every plate will be Chef Ramsay. Better not try to sneak a questionable plate past Gordo because he’ll throw it right in the garbage.

Prep time has begun. Leslie and Cutter are already fighting. Cutter doesn’t think Leslie should be handling the steaks. Leslie lays right into Cutter. Jaimee is crying already. Such an easy crier for someone with so many tattoos. Gordon pulls Jaimee aside and attempts to give her a pep talk and tells her not to give up and, “Get used to your voice.”

Leslie and Cutter are at it again. Cut to video of Cutter telling us that Leslie is an “Ex-beautician, house-bitch.” I’m not a huge Leslie fan but those are some harsh words. It looks like the two keep bumping heads because Leslie is micromanaging Cutter and/or Cutter is just being a dick. Leslie pulls Cutter aside in what becomes an almost comical contest to see who is more annoying. In his obsession to have Cutter look at him, Leslie screams out “Look at me” like the Joker in The Dark Knight. Cutter is only capable of responding to conflict by yelling like Kenny Powers.

It’s a real clash of the titans. Oh no, you guys went and got Gordon Ramsay involved. Once Gordon breaks up the fight, each of them can’t wait to be the most reasonable. The two shake hands and get back to work. Roll more video of Cutter saying Leslie is, “a sad excuse for a man.”

The restaurant is filling up. The appetizer orders are coming in. Courtney is in charge of the Blue Team’s gnocchi. She points out that she “won her apron” on gnocchi so she’s got this. Nope. The first plate of Courtney’s gnocchi comes out and…“I hope you’re joking.” That’s what Gordon says as he holds up the dish. Courtney admits that it “looks like glue.” Gordon disagrees saying, “you’re being polite. It looks like shit.”

The Red team is doing great. Everyone is getting along and the dishes are coming out.

Not it! Jaimee decides she can’t be team captain anymore so she hands her captain armband over to Courtney who is still struggling with the gnocchi. It’s not the kind she is used to making and it keeps falling apart on her. Courtney is captain for about 30 seconds and hands the armband over to Christian. The Blue Team hasn’t gotten its first appetizer dish out yet. Once Christian takes over things start to move along. For some reason he is able to make the gnocchi properly and now the orders are coming out.

Entree service has begun. The Blue Team is now functioning after a couple of leadership turnovers. It’s the Red Team that’s having problems. Cutter and Leslie are at again. I’m starting to work on a theory that Cutter is actually a very talented improv comedian who has infiltrated MasterChef. Leslie is also not very diplomatic while telling Cutter to, “shut the fuck up.” Dad is mad again and he’ll turn this car around and go home. Gordon tells Cutter and Leslie that if they don’t stop fighting they’ll be kicked out of the kitchen and Gordon will cook the food himself with Elizabeth. That shuts the two of them up again.

Everybody’s moving now and entrees are being served quickly. Graham is checking with guests about their entrees. Most seem happy. One guy thinks the Blue Team’s steak wasn’t seasoned enough. It’s very close. Too close. Graham and Gordon can’t decide on a winner. The decision will be given at the MasterChef kitchen.

Back at MasterChef HQ the winner is announced. Go fight up in the balcony, Leslie and Cutter, because you two and Elizabeth are safe. That’s right, Cutter is in the top five. Jaimee, Courtney and Christian are handed black, pressure test aprons.

This late in the game it’s going to be a difficult pressure test. Gordon reveals that the pressure test is croquembouche. What the heck? A tower of mini cream puffs, held together lightly by caramel and with caramel thread around it. It’s a dessert challenge but it’s a difficult, weird one. Desserts put Jaimee at an advantage right away and Christian at a disadvantage. Courtney always does fine. Jaimee has made these things before. She tells Gordon that she’s made five croquembouches in the past. Courtney has never made one and Christian has no idea what it is. They have 90 minutes starting now.

While they prepare the croquembouches, the only home cook that seems confident is Jaimee. Courtney even tells Gordon that she’s afraid that she might be going home. Her cream puff rolls are all different sizes and she’s nervous. It’s very unlike Courtney to show weakness.

Graham checks in with Christian, asking what his plans are if he has to go home today. Then Graham starts talking about Christian’s son. Graham, you’re my favorite judge but let the man fill his puffs. Christian already seems lost and is way behind the others.

Jaimee and Courtney are already building their towers but Christian is still waiting on his caramel to be ready. It looks like he might not finish but you know he will because everyone always does. Time is up and the croquembouches are presented.

Courtney is first. She has the best looking one. She is the only cook that got the caramel thread around her croquembouche. Gordon takes a look and is already impressed. It tastes perfect, too. Courtney nailed it. Graham agrees, calling it “top notch.”

It’s Christian’s turn. His tower is a bit rough. The caramel is different colors and some of the cream puffs are stuck together too hard. Gordon also notices that there isn’t enough filling in the cream puffs. Gordon and Graham agree that the pastry shells were baked well and taste good.

Jaimee’s up. She doesn’t have the carmel thread but the tower has a the right conical shape. Gordon notices that there is a lot of caramel holding the croquembouche together. Gordon asks Jaimee to try to pull off a cream puff. She tries but she can’t do it. Once Gordon pulls one off, he notices that the inside of the cream puff is wet because it was undercooked. This is not looking good. Graham steps up and adds his two cents — the pastry cream is bland. Jaimee starts crying because she knows it is over. Graham feels bad and throws in some positives, but that croquembouche is screwed. Jaimee is lucky that Joe is away because he can get really mean.

Gordon and Graham go pretend that they have to think about the decision before they come out and tell Jaimee she’s going back to Queens.

We have our top five. 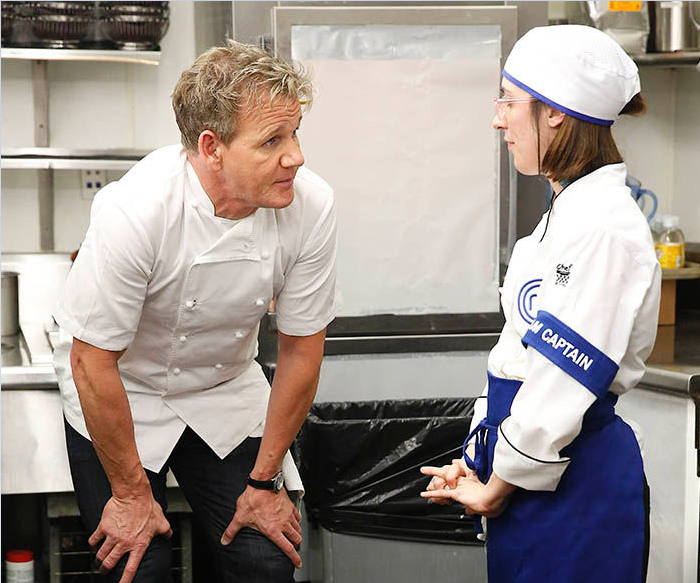