This is it. The two-hour MasterChef finale. We’ve been through a lot together but it all ends tonight when one of the final three walks out a MasterChef and the other two just walk out. Either Courtney, Elizabeth or Leslie is the next MasterChef. It’s between a stripper, an advertising exec, and a rich guy. I think Courtney might be the only one that contributes to society. I’d be more on her side if she didn’t constantly talk in that breathy baby whisper while she half closes her eyes. Just say how you cooked the fish.

In the first competition the three will have 90 minutes to cook an entree dish for 50 chefs representing the 50 states. MasterChef is a lot like the electoral college. The chefs will be served all the dishes in the MasterChef restaurant and select a winner who will go on to the finals. The two losers will battle in a pressure test. This is too much for the three to prepare individually so they will be each be given two sous chefs.

Enter six favorite home cooks from this season: Victoria, Ahran, Daniel, Willie, Jaimee and Christian. What, no Cutter? Graham presents six fortune cookies. Each of the cookies has a name in it. The finalists each pick two cookies to find out who their sous chefs are. Daniel and Willie assist Courtney. Ahran and Daniel will work with Leslie. Elizabeth gets Jaimee and Victoria. All strong teams.

Time starts now. The teams rush to the pantry to shop for their ingredients. Elizabeth is making seared skin-on red snapper fillets with cauliflower, prepared three ways. Leslie is making fillet mignon with herb gnocchi. Courtney is preparing halibut with a ginger-soy glaze.

The judges huddle up. They are worried about Courtney’s halibut because it can’t stand for too long. Joe likes Elizabeth’s dish but doesn’t understand Leslie’s choice of steak and gnocchi.

The judging chefs enter the kitchen in a parade of a bunch of famous TV chefs and some other nobodies, but I’m sure they’re good too. They’re all wearing chef jackets, even though they’re just going to be eating. We’d all believe they are chefs if they wore regular clothes. It’s theater, I get it, but it still looks stupid.

All the teams are working together well. Leslie starts a small fire but Gordon stomps it out. Courtney falls behind and has a difficult time communicating with Willie and Daniel. Leslie and Elizabeth are both plating but nothing from Courtney. Courtney deals with it by yelling at Daniel and Willie. Gordon also yells. Yelling works because they get everything plated just in time for when Gordon calls, “Hands in the air.”

See ya, losers. Time for the sous chefs to beat it and the finalists to sweat while the chefs decide who gets to be in the final two.

The chefs make their decision. Elizabeth wins. She will face the winner of the pressure test, Leslie or Courtney, in the final round for the title.

The pressure test is, of course, a dessert challenge. This season has had way too many desserts so why not squeeze one more in? Courtney and Leslie will have make a New York cheesecake with cherry sauce, key lime pie, and Boston cream pie. The challenge is called Cakes of America but Key Lime pie is really a pie. All season almost every challenge has some kind America tie-in. It’s so over the top it actually makes me question the show’s patriotism. What are they trying to hide? No time to identify the spy (Joe?). The pressure test begins.

Leslie struggles to get his cheesecake in the oven in time. When he does, it’s questionable whether he’ll have enough time for it to bake and cool properly. It’s going to be close. Both Leslie and Courtney are talking to themselves a lot. They’re cracking under the pressure. Time’s up.

Courtney and Leslie present their desserts to the judges. Courtney’s cheesecake is better than Leslie’s underbaked one, but Leslie has the better key lime pie. It comes down to the Boston cream pie. Courtney’s does not look pretty and the cream is oozing out the sides. When Gordon cuts into it the layers aren’t stuck together. Leslie’s looks perfect but when Gordon takes a bite he realizes that Leslie used salt instead of sugar. Down goes Leslie. You’ll have to go back to your rich guy lifestyle.

It is definitely down to the two strongest competitors this season. They enter the MasterChef kitchen but this time there is an audience cheering. Elizabeth and Courtney’s families come out to wish them luck. All the home cooks who competed this season are there too. It’s a different energy than they are used to.

The two will each have to prepare a three course meal of their choosing for the judges. Each judge must be served an entire dish for each course. They are each only going to take a few bites, but still they want a whole dish. The cooks have 10 minutes to get everything they need from the pantry to prepare for the meal.

They start preparing their appetizers. Courtney makes a pig ear salad. Elizabeth makes grilled octopus. The octopus is in a pressure cooker, she Elizabeth will give her very little time to plate. It’s very close but the dish gets plated as it always does. Isn’t weird that nobody ever misses the time cut-off ever? Anyway, hands in the air.

The judges seem to like both dishes equally. There isn’t a clear winner of the appetizer round.

Entree time. The two have 60 minutes to prepare their dishes. Elizabeth makes spiced lamb and Courtney makes duck. The audience and the pressure gets to Elizabeth and causes her timing to be off. The lamb gets plated but it’s a close one. Time’s up.

The dishes are served to the judges in the back, away from the audience. Elizabeth presents her spiced rack of lamb with red quinoa, carrot puree and a mint yogurt tahini sauce. Joe thinks the lamb is undercooked. Gordon says the lamb is cooked perfectly and thinks all the components work well together. Graham also likes the dish and says, “It’s something he would order again.”

Courtney’s turn. She serves her Sumac duck breast with spring vegetables, farro and a brandy sauce. Everyone praises the duck. Graham even says it’s one of the best dishes Courtney’s put up. It looks like Courtney’s ahead now. All that’s left is the dessert.

The dessert preparation has begun. Courtney is making cherry meringue with salted chocolate and spiced almonds. Elizabeth is making a grapefruit and olive oil semolina cake with poached plumbs and pistachios. Those both sound gross but fancy.

Some mistakes are made. Elizabeth’s cake comes out of the oven and it’s undercooked in the middle. She fixes it by cutting the pieces from the outer edge and only serving those. Courtney eats one of her meringues but then realizes she doesn’t have any extra. Now instead of serving three meringues per plate, she serves two so the plates look even. Time’s up again.

The desserts are presented. Graham notices that it seemed like there was missing meringue on the plate, because the she still served the missing meringue’s toppings in a little pile next to the other topped meringues. Gordon thinks it’s a good dessert but the messiest plate that Courtney’s put up.

Elizabeth’s cake goes over big. Graham says it’s a “delicious dish.” Joe loves it too saying it “fires on all cylinders.” Gordon loves the cake and also commends Elizabeth for seeing that her cake was undercooked and fixing it by serving from the edges. It really looks like Elizabeth took the dessert round but is it enough?

The judges have discussed it and it’s now time to announce the winner. As Courtney and Elizabeth stand in front of an audience including their friends and family Gordon prepares to say the name. They really draw this part out. And the winner is…

Medic! Elizabeth’s husband fainted. He’s ok. He just has 250k riding on this. Gordon gets him back on his feet.

OK, now it’s really time to announce the winner. Sorry Philadelphia but you’ve lost a stripper. Courtney is the winner! 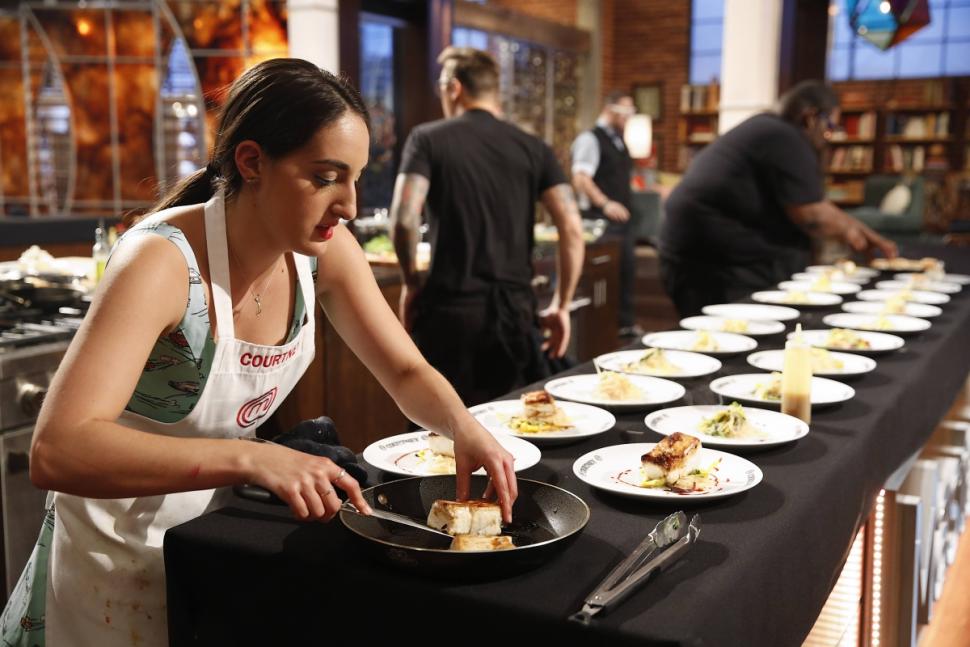