Being a small business owner, husband, father, brother, lover, and lead researcher on a major scientific study is a long, hard, vigorous job that Bill Masters isn’t up for. In “Below the Belt,” Bill can’t seem to penetrate the tasks before him.

He’s a bad business owner, failing to rouse the funds to even keep the lights on in the office while refusing to let Betty rent out the cavernous office.

He’s certainly not being a good scientist. Another researcher has published similar research — which Masters and Johnson failed to do after releasing their study to the doctors at Maternity — and Bill feels inadequate. There are no runners up in science, only footnotes, and he’ll never win the Nobel if some other guy gets there first. So, despite low funds, Bill ballsily calls a PR man (played creepily by Adam Arkin) to lubricate the way for the study’s success. The solution? That the loveably-bickering duo share their sexy back-and-forths on TV. The idea fails to arouse Bill.

He remains a terrible husband to Libby, who is now spending most of her time getting sandwiches for Robert and the rest of the CORE staff. Bill tries to make a firm stance — that Libby be home in time to make dinner — but fails as his wife dedicates all of her time serving other men.

But lest we think Bill’s gone entirely soft, he refuses to believe in his own brother Frank’s alcoholism. He rigidly resists that Frank’s troubles are caused by anything besides an innate internal weakness. Frank is always willing to submit — to temptation, to their monstrous father’s abuse — and that’s why he suffered, not because of drinking. To Bill’s credit, Frank accuses their mom of alcoholism (after she gets into a car accident after having “one Tom Collins,”) and Bill of being an alcoholic (because of his secrecy and lies), and does “forgive” in a really unpleasantly accusatory way, so some of the friction between them makes sense. That is, until Bill grinds so hard against his brother that Frank explodes, pounding Bill’s face in.

Other characters are far more successful. Lester and Barb connected over their shared sexual despair, despite their radically different beliefs. They haven’t done it done it or anything, and the actors have zero chemistry, but it’s fun to make sure all romantic encounters are kept entirely to characters we’ve already been introduced to.

Which brings us to Cal-O-Metrics’ Flo and her new successful, handsome spokesman Austin. Flo forces Austin to have sex with her as a condition of his employment, and we’re all supposed to be sort of OK with it because the only reason he wouldn’t want to sleep with her otherwise is because of her looks and age? Even though this is sexual harassment actually beyond whatever screwed up dynamic Virginia and Bill have, we’re supposed to laugh about it, maybe? Like, Austin loves having sex so it’s not wrong? This really didn’t read as consensual, despite Flo’s claims that Austin enjoyed himself “twice.”

Also problematic is Libby’s involvement in CORE. Robert asks her not to canvass for a rent-strike at housing project, but she shows up anyway and then is very successful. She really shows him how to canvas! He even changes his mind about having her come to the next canvas! She’s really saving this campaign. That said, there was a pretty good burn. Robert tells Libby to stay home because there are going to be lice in the housing projects, and we’ all know how much she hates lice. Remember? Because like five episodes ago she was a huge racist, but not anymore?

And finally, and still very strangely, Virginia confesses to the therapist that she is not Barb. The psychologist is unphased. He suggests maybe that Virginia wanted to talk to him all along about her guilt issues, because she has a relationship with a married man, but Virginia’s like “naw, it’s still for science.” The therapist says that Virginia has revealed two deceptions to him already and maybe she has a third: she is deceiving herself. Virginia’s like “No way,” but in the back of her mind, she’s thinking “maybe.”

Back to the problems of our white, straight, rich, middle-age male protagonist: he is still impotent. Virginia tries standard hand/mouth arousal techniques, which fail. She tries bossing him around, which almost works and is pretty hot, but then it fails. Virginia almost doesn’t want to fool around with Bill anymore. But then Bill picks a fight with his brother where he says that their monstrous father lives in them, and his brother beats the crap out of his face and gets him all bloody, which Bill does not wash off on the long drive to the Alton, Ill., or before walking through the lobby of the Plaza Hotel, but he does wipe all over Virginia’s face while crying about his relationship to his brother. This, which he could easily see in performance art at liberal arts schools across the country, was all it took to give him a proper boner. Congratulations, Bill. You are a man again. 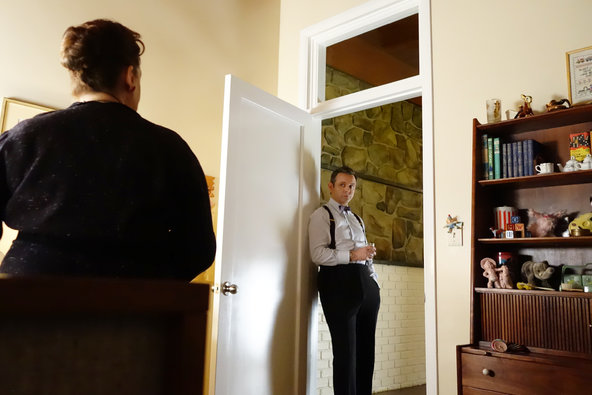