“When has self-awareness ever changed anything about a person’s behavior?” Flo asks Austin after a particularly weird sex romp. “Has it ever changed yours?” It’s a question that easily sums up the very poor decision-making at the heart of “One for the Money, Two for the Show,” a drama-filled blast leading up to next week’s season finale.

What kind of poor decision making? Let’s start with the somewhat self-aware Dr. Bill Masters. The episode opens with Bill and Virginia back at the hotel. They’re dressing, and it seems like they’ve boned, but they’re also rehashing last week’s bloody hook-up. Virginia thinks he was “charged up,” from all the emotional feeling he managed to do with his brother. He plans to write him, to apologize. He wants to reconnect! But he also doesn’t want to go through all the thinking about how he managed to do it, and certainly doesn’t want to credit his brother! He just wants to know how good it felt for Virginia. And so, they almost have sex again, and we discover that once again, Bill Masters is having boner problems.

Also, Virginia tells Bill to wear makeup to cover up all the bruises from the fight and he balks. This is a very important metaphor for Bill.

It’s bad timing, as he needs to be on top of his game. Bill and Virginia have agreed to do a CBS documentary about the study, on their P.R. man Shepp’s advice. In true historical TV fashion, we learn that they’re making the documentary right after the famed Nixon/Kennedy debate. Nixon won on the points, we’re reminded, but Kennedy just has that TV-ready twinkle. Who do you think Bill Masters resembles? This also allows for a “dick nick” joke. Ha ha!

The TV people are thrilled! They want to interview Libby, too! So she shows up with a tie that is not Dr. Masters (left behind by someone at a dinner party, Bill suggests). He puts it on. Uh oh, though, Libby is wearing the same color as Virginia. “What if it looks like a uniform?” she asks? But don’t worry Libby, it’s in black and white.

The TV people want Bill and Virginia to talk and be playful, but Bill is not feeling playful, so Virginia does most of the talking. She says she’s popular at dinner parties, which, really, between all the affair-having and the long parties, when are these people going to dinner parties? But the whole thing is making Bill grumpy, and at some point one of the sound guys tells Bill that he’s way too ugly to have sex with Virginia. It makes Bill feel even grumpier.

Lester is also grumpy. There’s no place for this truth-telling auteur among all these TV cameras. They can’t use any of Lester’s footage, because it either violates the confidentiality that Bill wants, or it’s too explicit. The TV camera man wants innuendo, Lester wants beauty/science/truth. He even confronts Bill, basically telling him that he’s totally sold out. It all makes Bill sweat more. Bill’s self esteem gets lower.

Besides the deflated sweatiness of Bill, Virginia has a whole other set of problems. Her ex-husband George has a new wife, and would like to take their two kids who have barely aged in three years to Europe on tour — and they’ll be gone for Thanksgiving and Christmas. Virginia says no, but at every turn she’s confronted with what a bad mother she is. She doesn’t know it’s her daughter’s big presentation on France, she doesn’t know what kind of cookies and vegetables her kids like, and when she rushes out at the end of a long night, it’s not to get back for “tuck in time,” it’s to go soft-squish with Bill in Altoon. So she relents. She’ll be spending Christmas without her children.

Every other character on the show gets to share in some bad decision-making. Flo has been forcing Austin to have sex with her, and on the wake of bad news — Clark Gable’s heart attack — she wants to recreate the scene were Rhett carries Scarlett to the bedroom. So she makes Austin “break in” to her house, but he proves incapable of making her feel truly “forced.” I’m pro being willing to safely support experimentation of whatever willing kind, but it’s particularly dark to have a man being forced to have sex with a woman pretended to force the woman to have sex with him. It would be a really interesting, clever statement on the part of the show if it didn’t seem like they were having Austin “come around,” to the relationship. This is still not OK.

Also not OK: Libby Masters. Libby comes to support Bill, and to be interviewed. She watches as Bill slowly becomes more comfortable in front of the camera. He and Virginia start easily falling into their partnership. They talk about finishing each other’s sentences, and, when the interviewer asks whether they’re mistaken for being together, Bill says they’re married to the work, not each other. But also not Libby. Meanwhile, Libby is hanging out with George and a bookie/keymaker who just moved into the office (who is “ironically” waiting for a bathroom key). George and Libby commiserate over Virginia and Bill’s dedication to the study, and Libby says she’s the “woman behind the man behind the woman behind the man,” and the bookie says it doesn’t sound like she wins in all this. Which is a lightbulb moment for her.

What bookie would tell his landlord’s wife that, though?

Libby uses this as a reason to go down and talk to Richard and the men at CORE. She’d caught them worried about the news — she assumes Clark Gable, but it’s Martin Luther King, Jr.’s Atlanta arrest. So she decides to help out, which mostly involves sitting around the radio and answering the phones “we don’t know anything.” As everyone leaves, she realizes she’ll have to call a cab, but Robert drives her instead. On the ride she turns through the radio to listen for news about King, stopping at a shmaltzy orchestra station. He says they won’t have King news, and turns to a jazz station. He asks her what the SCLC is, and she guesses wrong, and then she asks why he quizzes her all the time, and says she doesn’t make him feel bad for things he doesn’t know, like the meaning of the world dilettante. It is painful dialogue to hear.

Then it’s interrupted by a cop suspicious about a black man and white woman in a car in a fancy neighborhood. She “saves” Robert from the cop by bringing him inside, making him stand in her bedroom while she looks for a button, sexily sews the button on his shirt while he wears it (he would rather her not), and then he says the button is “too big to fit through the hole.”

Libby then unloads all of the feelings she’s ever had on the show on poor Robert. She says she’s always been the good girl, followed the rules, who might be prejudiced (really?!) deep down inside, and is so quiet that she is “invisible” to her husband … and that she likes Robert because he doesn’t like her, and then she kisses him against his will, and then they have sex on the floor (which he seems into).

Libby’s storyline this season is pretty much a long question as to whether she has really learned, and is legitimately trying to be a better person, or whether she is actually just the type of white woman Robert says sleep with black men “because they don’t like themselves much … like they’re lowering themselves.” You know, a racist. The ambiguity is cool, but the flaw is how the show uses Robert to get there. Besides fighting for civil rights and thinking that there is something wrong with Libby, the character is flat. He’s not the wretched Burt or his shockingly moving wife, he’s not the multifaceted Betty, and he’s not even the sweet-but-tough Pretzel King. He’s being used a prop for a white woman’s self-discovery, and it’s almost certainly going to end badly for him.

Speaking of unhappy endings, the episode finishes with a crushed, sweaty Bill Masters complaining that Virginia isn’t there enough for him, and I don’t know, maybe she should go home to her children who are about to go to Europe for six weeks. Virginia assures him that she’s there forever, hugs Bill and then cradles him on the floor like a baby.

He still doesn’t have a boner. 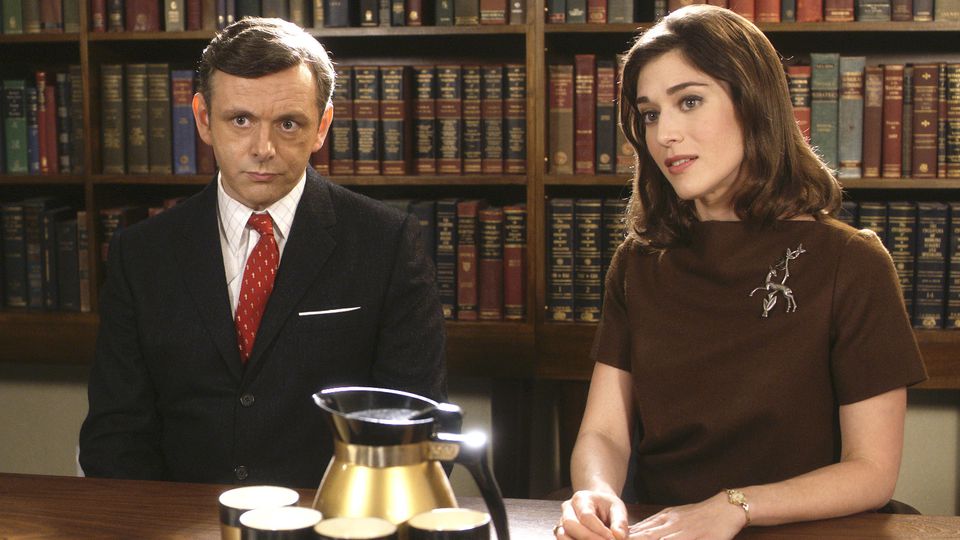