“Just because you’re born to one face, doesn’t mean you’re stuck with it,” says Frank in the beginning of “Mirror, Mirror.” He’s a medical school friend of Bill Masters, a plastic surgeon from Kansas City who’s decided that Bill is the only man who can help him and his wife conceive, but it’s probably a metaphor for changing your history, or something.

Masters seems cagey about the whole thing. Then again, he might be having trouble focusing because he’s impotent and he’s super distracted about it. Conveniently, in this three-years-later world, Virginia Johnson is very into investigating, and possibly treating, sexual dysfunctions, and for the entirety of the study has been collecting files on rejected applicants. We even get some hilarious flashbacks to people having uncomfortable sex that let us know that this is a “funny” episode. Virginia thinks that maybe each kind of male dysfunction has a female counterpart, but Bill doesn’t think so because impotence is so completely, totally common (it was the biggest pile of files!) and it happens to all men at some point, right? Like enough so that it’s barely even a deal?

In their attempt to cure impotence in the days before Viagra, they turned to an expert — Betty. Betty told them it was usually all in a guy’s head, and it made Bill sad. Maybe he’d be impotent forever?

Virginia is less concerned about impotence — she assumes last week’s romp had more to do with Bill going all Christian Gray on her than a physical problem. Her focus instead is on the female equivalent, as embodied by Barbara, Dr. Greathouse’s lover. Her vagina is “impenetrable,” and Virginia wants to help her figure out why, so she tries to help her without talking to Bill. She even goes so far as to crash Barbara’s lunch during work, and talk about sexual exploits in some diner. Virginia assumes it’s something from her past. She cites Freud — which, originally, wasn’t this study supposed to be sort of anti-Freud?– and they talk some more. Barbara’s mom told her God punishes bad girls for behaving amorally, and so on, and Virginia thinks she’s got a good start to understanding why Barbara can’t have vaginal sex.

And then Barbara shows up at Virginia’s house, starts crying, and tells Virginia that she used to have sex with her brother out by some creek, and Virginia realizes she’s in over her head.

Meanwhile, Masters is facing a huge tax bill, and needs to find board members so he can turn the clinic into a nonprofit. He picks, for some reason, the chief of police, and over a fancy dinner (with a requisite mention of “too expensive” $5 prime rib), Libby ends up offering to help the chief’s wife raise money for the Veil of the Profit dinner. Libby does an awesome job raising money, and even talks Flo, the queen of Calametrics, into donating money. On Libby’s way out of the office, she witnesses a bunch of white guys in a pickup truck speed past and then sees an African American man beaten, lying on the ground. Robert, Coral’s brother, is there trying to help the man, and he sees Libby drive off.

The police say the attack is drug related, but Libby has her doubts. Then Robert comes to her house and tells her that it definitely wasn’t drugs, and asks her to report what she saw to the police, who will see her whiteness as credibility. Libby says she hasn’t seen anything, but when she goes to the fancy ball she was raising money for, she’s tells Bill that they did see something. Bill said it’s not their cause, and Libby says this Veil ball thing isn’t their cause either, and that she wants something of her own. She ends her part in the episode by showing up at Roberts house and saying she’ll testify. Maybe all that being a horrible racist has gotten to Libby and now she’s going to do what’s right, even though it’ll probably upset the police chief, who will quit the board of the Sex Clinic once the Masters get “political.” It’s a little frustrating to think that Libby will have redemption so easily — and that she’ll be called a hero for it — but the alternative, that she is so heartless that she says nothing, is also terrifying.

We saw a lot of Flo this episode — she got a foot-rub from Dr. Austin Langly, and she hired a spokesman for Calametrics. She invites the spokesman to come to St. Louis to give a keynote to her salesforce, but for some reason there are no hotels actually in St. Louis (pop. 750,000 in 1960), so he stays at the Plaza in Altoon, Il., and literally eats himself to death. Masters is there not having sex with Virginia, and so is the doctor on call to see to the body, but don’t worry, he doesn’t get caught. Flo then hires Austin to be her new spokesman, which is probably the best possible job for Austin.

Finally, there’s that pal, Frank. He and his wife are having fertility problems because he has a low sperm count, which is a genetic thing he shares in common with his brother…Dr. Bill Masters! He’ll be sticking around to get treatment from Bill. It’s OK because his wife has found a great deal at a hotel outside of town. I wonder which one. 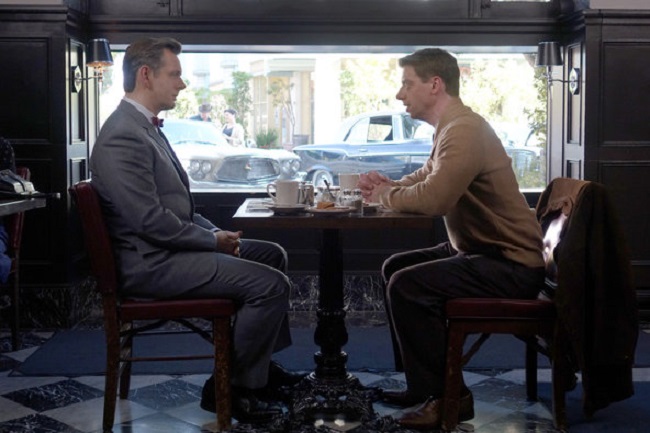