Sometimes I get the feeling that when Virginia Johnson and Bill Masters try to help people, maybe they’re being a little selfish? Maybe? In “Story of My Life,” helping doesn’t turn out the way they hope.

Let’s start with poor Barbara. Last week we discovered that her vaginismus — a condition which makes her vagina impenetrable — is probably caused by the shame she is carrying from her early sexual experiences with her own brother. In a super creepy attempt to help, Virginia has been impersonating Barbara to a psychologist, telling Barbara’s story as if it was her own. This psychologist now thinks that not only is Barabara someone who once had a sexual relationship with her own brother, she’s also a weird robot who is only capable of presenting her emotional history as a case file. The psychologist recommends that “Barbara” imagine what she wishes she could say to her brother that could change her history. Virginia finds this totally reasonable.

Bill is also bizarrely “helping” Lester with is impotence. Bill is impotent, and if Bill can somehow figure out how to get Lester’s rocks off, he reasons he can figure out how to start having sex again, too. So Bill and Betty find a prostitute to help a very reluctant Lester, convincing him that it is all for “science.” He needs to be with an expert, Bill says, to rule out incompetent partners. In what appears to be a hotel room somewhere other than the Plaza, Lester talks nervously about Gunsmoke and French New Wave. The only compliment he can think of is to tell the prostitute that she has the same color hair as his sister.

That is a really weird line to craft as a hilarious light joke in this episode that’s largely about how screwed up sibling relationships are, but maybe it was actually really clever and I just didn’t get the joke.

The prostitute doesn’t help Lester. Bill pushes him for details — how much manual versus oral stimulation, and so on, but Lester hated the whole thing. He wants to be with someone who cares about him. A sloppy writing turn then leaves Lester deciding the way to help impotent men would be to have two people who know each other’s bodies and care about each other have sex. A great setup for Bill and Virginia but makes no sense for something the very single Lester to say.

Bill’s attempts to help Barbara are also physical. He wants to insert a dilator into her vagina until her muscles relax, and he wants Lester to film it. Virginia insists that they won’t be able to do anything until they address Barbara’s emotional problems, but Bill says that’s over their heads — which is true, though his physical treatments also seem like a mistake. Bill wants it all filmed for the study, but Virginia does not. As Lester tries to set up, he looks at Barbara looking at herself through the two-way mirror and he can’t do it, because they are both being tortured by science to “help” the study. He walks away without taping it. Virginia gives the psychologist’s advice to Barbara — to pretend she can change the past, and think of what she would say to her brother if she could.

Virginia talks to the psychologist again, and in her attempts to be more human-seeming (and because she can’t remember anything about Barbara’s life), ends up sharing more than she meant to about her own life, and her relationship to Bill. She tells her about the affair with Bill and Lillian’s disapproval. Lillian saw things in black and white, but Bill and Virginia are all grey, she says, since she isn’t a threat to Libby, it isn’t a problem. But the psychologist does a judgy nod and Virginia starts feeling a little guilty. Libby later gushes over Virginia’s go-getter attitude, and then Virginia starts feeling really, really terrible about herself.

Libby is also trying a little insight, though she still seems pretty clueless about Bill and Virginia. She wants to testify about the racists she saw, but she didn’t see enough to help. Robert suggests that she’s not a convincing liar. Conversations with Pauline about Frank are also getting to her. Pauline describes Frank’s behavior — staying out all night, never having sex with her — and kicks herself for being so blind. Libby seems suspicious. But Pauline gives Frank an ultimatum, and it changes Frank’s behavior and makes Pauline proud of herself. This inspires the very selfish Libby to sign up to volunteer at CORE because she wants to do something no one expects her to do. So don’t worry folks — Libby is still racist, but now she has a complicated white-savior complex. We also find out that Libby and Bill met while Libby was a medical secretary, which puts an interesting spin on Libby doing work for Robert.

This is all probably leading up to something.

As Bill and Virginia try to help others Frank, Bill’s surprise brother, is trying to help himself. He’s still in St. Louis with his wife Pauline, and they have a totally normal family dinner with Bill, Libby, and Bill’s mom. There are a bunch of heavy handed references to just how much he is an alcoholic in recovery — Frank and Pauline tell a story about how much they wanted a fondue pot, but it turns out that fondue has a bunch of booze in it. Bill points out that the alcohol evaporates, and we’re supposed to pick up that Frank plays fast and loose with the facts. Duly noted.

Frank is just hoping to reconnect with his big, super-successful brother (who has a completely different accent than he does, but whatever). He invites Bill to hang out with some friends later. We find out that those friends are actually a group meeting of AA, where Frank is celebrating his “sober birthday.” Frank talks about his youth — mostly his horrible, abusive father. He tells a story about being pulled out of a car and forced to walk home in the rain. He talks about developing a great “disappearing act,” and then Bill walks out while Frank is still talking.

But memory, as we learn, is fallible, and easily rewritten. Libby learns this when the CORE lawyer tries to get her to alter her testimony to more firmly incriminate the racists who beat their treasurer. Barbara learns this when she misunderstands Virginia’s advice and actually talks to her brother. While she had painted a narrative that involved Paul, her brother, pushing her into sex, he remembers it differently: it was all Barbara’s idea. And in the re-remembering, she realizes that’s the way things happened.

She says, “I want to remember this as his fault, because I want to be absolved of responsibility for how my life has turned out.” Virginia has no idea how to take that.

And we learn this with Bill and his brother. Frank comes to confront Bill about leaving during his testimony. Bill accuses Frank of stealing his history to make his own alcoholism make sense. The long-suffering son of a sadistic father wasn’t Frank, it was Bill. And it Bill’s memory. Frank was the apple of his father’s eye. If Frank had to go through what Bill went through, Bill says, he would have never left him there. There’s some clever camerawork, with bottles of liquor in the foreground, and it’s nicely ambiguous — was Bill a cruel brother who is channeling his own philandering, sadistic father with his own family, or is Frank a golden boy who needed to manufacture a heartbreak that could make his own retribution possible.

After getting yelled at by Frank, Bill meets up with Virginia at the Plaza, but they’re both feeling too many feelings for fun. Bill has his family issues, but Virginia has straight up guilt. She can’t imagine how they can possibly justify what they’re doing to Libby. Virginia says it’s been years since they’ve even taken notes! (Another confusing bit of sloppy writing, since they weren’t having sex for the three years we moved through time, so they’ve only been fooling around again for the past few months.)

Just when it seems like Virginia might call it off, Bill has a stroke of genius! They’re going to solve real-life sexual dysfunction with their own personal work.

Bill confesses: he is impotent, and only Virginia can help him — and save the world from psychologically-induced limp dicks. Will Virginia take the bait? 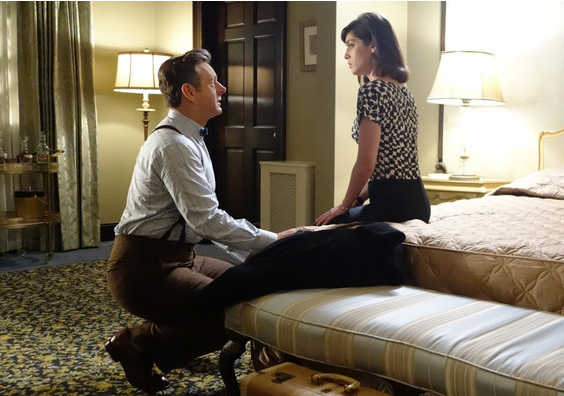