A slew of federal lawmakers and Mayor Bill de Blasio gathered near the World Trade Center this morning to call for the reauthorization of the Zadroga Act, a law that granted medical compensation and health care to survivors of the September 11 attacks.

The press conference, led by Senator Kirsten Gillibrand, was called days before the 13th anniversary of the attacks to highlight that the Zadroga Act’s two components will expire next October and in October 2016.

“For Congress to not continue to fulfill it’s undeniable moral obligation by reauthorizing these programs–they will close and our government will have turned its back on these heroes. That’s not who we are as Americans,” Ms. Gillibrand said.

The Zadroga Act, officially known as the James Zadroga 9/11 Health Care and Compensation Act, passed in 2010 with bipartisan support. The state’s congressional delegation is hoping to reauthorize it for 25 more years and insisted it’s still a bipartisan issue, alluding to the increasingly polarized mood of Congress where little legislation passes with the backing of Democrats and Republicans.

“This is not a Republican issue. This is not a Democratic issue. This is an American issue,” said Congressman Peter King, a Long Island Republican. “We have an obligation as Americans to provide them with the health care that they need, the families the compensation that they need. And again, we all say we’ll never forget 9/11 but if we forget the victims of 9/11, we have forgotten 9/11. We cannot allow the enemies to win.”

Many first responders and people near the World Trade Center site in the aftermath of the attacks contracted a variety of illnesses, including cancer. The original $4.3 billion bill was whittled down from $7.4 million to pass Congress and only succeeded after years of debate. Ms. Gillibrand and other members of Congress could not say how much the reauthorization would cost, but argued even police and firefighters with full health benefits needed the additional funds for expensive, long-term illnesses. (They also did not make clear exactly why 25 years, and not more or less, was chosen.)

The pols, who spoke along with unions heads like Patrolmen’s Benevolent Association President Patrick Lynch and Vincent Alvarez, the head of the Central Labor Council, also argued that people suffering from September 11-related illnesses were not confined to New York, making the Zadroga Act a national cause.

“The people who came to serve did not just come from the five boroughs, they didn’t just come from the metropolitan area – they came from all over the country,” Mr. de Blasio said. “Almost every congressional district in this nation had representatives come here. People – first responders – came here.”

If the act fails to be reauthorized–Ms. Gillibrand wouldn’t place specific odds on its passage–it will be a great failing for the nation, the elected officials argued.

“We cannot allow it to be said that in 13 years, that’s how long we remembered 9/11. We set up a museum, we gave lip service to it but we forgot the victims in 13 years,” said Congressman Jerrold Nadler. “We cannot allow that to be said. It would be a moral stain on this generation and on the United States.” 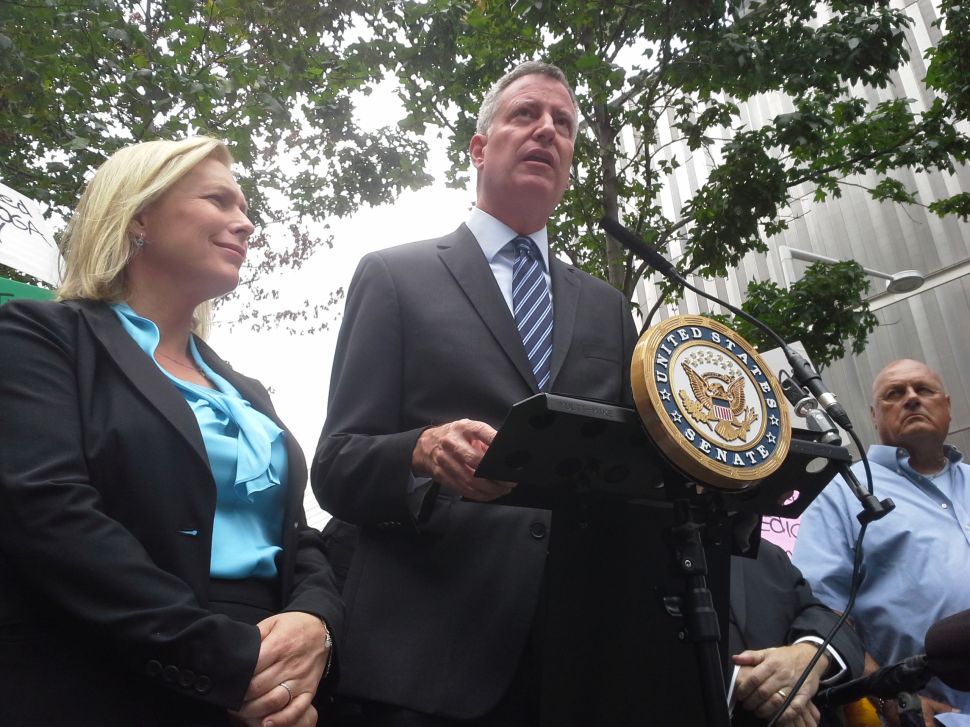